Polarisation: The Road to War 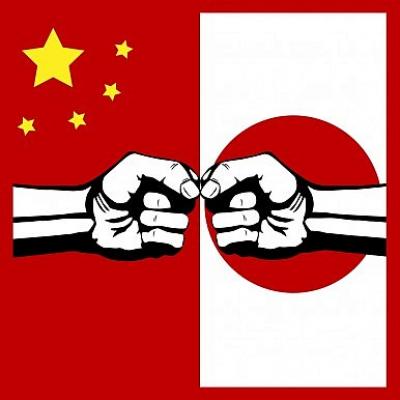 The Tie that Binds

In physics, ‘polarisation’ has two main meanings. The first meaning labels the division of two sharply distinct opposites, such positive and negative electrical charges or a magnet's north and south poles. This is not the meaning that I have adopted. Sadly, the public has also borrowed ‘polarisation’ and uses this first meaning to describe a rift, a deep division, a chasm in public opinion, left and right, socialist and capitalist, woke and anti-woke, rainbow-waving and hetero-normative. Thus, we hear the lament that we have never been so ‘polarised’.

The second physics meaning of ‘polarisation’ applies to transverse waves; waves that move in a direction perpendicular to the direction of the advance of the wave. When a transverse wave's vibrations orient and confine themselves to the same plane, they are ‘polarised’. The laser's immense power and utility result from its ability to produce a polarised wave at a single frequency. In contrast, a torch (flashlight) produces non-polarised light of many varied frequencies; consequently, its light lacks focus and power. Polarisation imparts power.

Individuals, cultures and empires can be similarly polarised: that is, they can define their values unanimously and cohesively, bonding as a single society and focusing their energies against a perceived threat from a competing system. Competition can bind a group by leading it to establish a common goal.

As competition increases, however, withdrawal from amicable relations increases. Inevitably, an extreme hardening of differences leads to conflict. Both at the individual level and the group level, most will have experienced it in one form or another. Polarisation between nations and empires leads to war, with the peoples' collective values growing extreme, achieving a near-religious sanctity.

Polarisation can act as a positive force that is expressed, for example, through community self-improvement or in team-based contexts, such as sports. However, as competition increases between two groups, withdrawal from these amicable relations becomes more pronounced, and a hardening of differences leads to inevitable conflict. This process occurs at the individual level as well as the group level, and most people will have experienced it in one form or another. Polarisation manifesting at the level of nations and empires leads to war, with the collective character becoming more extreme or fundamentalist in its values. In the process, killing other human beings becomes justifiable because they (the opposition) embrace values that are anathema: they are ‘the enemy’ and no longer viewed as human.

Genghis Khan had a masterly understanding of this mechanism as he understood the power of unity, i.e. positive polarisation. Prior to his rise, the Mongols had been controlled by the Jin Dynasty, which exploited their tribal enmities to play one tribe off against another. The young Genghis, an outcast from his tribe upon the death of his father, bound the stragglers from his tribe into a new combat-ready force, ready to fight their traditional enemies, the Tatars. He then continued to amass his army until it was able to challenge the tribes that dominated the region and, finally, using the threat of the Jin to unite all of the tribes and create the Mongol nation, a nation that rode out of the steppes and conquered the known world. Today, Mongolians view Genghis Khan as their George Washington. In contrast, students in China are taught that he was a Chinese general. Historical perspective always has two sides!

By consigning some parts of its history to oblivion and holding onto others for centuries, a people's history can be and must be highly selective, if it is to further the group’s sense of identity and purpose. History, in furtherance of its aim of positive polarisation, often stresses the negative, darker aspects of the collective memory and past enemies, to ensure that it has a decisive advantage; in other words, it almost always highlights the past enemy’s despicable characteristics and emphasises fear and revenge.

At times, extreme polarisation (war fever) approaches madness. During WWI, the British royal family sought to cover its German heritage and changed its name to Winsor. On the streets of the UK, German breeds of dogs were killed, thereby preventing small Dachshunds from spying for the Kaiser. The larger German Shepard, a tougher dog to beat to death, escaped this dismal end by being renamed the Alsatian breed. In America, Governor William Harding banned the public utterance of all foreign languages, even on the phone. (Perhaps apocryphally, prayers were only to be in English, as God refused to hear another language.) American schools stopped teaching German. ‘Sauerkraut’ was renamed ‘liberty cabbage’; German measles, ‘liberty measles’; streets named ‘Berlin’ in the USA were renamed – all of this in spite of more Americans being of German descent than English.

Why? Because polarisation is essential to defining a society’s sense of self and its core values, so it can mobilise its population into winning wars. We need only recall the American war in Vietnam to see how a want of national polarisation led directly to defeat through loss of political intention. 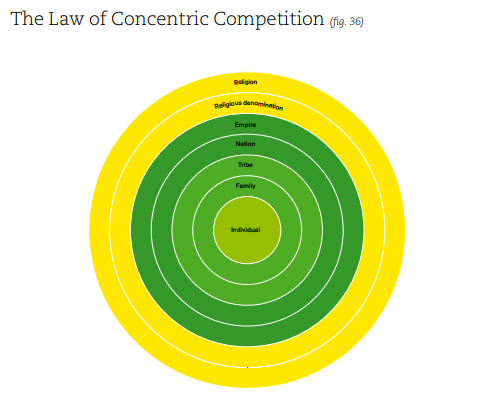 The Law of Concentric Competition

Humans are social animals, forming family and tribal units rather than existing as lone hunters. This is probably a necessary characteristic of human evolution, owing to the years of nurturing required by our offspring. As a result, tribal behaviour is hardwired into our brains, generating a powerful need to belong to a greater whole – the tribe being among the earliest units of this commonality. Yet the tribe is not simply a group of humans but a complex social structure with unique cultural values that differentiate it from others. Over time, we have developed larger, more complex social structures. However, our social conditioning still drives us to associate with other humans and absorb memes that define us as individuals and the group to which we ‘belong’.

The law of concentric competition (see Figure 36) recognises the fractal structure of human organisations and the human need to belong to a social group. The circle describes the smallest unit at its centre as the individual, widening to encompass couple, family, tribe, nation, empire and religion. For polarisation to operate, at least two competing groups are required. Any group inside the circle will compete with another at the same level – from individual to individual, to religion to religion. However, when competition from outside enters the circle, all units inside it may respond by binding together to neutralise the threat. Thus tribes may compete within a nation, but can be united against another nation, as Genghis Khan and many other leaders have realised. (It is known in popular culture, too: a recurring science fiction theme, for example, has the warring inhabitants of Earth uniting in the face of an alien invasion.)

In accordance with the law of concentric competition, two memes that are used as vehicles for social polarisation are nationalism and religion. The first is based on the chain of obligation to, and reliance upon, other humans in our largest social structures, beginning with family ties and extending to imperial loyalty. The other transcends the bonds of social responsibility – it trumps all other memes, defining a group at the highest level by the gods that it worships. It lies outside the concentric circle for this reason.

The Mechanics of Polarisation

Polarisation is driven by an empire’s underlying demographic trend, which in turn, as we have seen, underlies the Five Stages of Empire (see Figure 37). Empires in their expansionary stages can be said to be experiencing primary polarisation. The youth, confidence and appetite for risk of the dominant regional power characterises primary polarisation as it ascends to empire. Empires in their contraction phase have passed their peak and can no longer rely on the law of concentric competition to consolidate their national energy. Civil war is one predictable result. When an empire is facing decline, its energy is focused on maintaining the status quo. The empire is characterised by conservatism, protectionism and aversion to risk. This is secondary polarisation.

The consciousness of any collective can be shaped and directed as a larger fractal of the individual, with a similar, if not more basic, psychology. Just as an individual displays a range of responses to a threat depending on character, physiology, age and the type of danger, so does a group. Under stable conditions, rational responses predominate. In situations where survival is at stake, very extreme behaviour can result in which the destructive side of human emotional response can be witnessed on a collective scale.

Tribal dynamics are such that the majority of the group behave as an unthinking herd, its direction decided by a few individuals who usually coalesce into two dominant groups battling for control. (As discussed in PAST, the right leadership often emerges from a collective at certain junctures during an empire’s cycle to help protect or redeem it.) But the majority are not merely passive; it is the needs of the collective, after all, that produce leaders to act in the best interests. Group dynamics occur on many subtle levels.

Constituent Factors and the Polarisation Cycle

The process of polarisation is determined by three interlinked factors, as follows. 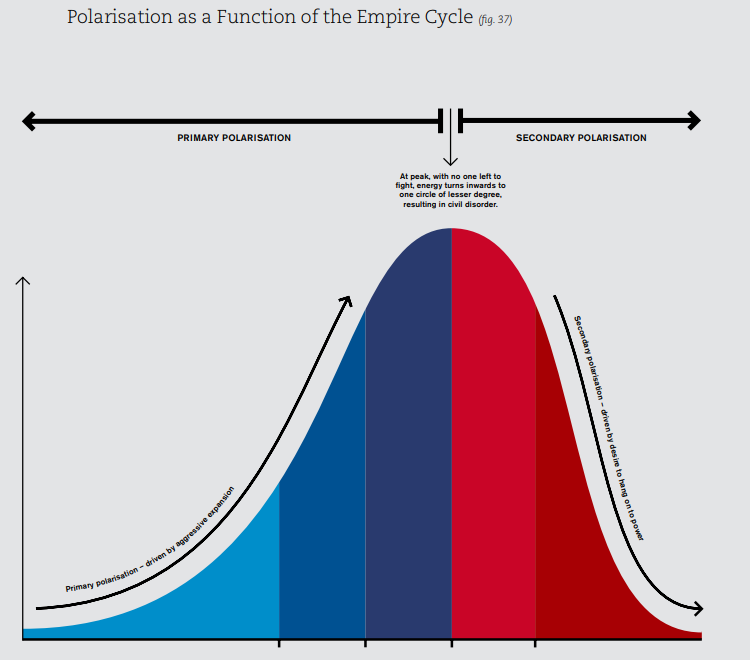 The following factors in turn impact on every stage of the polarisation cycle.

In today’s world, the reader need look no further than to China as an example of a rising empire in primary polarisation going through stages 2 and 3 with the suppression of the Uyghurs and population of Hong Kong. On the other side of the equation, America’s response to China’s rise is clearly one of secondary polarisation.