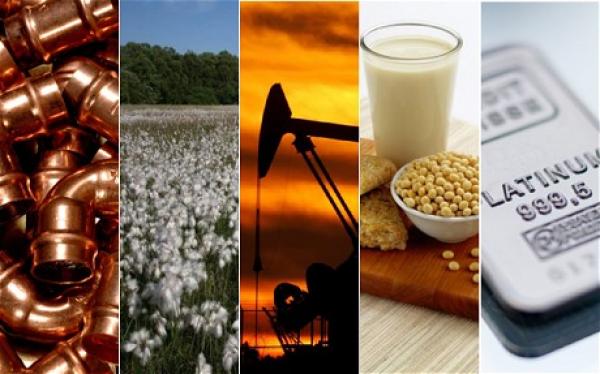 The fundamental premise of the Five Stages of Empire model is that throughout history, human beings have conducted their affairs according to specific patterns, repeating them without conscious awareness. The patterns operate over the long term, but, consistent with fractal dynamics, shorter-term patterns can also be observed. Put quite simply;  Commodities are The Fuel of Modern Empires and resources are the main reason why humans fight each other.

The brilliant Soviet economist Nikolai Kondratiev followed a similar logic, positing that human behaviour and response constitutes a critical factor in determining cycles of prosperity. (He exerted considerable influence over the Soviet economy until 1927. Arrested in 1930, he was executed eight years later during Stalin’s Great Purge.) In the mid-1920s, Kondratiev studied Capitalist market economies and developed his K Wave Theory, which proposed that alternating cycles of rising or falling commodity prices (plotted as sinusoidal K waves) follow a set, predictable pattern in economics. K waves, according to the theory, averaged approximately fifty-three years each. 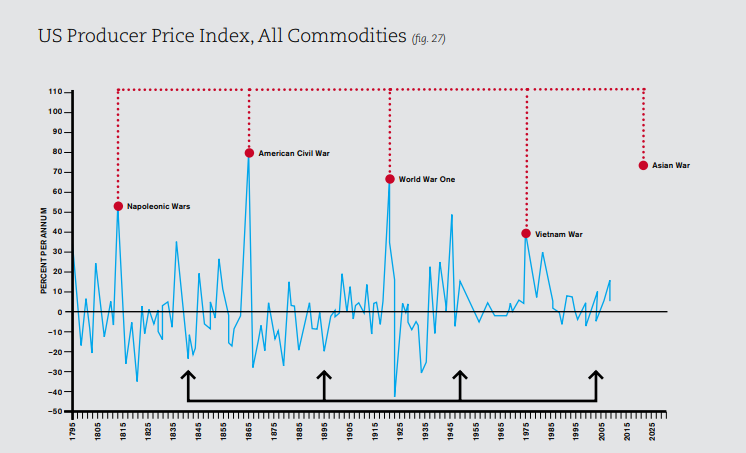 In practical terms, a K wave represents around twenty-five years of mounting commodity prices, peaking before entering a deflationary or downward cycle for another twenty-five years. It follows that a consumer society dependent on raw materials at low input prices would suffer during the first part of the cycle, as the cost of commodities appreciated. An economy supported by the extraction and export of raw materials, on the other hand, would benefit. As discussed, access to commodities is critical in determining geopolitical power; in the ascending part of the K wave cycle, therefore, competition for resources pushes up commodity prices, increasing geopolitical friction. This dynamic results in significant conflict risk at the end of a cycle – for example, the Napoleonic Wars, the US Civil War, World War One and the Vietnam War.

Empires that are in the process of building their power on commodity production are positively affected by peaks in the Kondratiev cycle, while industrialised empires that heavily consume commodities are affected positively by troughs. The corrective cycle therefore significantly influences where a given empire can be situated within the Five Stages of Empire model.

The Cold War makes for a good case study of a K wave in terms of the geopolitical ramifications of the theory. The US, which by 1945 had outgrown its indigenous supply of resources and was dependent on large-scale importing, squared off against the commodity-rich Soviet Union, which derived its wealth from commodity prices. Soviet power relative to the US peaked at the time of the Vietnam War – the Cold War’s main proxy conflict. The USSR then slid into a twenty-five-year decline, attaining its lowest point in 2000. This slump accelerated from 1980 onwards, following the Soviet invasion of Afghanistan. The US formed a partnership with anti-Communist Saudi Arabia to suppress oil prices, with the intention of bankrupting the USSR, a strategy that could only be achieved during an underlying bearish trend. Since 2000, by contrast, there has been a reversal in the relative power aspirations of Russia and the US. This can be expected to continue over the next two decades.

As a commodity cycle builds towards its peak, limited supply and increased demand cause prices to rise. Consumer nations compete at such a level of intensity that conflict is engendered (see Fig 27 above). Prices then soar even more vertiginously, creating a clear commodity spike. Alarmingly, the most recent cycle began only in 2000, yet by mid-2011/12 it was already exhibiting qualities (namely, the level of competition) that would normally be present at the end of a K wave. Swollen and rising levels of population and industrial demand have taken us to the limits of resource availability. Oil is, of course, the most glaringly representative commodity in this context, and food is likely to be next. This commodity cycle is unlike any other economic phenomenon ever observed; there are simply not enough resources to accommodate the global population. The situation is one of the utmost seriousness.

The Three Phases of the Current K Wave

Both the upward and downward cycles of a K wave break down into three phases: the A wave, the B wave and the C wave (see Figure 28). Each phase can be observed in the current inflation phase that began in 2001 and can be expected to peak in 2025/27. 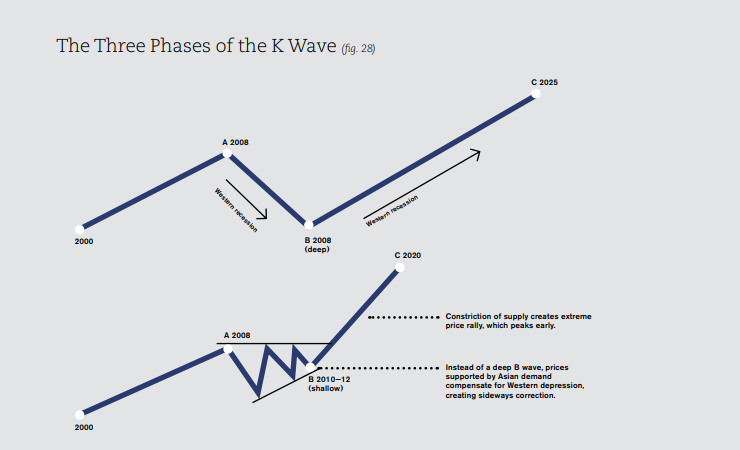 The A wave
The current A wave occurred between 2001 and 2011. When accelerated Asian demand for resources during China’s new ascendant phase was added to the stable Western demand cycle, the commodities sector became re-energised after some twenty-five years of decline in productivity. The inflationary cycle first began in the energy sector, with oil, and then spread to basic metals as new construction in China pushed up prices. In the final stage of the rally, it moved into the soft commodities sector. The most recent rally (concerning just the A wave) pushed global commodity markets to new highs, well beyond the 1975 peak. An A wave can be considered as the first warning sign that there are too many people chasing the same limited resources.

The B wave
The B wave of the present cycle commenced in 2011/12 after oil reached an all-time high of $150 (within a year of the 2007 ‘credit crunch’ financial crisis). The resultant demand foroil has had a global effect but is centred on the US economy. Usually, such a deflationary phase would be expected to end a decade later (i.e. in 2019/20), but this may not be realised. Over the next two decades, as the B wave takes effect, the US will undergo an economic depression, recession will linger in Europe, and China will continue to consolidate its gains and advance relative to other world powers. Pressure on commodity prices will perpetuate high input prices, and in the West, stagflation will set in: economically, the worst of all worlds. In this environment, China will hold its own, sustaining moderate growth. The West, on the other hand, will contract in growth and will experience the attendant social consequences of decline. Commodity-exporting nations (particularly those with oil resources) will continue to prosper as long as their economies are well managed and their budgets balanced. Strategic lessons can be learned from A and B waves: countries must invest in resource acquisition to prevent the consequences of a C wave. However, with the West in decline and on the brink of impoverishment, only China and perhaps the Gulf states will adopt this approach.

The C wave
The C wave of the current inflationary cycle can be expected to commence in 2019/20, when mechanisms of supply and demand will be more intense than at any other point in recorded history. Global competition for resources will become feverish and there will accordingly be a high risk of conflict, and even the risk of another world war. China, Japan and India may well clash, and China may seize the opportunity to assert itself as the new dominant global power.