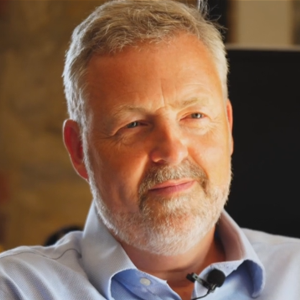 David Murrin began his unique career in the oil exploration business amongst the jungles of Papua New Guinea and the southwestern Pacific islands. There, he engaged with the numerous tribes of the Sepik River, exploring the mineral composition of the region. Before the age of adventure tourism, this region was highly dangerous, very uncertain and local indigenous groups were often hostile and cannibalistic. David's work with the PNG tribespeople catalysed his theories on collective human behaviour.

In the early 1980s, David embarked on a new career, joining JP Morgan in London. Watching his colleges on the trading floors, he quickly identified modern society also behaved collectively. He was sent to New York on JPM’s highly rated  internal MBA equivalent finance programme. Once back in London, he traded FX, bonds, equities and commodities on JPM’s first European Prop desk. In 1991, he founded and managed JPM’s highly successful European Market Analysis Group, developing new behavioural investment techniques which were utilised to deploy and manage risk at the highest level of the bank.

In 1993, David founded his first hedge fund, Apollo Asset Management, and, in 1997, co-founded Emergent Asset Management as CIO. His primary role was overseeing trading across all fund products as well as being particularly active in the firm’s private equity business. He co-founded Emvest, Emergent’s African land fund, in 2008 and acted as its Chairman until its sale from the group in 2011. In addition, through Emergent’s Advisory Business, David was responsible for the critical fund-raising for Heritage Oil, allowing it to expand significantly by investing in its Uganda exploration programme. He took full control of Emergent in 2011, combining his management of the Geomacro fund with the role of Chief Executive Officer until 2014.

David has been described as a polymath and his career of more than three decades has been focussed on finding and understanding collective human behavioural patterns including deep-seated ‘patterns’ in history and then using them to try and predict the future for geopolitics and markets in today’s turbulent times. He has a remarkable track record.

David’s advisory and future trends speaking is based on his direct investment experience combined with a framework that can be used to explain and qualify decisions within an investment team, aid risk assessment and reduce biases in collective investment decisions.

Since his early thirties David has owned and raced the famous classic racing yacht Cetewayo. The vessel is occasionally used as part of senior management team strategy days as part of David's leadership programme.

David is a keen racing and classic yachtsman, co-founding the British Classic Yacht Club in 2002 which has grown over the past decade into a substantial organisation. He was the Vice Commodore and then Commodore of the Club, resigning in 2019. Visit Zulu Yachting for more information.

In the desire to share his observations and predictive constructs, David has written four books.

Breaking the Code of History recognised that post 9/11, the world changed in an instant. Using his theories of human social structures, David was able to successfully predict back in 2007 the key process in human social structures that have impacted today’s changing world, including the decline of America and the West and the rise of China, and the reality of climate change.

His second book, released in 2018, is Lions Led By Lions which examines Britain’s misunderstood involvement in the First World War and the achieved learning curve of its Army's leadership that resulted in a war-winning British Expeditionary Force rolling back the German Army in 1918. The story provides clear lessons that should be applied by today's leaders concerning the deterrence of global conflict.

David's third book is a call to arms, in which his Now or Never UK Defense Review highlights the clear and present threats faced by Britain in the years and decade ahead from Russia and especially China, and the urgency for the need for large-scale rearmament to secure the future peace.

David's latest book Red Lightning integrates fact and fiction and describes from a future perspective how China wins WWIII in 2025. It is a sober warning to the leaders of the Western world that peace will only be maintained by a hard-won deterrence of aggression.