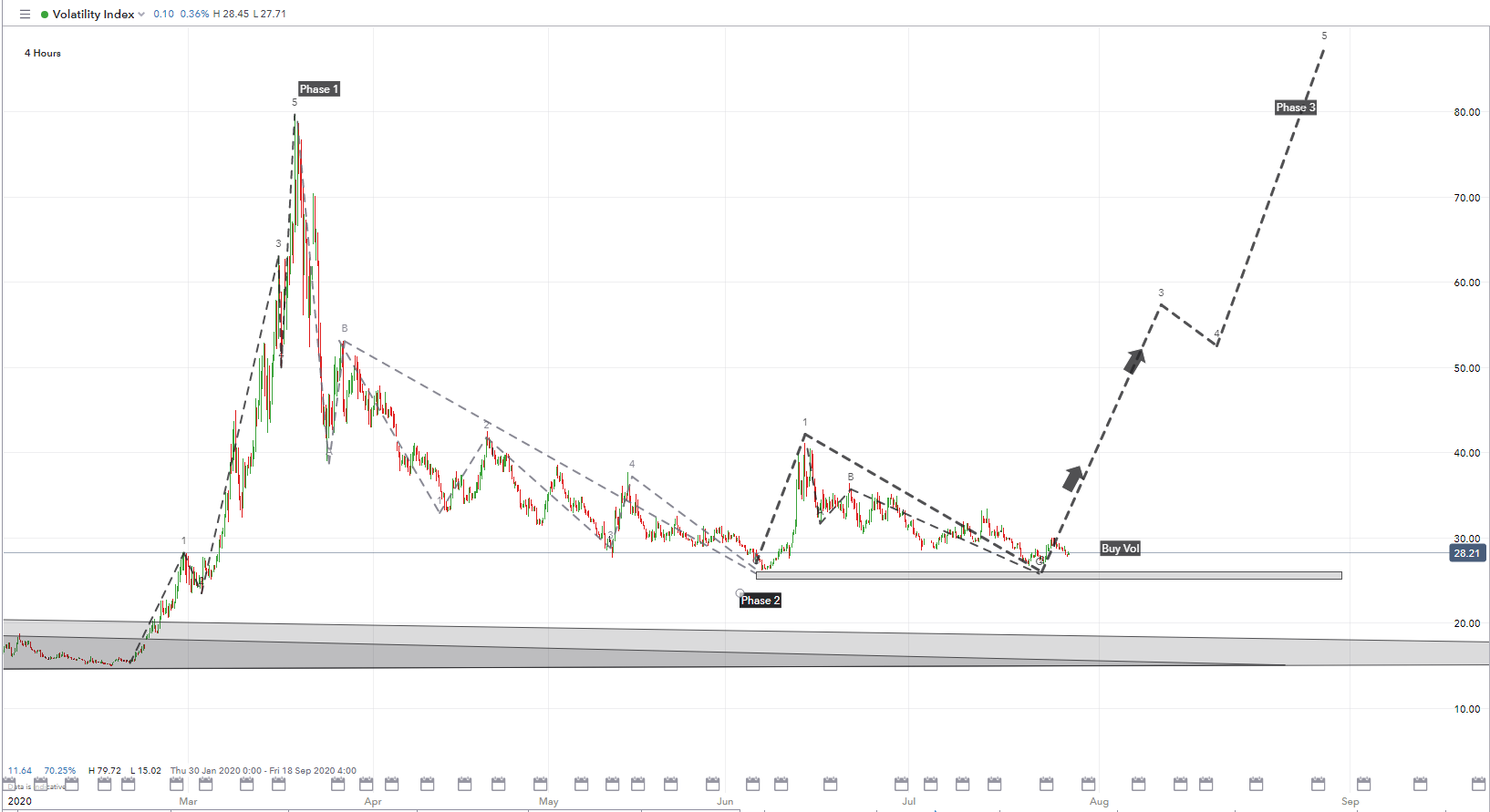 The above chart of the VIX shows that Phase 3 actually commenced in June, and has double bottomed in a wave 2. From here we expect to see a sharp increase in volatility.

Our suggestion that the quiet period over the past weeks was in reality the pause before significant movement, has indeed proved to be correct.Indeed during the past week, my Phase 3 scenario has moved into high gear.

The core element is that the Dollar's weakness has unleashed itself with acceleration to new lows on the year in a dynamic trend. Significantly this has been lead by the Dollar Index and Euro moves. However, of note is that Dollar Yen is moving lower in a major risk-off signal and Cable is on the cusp of a multi-year break out. The Bunds and especially T Notes have all broken upwards on their way to a last negative yield rally, before moving into a sovereign debt crisis. Whilst Gold and Silver moved into a higher gear as the broad market realises that they are a safe haven. Silver especially has way more upside as an industrial metal once more becomes a financial metal.

Of great significance is that the stronger equity markets have reversed downwards whilst the Dollar has been weakening, reversing the correlations over the past few months and thus one of the signs that we have been looking for to confirm phase three is in play. In Europe the EU Rescue fund is too little too late and as such its arrival marked the high of the Phase two correction in the stronger European equity indices. For those that choose to buy the EU bond issue they should be asking themselves what recourse will they have when the EU fractures?

Meanwhile, the weakest equity markets like the FTSE and Spain 35 have been building up a head of steam to break sharply lower. I would conjecture that if the FED had not put so much money into the market then the US stock markets would have looked like the FTSE in a best-case scenario. My view continues to be that we will see Phase three descend lower than the March lows to 70-80% of the value in February, by the year-end or at the latest Q1 2021.

Charts of The Dollar Index, Silver and FTSE in which we have been running max sized positions which are now deep in the money

Notably, I expect an acceleration of pandemic numbers in the US. Most of all I believe that with the perception of the Fed PUT making investments an apparent dead cert, everyone is max long and only a few smart investors are boldly short. The longs are in my view the walking dead as is Trump's presidency. Note the risks of a stock market crash decline are extremely high, as delusion and reality meet. As for the reason as to why stock markets should turn lower, one must be reminded that the five crises of American decline are all in play and any one of them may accelerate from a festering sore into a crisis from nowhere.

Are on the cusp of breaking to the upside in price in Bunds and US T Notes. This will be a dash to negative yields from the current 0.6% to -0.3% as the reality of the US  economic collapse hits home. Note the bond market is much smarter than the equity market. However, once yields have gone negative the next phase will be a sovereign debt crisis due to the massive debt levels incurred by the response to the pandemic compounding the already high debt burdens. The only concern we have is the timing of the Chinese selling of their US bond holdings in tit for tat action over America's response to the annexation of Hong Kong. At present, I think the move to negative yields could take place in the next months before Chinese bond selling.

Have both broken higher before  Bonds and coincident with the Dollar. After a period of lateral corrections, these two metals have accelerated to the upside as per my expectations and have a long way to go as the trend accelerates.

Has accelerated to the downside as I expected. Especially as the move to negative rates removes and Dollar carry advantage. Dollar Canada is our favorite risk off-trade and is close to its key break out levels at 1.3600. Note that the Empire pair i.e Dollar Yuan has broken lower and is a refection of Chinese repatriation of Dollar assets. Going forward with the  Bifurcation we have been predicting for 12 months. China will be forced to reduce its exports and thus can allow its currency to strengthen allowing it to buy raw resources at a lower price for its increasingly domestic economy and arms building program. Meanwhile, Cable is close to a very significant breakout that will quickly reach 1.50 to 1.60.

The MSCI along with other EM stock markets has been very correlated to the SP500 and similarly is ready to decline from current levels in the Phase 3 decline. What is fascinating is that the Dollar/EM currency pairs turned earlier than the stock markets complex by a week and have been coiling for a major upside break (EM currency weakness) to new highs.

Have been behaving like equities with coincident timing and oil especially has put in a high and should fall down to sub $30. Natural gas has already dropped and is on its way to a final low well below current levels. I expect all the base metals to see dramatic drops in the months ahead as demand collapses again.

Our scenario that the Phase 2 high was on 9/10 June in all but the US Tech Indices, looks stronger this week after the Nasdaq blow off high. In the weaker indices, we have seen coils of 1,2 build energy that I expect will uncoil to the downside. Notably, the DJI is weaker than the SP500 index. We are also short the Asian indices, and our favourite is Hong Kong. Expect weeks ahead with the price accelerating to the downside as it progresses. Note the risks of a crash decline are extremely high, as delusion and reality collide.

We are keen on three sectors.

Of note is that Tesla looks to have made a high and reversed (we are short) and all the strong US stocks that drove the corrective rally are now reversing.

Our Arkent roadmap is once more proving very accurate. To summarise we have completed phases 1 and 2 outlined below. Which means that we are now in phase 3. This is where the delusion that the world is going back the way it was, is dissolved and price and reality ultimately converge.

Part 1 Deflation - The Fall Of The Old

Part 2 Inflation - The Rise of the new

Phase 4 – Hyperinflation and the build-out