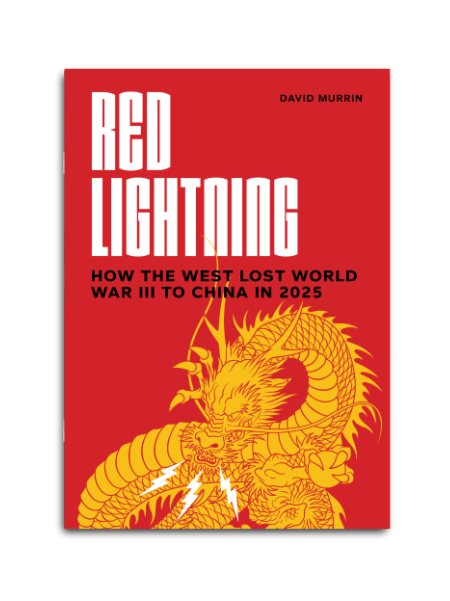 Written in 2021 'Red Lightning' is a work of fiction which reads more like a political forecast than anything else. Set in three year's time, the book is based on a plausible and disturbing scenario for the 21stcentury, a third world war instigated by China. The author, David Murrin, also describes how China following a 50-year plan to dominate the world by 2048. He has previously warned about China's power rise in his masterful survey of human history, 'Breaking the Code of History'.

His fiction is believable. In reality, the tentacles of the Chinese Communist Party (CCP) have been growing for decades. China's military forays into the South China Sea show that some of Murrin's predictions have come true already. https://www.conservativewoman.co.uk/china-rampant-on-land-and-sea/

'Red Lightning' is only 50 pages long, but every single one of these is packed with essential information and gripping accounts of war. China starts WWIII when it attacks the naval forces of Russia and Western allies. But before this happens, Murrin sets out the factors which led to the decline of the West and China's ascent, tracing this back to the Barak Obama presidency.

Early in the narrative he makes a crucial point about how the Chinese system reveres the qualities of  'knowledge and academic capability' in its leaders, unlike the West. Herein lies the downfall of Western civilisation, with most of its political class showing how venal and obtuse they are, especially in comparison to members of the CCP. This surely is one of the reasons why the CCP found it so easy in early 2020 to sell lockdown propaganda to the West.

Because it is a work of fiction, no reference links are provided in the writing to back up historical facts. So only those with a working knowledge of the CCP and China will be able to judge for themselves what Murrin gets right on details, such as President Xi Jinping's family background.

But what is obvious in the book, even to the most naïve, is that the outsourcing of Western manufacturing to China, driven by greedy industry owners taking advantage of low wages there, has been disastrous for the West. China has enriched itself, using slave labour in its concentration camps to make shoddy goods which are then sold back to Westerners, increasing the country's wealth. https://www.conservativewoman.co.uk/chinas-open-season-on-christians-with-the-blessing-of-the-west/

The CCP's colonialist endeavour, the Belt and Road Intuitive (BRI), has also allowed it to destabilise the US and control large parts of world economy. (https://www.conservativewoman.co.uk/dirty-chinese-money-funds-the-blm-fanatics/

Murrin's prediction of an economic growth spurt for China is not fictional, it's accurate. The comparison in the book between the economic crisis and subsequent high inflation in the West, and China's accomplishments in becoming a self-contained, militarised economy in 2020 rings true. But he considers Covid-19 to be a major factor contributing to the rise of China and the death of Western civilisation, a slight misjudgment given that it's not the virus to blame but the response to it. The export of anti-science, authoritarian lockdown propaganda by the CCP, implemented by an assortment of gullible fools and traitors, exacerbated this shift in global hegemony and led to the self-inflicted demise of the West. The sphere of influence and power of the CCP over Western nations, once the last bastions of democracy and freedom, is depressing, both in fiction and reality.

The book depicts how China took advantage of its new economic power and built a strong military force, easily conquering a weakened West. A believable account given that in our real world the CCP has conquered the West without firing a single shot. Having sold lockdown propaganda to gullible Westerners, they have overseen a conquest which would have been unimaginable ten years ago, to most except Murrin. China rises while the West dies.

Murrin outlines a credible fluctuating truce between Russia and China, and a subsequent uneasy alliance between Russia, Asian and Western countries. These rivalries and alliances lead to a new arms race, resulting in the military bombardment of the West and Russia by China. The latter wins; a viable and scary prediction.

Once Murrin has set the scene for WWIII, the latter parts of the book are devoted to the conflict itself. Murrin is an expert in describing weaponry in accessible terms. As a novice in this genre, I certainly found these interesting and learnt a lot from his detailed depictions of new technology in warships, missiles and guns in this new arms race. Those with more knowledge will find it fascinating to compare this fictional account to contemporary weaponry.

Battles between China, and allied forces in the Western Pacific and Northern Atlantic are written convincingly. Military enthusiasts will love it. I enjoyed the descriptions of battles not only on earth but in space too, with China dismantling and destroying important satellite systems.

Murrin also shows the influence which the CCP holds over the World Health Organisation. Whether China released Covid-19 on purpose or not hardly matters, the consequences are still the same; an obliteration of human rights and Western democracies, economies and societies. This is not fantasy but reality. Being an ardent Breixteer myself I liked his positivity about a thriving post-Brexit Britain, and his vital point that the EU compromises itself through its trade agreements with China.

A commendable narrative strategy by Murrin is his use of notable historical events in comparison to the CCP's game plan. Xi's five-year plan is mentioned in the context of  Adolf Hitler's four-year plan. A comment on the battle of Pearl Harbour enables the reader to imagine the scale and devastation of the naval battles between China and opposing allied forces. instead of feeling like a fictional abstract, WWIII becomes palpable and relatable through this clever literacy device.

I also liked the historical revisionism, such as the fictional change of Russian presidency. I found it interesting to imagine decisions and choices leading to alternative versions of history.

The book ignited questions for me that I would value Murrin exploring further. Who would the countries of Africa and South America align with? Given the fervent colonialism of the BRI in Africa, it's not impossible to think that countries from that continent would align with China in WWIII. In the book Australia and New Zealand side with the Western alliance and Russia, but given that both countries are now police state satellites of China, I found that to be a jarring note.

I also disagree with Murrin's assertion that Islamic fundamentalism isn't as dangerous as the CCP. https://www.conservativewoman.co.uk/while-the-west-obsesses-over-covid-islamic-state-is-on-the-march/ Both are equally dangerous for our world, especially given the burgeoning alliance between Iran and China. https://www.conservativewoman.co.uk/iran-not-covid-is-the-real-menace/ The book also describes how unvaccinated countries bring a new Covid-19 variant which kills President Joe Biden. This vaccine cheerleading is mildly irritating in otherwise a generally sound story. Murrin's astringent assessment of President Donald Trump is misguided, especially as Trump knew far better than his predecessor Obama, and his successor Biden, about the dangers of China in comparison to regimes like Russia. But Murrin does point out that Trump understood the CCP's dangerous threat to global freedom.

But these are minor quibbles. His depiction of the aftermath of Chinese global domination is most disturbing and should be heeded. 'Red Lightning' is fascinating and although the author describes it as a work of predictive fiction, most of it rings eerily true. More than anything Murrin's book is an urgent warning which needs to be read now, before it's too late.

It's not fiction but truth to state that China has played the long game, and thanks to the capitulation of depraved, venal Western leaders, they have won.

This is China's century now.