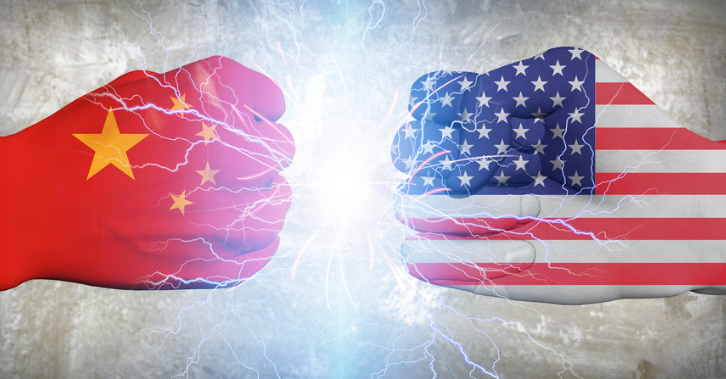 I don’t believe it would be this pandemic or climate change. Instead, I believe it to be the hegemonic challenge China poses to the West. Since 2004 I have argued this challenge would near its climax as the next commodity cycle peaked in 2026-2030. Consequently, over the past few weeks I have been focussing on raising awareness to the accelerating threat China represents to the West. If you have not read the following, I recommend you do so to place this article in context.

I am concerned that America’s failure to mount a strong enough resistance to the Chinese challenge could lead to war, much as failed deterrence arguably led to World War Two. Historically, mobilising democratic nations against the rise of authoritarian, expansive and militaristic powers has always come too late. The result of this late mobilisation in the First and Second World War’s is that these same democratic nations were almost overcome in the initial onslaught. In today's world of precision weaponry there will be no second chance to rally. Any conflict between advanced military power will likely be over in mere weeks. As such, nations must be prepared to deter any conflict from the outset.

I have often pondered why democracies are slow to react to imminent threats. My answer is that the aggressor almost always adopts a two-faced covert strategy. By this, I mean that the aggressor works to build strength and undermine the hegemon while professing friendship until they possess superiority and consequently pounce. During this period of proffered friendship, democracies want to believe the peaceful intentions are real; they are blind to malign intent.

Over the past 40 years China has been a master of this two-faced strategy. They have proffered friendship and the promise that they would join the other nations of the world in a rules-based society. Instead, they have had only another goal; to undermine the current global structure and replace it with their own Draconian authoritarianism.

The first step in countering a democracy’s complacency is to call out the challenger for who they are and what they are covertly executing. A democracy must shine a spotlight onto the actions of the aggressor. The letter from the US administration to the CCP yesterday, timed at the start of their annual conference, was a milestone in this regard. I have read it and believe it to be factually accurate in every way. It represents a warning to China that America has woken up and will do all it can to push back Chinese expansion. We can thank the Wuhan Virus for the acceleration of this polarisation which will likely lead to greater deterrence. I have included some key clips below, but I strongly suggest that you read the whole document.

Having called China out, it is now critical for America and its allies to act accordingly. By this I mean building strong alliances to contain China as well as matching or exceeding them in the arms race ahead. In the short term, this increasing polarisation will accelerate what I call ‘Phase 3’ of the global market decline. This started yesterday in the US markets and on May 1st in the European markets. The second iron curtain will fall on global trade which will only exacerbate the current economic collapse and  prolong recovery for years. Additionally, I would expect China to sell down its 18% US Bond Holdings in the months ahead.

Since the United States and the People’s Republic of China (PRC) established diplomatic relations in 1979, United States policy towards the PRC was largely premised on a hope that deepening engagement would spur fundamental economic and political opening in the PRC and lead to its emergence as a constructive and responsible global stakeholder, with a more open society. More than 40 years later, it has become evident that this approach underestimated the will of the Chinese Communist Party (CCP) to constrain the scope of economic and political reform in China. Over the past two decades, reforms have slowed, stalled, or reversed. The PRC’s rapid economic development and increased engagement with the world did not lead to convergence with the citizen-centric, free and open order as the United States had hoped. The CCP has chosen instead to exploit the free and open rules based order and attempt to reshape the international system in its favor. Beijing openly acknowledges that it seeks to transform the international order to align with CCP interests and ideology. The CCP’s expanding use of economic, political, and military power to compel acquiescence from nation-states harms vital American interests and undermines the sovereignty and dignity of countries and individuals around the world. This alludes to the intentional duplicity of the CCP present the image of aspiring to be part of the order of the Western rule whilst seeking to grow stronger and use that power to subvert and ultimately destroy it.

·         Guided by a return to principled realism, the United States is responding to the CCP’s direct challenge by acknowledging that we are in a strategic competition and protecting our interests appropriately.

·         Similarly, the United States does not and will not accommodate Beijing’s actions that weaken a free, open, and rules-based international order. We will continue to refute the CCP’s narrative that the United States is in a strategic retreat or will shirk our international security commitments. The United States will work with our robust network of allies and like-minded partners to resist attacks on our shared norms and values, within our own governance institutions, around the world, and in international organisations.

3.      China's duplicity (taking the American hand of friendship to use it against America)

·         The American people’s generous contributions to China’s development are a matter of historical record.

·         Beijing has repeatedly demonstrated that it does not offer compromises in response to American displays of goodwill, and that its actions are not constrained by its prior commitments to respect our interests. As such, the United States responds to the PRC’s actions rather than its stated commitments.

·         In matters of diplomacy, the United States responds appropriately to the CCP’s insincere or vague threats, and stands up alongside our allies and partners to resist coercion.

·         As part of our worldwide freedom of navigation operations program, the United States is pushing back on Beijing’s hegemonic assertions and excessive claims. The United States military will continue to exercise the right to navigate and operate wherever international law allows, including in the South China Sea.

·         We are speaking up for regional allies and partners, and providing security assistance to help them build capacity to withstand Beijing’s attempts to use its military, paramilitary, and law enforcement forces to coerce and prevail in disputes. In 2018, the United States military withdrew the invitation for the PLA to 14 participate in the biennial Rim of the Pacific exercise due to Beijing’s deployment of advanced missile systems onto manmade features in the South China Sea.

·         The United States will continue to maintain strong unofficial relations with Taiwan in accordance with our “One China” policy, based on the Taiwan Relations Act and the three United States-PRC Joint Communiques. The United States maintains that any resolution of cross-Strait differences must be peaceful and according to the will of the people on both sides, without resorting to threat or coercion. Beijing’s failure to honour its commitments under the communiques, as demonstrated by its massive military buildup, compels the United States to continue to assist the Taiwan military in maintaining credible self-defence, which deters aggression and helps to ensure peace and stability in the region.

·         United States officials, including those from the White House and the Departments of State, Defence, and Justice, are leading efforts to educate the American public about the PRC government’s exploitation of our free and open society to push a CCP agenda inimical to United States interests and values.

·         The Administration is raising awareness of and actively combatting Beijing’s co-optation and coercion of its own citizens and others in United States academic institutions, beyond traditional espionage and influence efforts.

·         The Administration is implementing the Foreign Investment Risk Review Modernization Act to update and strengthen the capacity of the Committee on Foreign Investment in the United States (CFIUS) to address growing national security concerns over foreign exploitation of investment structures, which previously fell outside CFIUS jurisdiction. This includes preventing Chinese companies from exploiting access to United States innovation through minority investments in order to modernize the Chinese military. The United States has updated its export control regulations, particularly in light of Beijing’s whole-of-society MCF strategy and its efforts to acquire advanced technologies related to hypersonics, quantum computing, artificial intelligence, biotechnology, and other emerging and foundational technologies. We are also engaging allies and partners to develop their own foreign investment screening mechanisms, and to update and implement export controls collaboratively through multilateral regimes and other forums.

·         The 2018 National Defence Strategy (NDS) prioritises long-term competition with China and emphasises modernization and partnerships to counter the PLA’s technological advancements, force development, and growing international presence and assertiveness. As described in the Nuclear Posture Review, the Administration is prioritising the modernization of the nuclear triad, including the development of supplementary capabilities designed to deter Beijing from using its weapons of mass destruction or conducting other strategic attacks.

·         The Department of Defence is moving quickly to deploy hypersonic platforms, increasing investments in cyber and space capabilities,

The Administration’s approach to the PRC reflects a fundamental reevaluation of how the United States understands and responds to the leaders of the world’s most populous country and second largest national economy. The United States recognises the long-term strategic competition between our two systems. Through a whole-of-government approach and guided by a return to principled realism, as articulated by the NSS, the United States Government will continue to protect American interests and advance American influence.

At the same time, we remain open to constructive, results-oriented engagement and cooperation from China where our interests align. We continue to engage with PRC leaders in a respectful yet clear-eyed manner, challenging Beijing to uphold its commitments.

Please read the full Article below.

US Strategic Approach To The Peoples Republic Of China

Brilliant article, everyone should read this

David Murrin has always been way ahead of other commentators on China. Pointless reading The Times, Telegraph or comedy Guardian to find out what's bearing down on the West. And it feels like China has the BBC in its pocket, lying by omission on a daily basis on just about all subject.