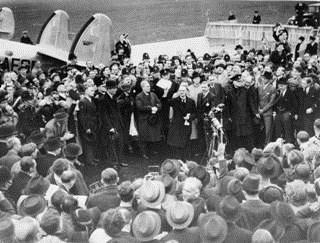 Throughout history individuals and nations have had to decide how to react when threatened by a strong aggressor. Appeasement has been an age-old human strategy which some have chosen to adopt in such situations, in the hope that, by agreeing and appeasing an aggressor they will buy themselves time, or perhaps even an exemption from any harm.

History has clearly demonstrated that, in the face of an expanding powerful  aggressor, such a strategy only delays the inevitable. British Prime Minister Neville Chamberlain is remembered for his infamous 'Peace in our time' statement on 30th September 1938 after returning from his negotiations with Hitler over the Munich Agreement. Despite this declaration of appeasement, the German occupation of the Sudetenland began the very next day and, less than a year after the 'agreement', Europe was plunged into World War II.

With such a historical national memory in the forefront of British history it is alarming that the question of appeasement has been recently raised within the British cabinet following waves of cyber espionage aimed at our island shores. The  debate is between the Prime Minister and the Chancellor who are desperate not to offend the Chinese so that they can attract their capital to stimulate the economy and Foreign secretary William Hague, who believes that Britain should not on any account bow to coercive behaviour by the Chinese.

So the question here is who is acting out the roles of Chamberlain and who is Churchill?