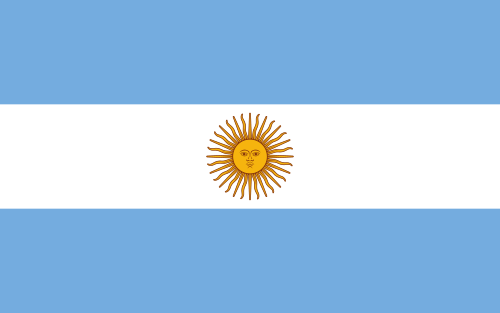 Argentina has a rich history which is closely linked to its European origins and one that defines its very nature. It was the Spanish who first came for the silver, but after independence from Spain was declared in 1816, when the Argentine flag was officially adopted by the rebels, the ensuing Argentine War of Independence attracted disenfranchised ex French Bonapartists and Italians whose influence dominated for a few decades. The course of the war seemed obvious and in 1825 Britain was the first country to recognise Argentine independence, after this struggle and the overall Spanish American Wars of Independence had ended in victory for the Independentist forces over the Royalists at the Battle of Ayacucho on 9 December 1824.

Subsequently it was the British influence that came to dominate Argentine culture during the Victorian Era, and Argentina became a destination of choice for the black sheep of wealthy English families, second and third sons who would not inherit their parents' wealth, and who had to forge their own paths in life. These English immigrants were not escaping poverty, but instead imported their wealth of agricultural and industrial knowledge, and capital, to help grow and shape a new country. In the process, Argentina became part of the informal British Empire, and acquired additional importance because of its vitally strategic location on the trade routes that entered the Pacific Ocean heading East. At its peak towards the end of the 19th century Argentina accounted for 10% of Britain’s total foreign investment. British influence in Argentina remained strong with 39% of foreign investment in Argentina in 1939 coming from Britain, until this was broken once and for all by the Peronist government in the 1940s.

The strength and depth of Argentina's European heritage has, over the years, seemed to set it apart from its Latin neighbours, but this may well be a national identity that is limiting its future development through its subconscious synchronous links to a parent empire that has long since been lost. Back in 1913, when the Super Western Christian Empire reached its high point, based on per capita income Argentina was the world's tenth wealthiest nation, a wealth derived from its vast and fertile agricultural lands. Since then it has relentlessly slipped down global national wealth tables. This process was initiated by the opening of the Panama Canal in 1914, as this diverted traffic away from its shores, and then accelerated by the start of the (peak war) First World War in 1914, when the global trade upon which the country was so dependant all but dried up. A third blow came as the cost of the war had all but bankrupted Britain by 1917 and significantly reduced Britain’s post war capital investment in Argentina.  This was not replaced by the United States, as it primarily viewed Argentina as a competitor in the world markets.

This triple shock to the Argentine economy provoked an inexorable decline. In the 1920s any attempt to follow Europe on a course of industrialisation was curtailed by a lack of oil and coal resources within the country. Then, in the 1930s, a decade of potential recovery was stalled by the great depression, and, these conditions of economic chaos and hardship led to a military coup ensued.  Within the five stages of empire model, this can be classified as a peak civil war within a regional cycle, that ended decades of successful democratic leadership and started the downturn in the quality of the nation's leadership that would accelerate a persistent and relatively relentless and prolonged economic decline.

However, such was the original wealth of the country at its peak that even twenty years ago Argentina was still the belle of the Latin American world, and its people continued to feel a sense of national pride and even superiority. Then in the late 1990s, at the trough of the 54 year commodity cycle, the reality of years of poor fiscal management came home to roost and the true predicament of Argentina’s financial crisis was exposed to the world. This was not a single event that was then rectified but one that has been rumbling on ever since through a crisis of Argentine identity. During this period Argentina has had to watch as its neighbour and greatest competitor Brazil rise to economic prominence in Latin America, in what is perceived nationally as a shocking  turn of events, and a major blow to the nation's self esteem.

According to the Five Stages of Empire model, Argentina can be seen as a colony that maintained the identity of the European parent empire from which it had gained apparent independence, as its  collective national psyche remained connected to its parent, which has been running in parallel, with the decline of the Super Western Christian Empire and Europe in particular. This paradigm is best observed through the manifestation of a sequence of misguided leaders, who have only exacerbated the country's consistent decline. Their isolationist and defensive positioning has been reflected in Argentina's exchange control policy which, instead of strengthening the nation’s economy as planned, is having the reverse effect of strangulating the nation’s economic wellbeing, and forcing the growth a currency black market that has the secondary effect of underlying the moral relationship between the individual and state.

There are countries that were colonies of European powers but which gained independence and then rejuvenated their nation identities to initiate new cycles independent of their parents. Australia is an excellent example, and in the second half of the 20th century, as British power and influence diminished, it was left isolated from her historic roots and must have felt very venerable for a time. Australia now finds itself in the economic sphere of influence of the emerging Asian powers. Helped by the commodities boom, Australia has integrated its economy with the rising Asian Super Empire and started a new regional cycle in its national development.

Since its independence Argentina has undergone one regional cycle, and is now potentially entering its second, like Australia. Argentina needs to let go of its sense of European superiority, apply the Australian model, and embrace the Latin revolution that is being led by Brazil. This starts by recognising and finding a good leader who is prepared and courageous enough to make the changes needed both internally, and externally. The first step must be to drop the exchange controls and allow the economic revolution of Latin America into Argentina, which, although initially painful, will provide the fire that precedes the rise of the phoenix. The shock of such an economic drop will be cushioned by the current rising commodity cycle with another 10-13 years to run, which will continue to support and increase a key sector of Argentine GDP.

As well as introducing internal economic reforms, Argentina needs to reinvent its relationship with other nations, and especially with Brazil, as Britain did with France at the start of the 20th century, to create strong new political and economic links with Brazil as quickly as possible that will firmly place the  Argentine national identity within the continent of Latin America and in step with Brazil.

As China's naval aspirations grow, the importance of Argentina and its proximity to Cape Horn may engender renewed interest from America in the importance of the country's strategic location. In addition, Argentina should reach out and export its agricultural prowess into Sub Saharan Africa, opening up new economic links to one of the fastest growing and most exciting regions of the world.

The good news is the combination of strong demographic trends within Argentina and an educated middle class providing the forces of rejuvenation and expansion that can be harnessed when a strong visionary leadership emerges.  However, for the time being, whilst the rising commodity cycle has caused a significant increase in GDP, none of that productivity has resulted in any sustainable economic benefit but has instead been squandered, thanks to the Kirchner government's protectionist policies. Its high taxation of agricultural exports and nationalisation coupled with high inflation levels have actively discouraged much needed foreign investment. In this context, one can only sympathise with the Argentinian population's growing  frustration with these destructive policies, and the misguided leadership that put them in place.

This Argentine crisis may only deepen as we approach the national elections in 2015; however it will be interesting to see if Argentina can produce the new, effective and courageous leadership it so acutely requires if it is to achieve a rebirth in the face of continuing decline.