We have been tracking the progression of the impending market Collapse and the Wuhan Virus. We are now at the point of impact when the effects of the virus touch everyone and the reality of the global economic crunch also hits home. Hence the title above, taken from the words of airline captains spoken to their crews and passengers just before impact with the ground.

One thing that I am certain about, is that the world that we have all known, will post this crisis will be a  very different indeed.Beause pandemics are massive entropy events that most impact both the weaker people and the weaker social systems that its attacks. Thus is based my theory, that the younger more vibrant systems like China are more energetic in both the way they fight the disease spread and bounce back from its effects.The example of building emergency hospitals and bringing in 32,000 medical staff into Wuhan, demonstrates this behaviour.

Whilst the older systems like America will be  slower to response effectively and I suspect will recover more slowly.The lack of CDC funding thanks to one of Trumps early decisions coupled with the lack of testing kits, is a good example of lack of preparedness.

However the biggest impact will be on both nations economies. With respect to their durability to the inevitable massive financial shock of the immanent market collapse.Coupled with the speed with which they will recover in the new polarised bifurcated spheres of influence that will be but one inevitable consequence of this criss. I suspect that China will gain considerable ground on America when the scores are analysed in a couple of years. This in turn will embolden China to make a potential military challenge to American hegemony by 2028.

But back to todays criss, as its important to face one at a time!

Why Do I Still Call It The Wuhan Virus?

In my book Breaking The Code of History, published in 2009, I predicted that the next great viral epidemic would originate from China. Sadly I was correct. This gift from China either:

Either way, the situation was compounded by the authoritarian states clamp down on news flow that was vital to contain the outbreak in its early stages. They have without doubt further compounded their guilt by lying about the number of infected people and the number of deaths. They did and continue to do this to appear to maintain an image of strength. In so doing they have lessened the impact of the Wuhan virus and the consequential warning signs that would have prevented its global spread and better prepared other nations to minimise their casualties. For all of the above reasons I feel that we should all be reminded of where this virus originated. When this horrible pandemic is over the world will need all its commitment and resources to resist what will inevitably be an accelerated Chinese march to hegemonic power within the decade ahead.

Why Should Everyone Be Worried?

This virus behaves like a biological weapon, in that it spreads for at least 14 days when the infected are asymptomatic. The conclusion is that it is unstoppable unless everyone stays isolated for 3 weeks. And the economy stops dead. As western nations are not like the Chinese with total authoritarian control, we can assume that we do not put such measures in place in time so that 60-70% of the population is infected within months. Whilst we were initially told that the death rate were not worse than flu, the evidence is that once the hospitals run out of ICU beds we will see, as in Wuhan, a 10% mortality rate and that is backed up by what is happing in Italy. Thus if we assume that 60% of the population of the world is infected, at a 10% mortality rate, the upper band of deaths could be a staggering 420 million. At a 90% infection rate we are looking at 630 million deaths before an effective vaccine can be deployed. If that was not enough to worry one, this is an RNA virus that is able to mutate into new strains, two of which are now infecting people simultaneously. The larger the effective pool of people the higher the probability of new strains, some of which could be even more deadly.

Is China Getting Back To Work?

The one thing that we know about China is that it never tells the truth! So I doubt that China is recovering. With a population of 1.2 Bn and only 81,000 people (a number I greatly doubt!) infected, the moment they go back to work the next wave of infections will take hold. So I suspect that China is locked into the infection rate versus economic growth paradox, which will continue to limit economic output both in china and across the world to the most limited essentials that keep an economy just ticking over. The only way to resolve this paradox is either the whole population is exposed and develops immunity, or when an effective vaccine is deployed. The latter is at least 12-months away if not longer; the former might be a reality before then with the Wuhan's ability to find new hosts.

The Rate of the Spread of the Virus

The absence of testing and the nature of the virus and its ability to transmit itself means that the viruses has spread through the worlds societies already. The pandemic is upon us. Why am i so convinced it simple the spread curves are basic mathematics proven in S Korea and Italy and thus the scale of this crisis is inevitable.t.

What has happened to Italy is about to happen to every European nation. In the UK some estimated 10,000 are infected and are walking around spreading the Wuhan virus. Every European nation will have a similar situation. Other nations including the Uk will move to lock down faster than Italy's timeline. The same will happen in America but the magnitude of the levels of panic will be far greater as the national psychology is such the American homeland has never seen such a powerful threat to its population's well being. New York will soon go into shutdown. This will be a very significant point in the crisis as New York is the financial centre of America. At that point, the US Markets will realise the magnitude of the global pandemic and the last and most powerful stage of the meltdown will be underway. 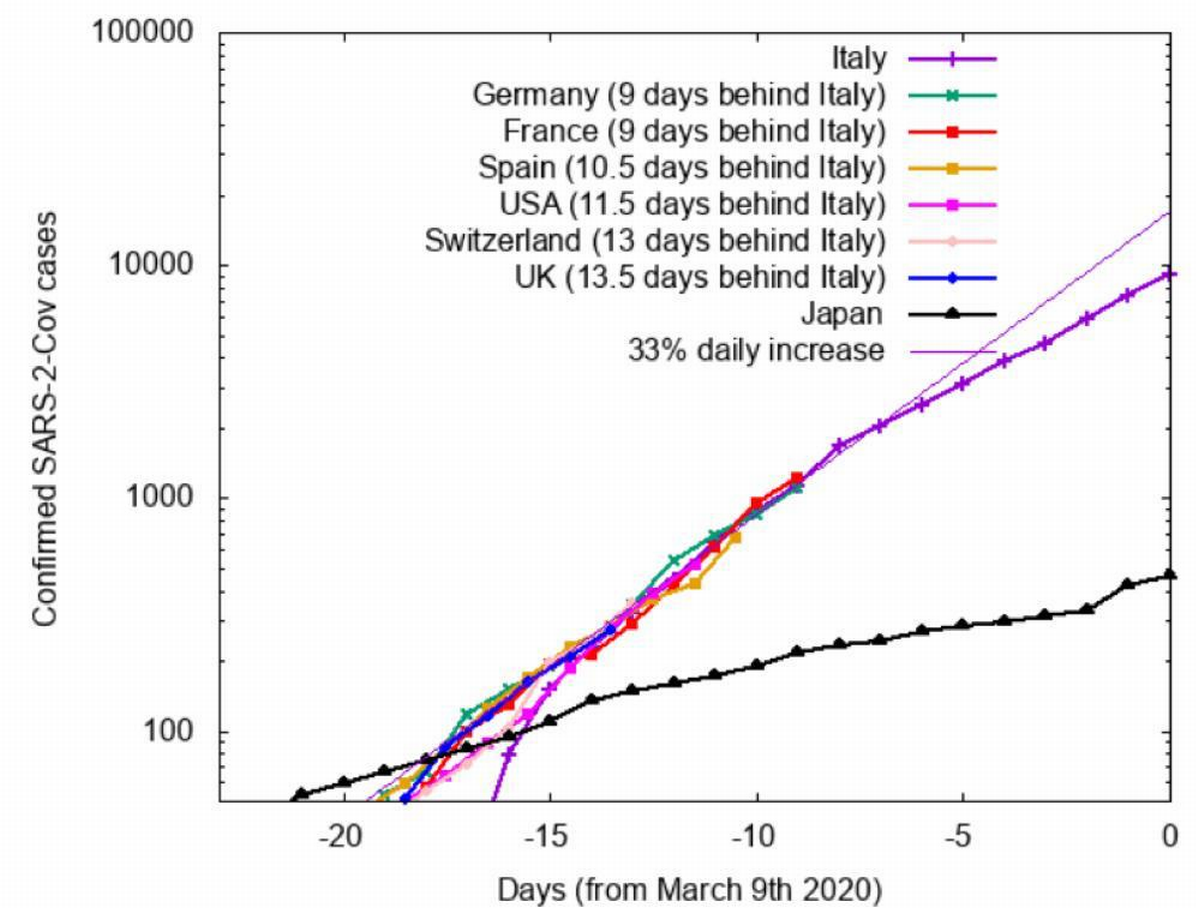 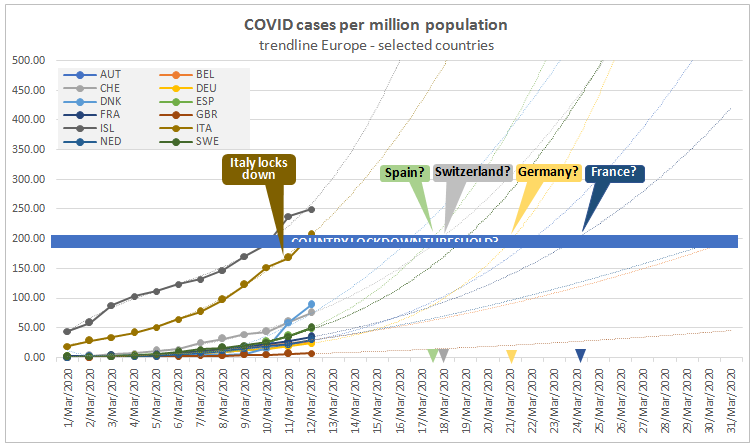 Will Government Fiscal Stimulus Save the Day,

In a word, on a relative basis yes; but on an absolute basis no. I would expect the UK government, with its wealth creation/wealth distribution policies, to be the most effective Western Nation in this regard and thus for sterling to strengthen. However, there is no chance that such measures will mitigate the economic damage ahead.

The Wuhan virus has in our opinion removed any chance of Trump's re-election chances. Although Biden is in the lead position, the immediate impact of the Wuhan virus on America in the weeks ahead will propel Saunders's wealth distribution policies into a potentially winning position. Whoever wins the Democratic nomination will be the next president of America.. Reports of New Jersey Hospitals filling with infected patients who then cannot be saved are now reality. https://www.thesun.co.uk/news/11147867/coronavirus-patients-die-hours-no-symptoms/

A Time of Global Revolution

The impact of the simultaneous shock of the global economic standstill and the Wuhan virus will cause extreme social distress in all nations across the globe. We expect civil unrest and revolution to change the geopolitical landscape and will be highlighting them as they unfold.

We are 18 trading days from the highs with their delusional perspective on the global economy. Today the global equity markets are down some 17% on average with Italy Leading the charge down from 25 500 to 18 000 as of now which is a 30% decline. In that regard, Italy has conformed to our expectations that it would be the weakest stock market representing a nation threading its final path to default. The BTPs confirm this forecast, having dropped from their high when all other G7 bonds markets have been rallying to new highs.

All our market views and their associated trades are in play and we are running them all as per our market Analysis Recommendations (If you are an Asset Manager and wish to subscribe contact David). In summary, the patterns we have seen in the markets will both continue and accelerate. For those of you the wrong way around and still long equities this pause in the price decline is your last chance to bail out as the move is only 1/3 complete and the next 30 to 50% drop will be a complete wipe out. To be clear, there is no hope of any government intervention that will prevent this now inevitable route. The reality is that most people cannot compute the magnitude of the disaster we are about to experience, so they choose to shift into denial.

The Scale of Denial

The level of the denial in the markets is unbelievable considering the magnitude of the viral tidal that is about to engulf us all. If people had not digested the impact on China and the Wuhan Region they should wake up at the impact on Italy and realise that we are all going to be hit and devastated by the Wuhan Virus. And if you still think the Coronavirus story is hype and over juiced by the media, read some of the stories coming out of Italian hospitals suddenly swamped by patients’ urgently needed ventilation and intervention because they can’t breathe and their internal organs are going into toxic shock. Italian Hospitals short of beds as coronavirus death toll jumps. This isn’t anything like the flu. For the 20% of patients who get it bad... they are getting it very bad indeed. Another good read is Coronavirus: Why You Must Act Now.

The Symptoms of Denial

So if any part of these phases resonate with your thought processes, I would respectfully point out that you should appreciate that you are in denial (as most now are).