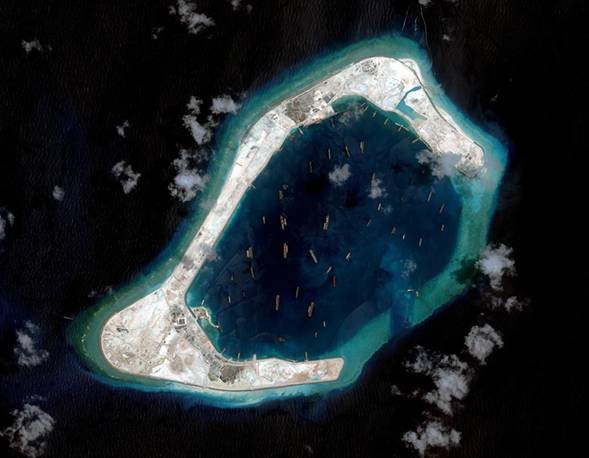 There is always a time when the intentions of an individual or that of a nation shift from the hidden to uncloaked. That is the point where the wise prepare for action. We have for over a decade warned of the rise of China and that its challenge to the world would ultimately not be a peaceful one, as so vehemently claimed by President Xi. Consequently, we have been following the construction of islands in the Spratly chain, based on the partially submerged reefs that lay below the high tide mark, all of which under UNCLOS (The United Nations Convention on the Law of the Sea) were considered not to be sovereign territory. However, the recent pictures released by the BBC, clearly demonstrate Chinese territorial ambitions and their desire to expand their influence across the South China Sea. Judging by the impressive magnitude of these transformations, the Chinese vision will no doubt be a series of deep water naval and air bases from which they can project military power across the surrounding seas and especially to some of the exits from those seas. The evidence speaks for itself as shown by the pictures below.

If there was ever any denial as to the Chinese objectives towards expansion, these pictures should now quell any doubt. Under UNCLOS any plane or ship should have the freedom to travel through/around these islands and yet the Chinese Navy insists on an exclusion zone.

Both the US Navy and now an Australian plane have challenged this exclusion zone successfully. However, one has to wonder for how long this zone will be free to planes and ships that seek to force free passage, especially when they are fully operational as military bases and can lock their weapons systems on to intruders.

It seems that the Chinese calculation in the construction of these island fortifications has been based on the current weak pushback from the Obama administration. Thus, one should expect that by the time of the next US election in eleven months, these islands will become Chinese property in a fait accompli. After all, it is doubtful that the US Navy would start a war to remove these bases.

One just has to wonder and worry, what or where will be the next Chinese target of acquisition, once these islands are considered as Chinese territory. The concern is that, having come up with a successful island acquisition strategy, what will stop the Chinese from repeating this process in other locations to extend their string of pearls?

Mischief Reef before the Chinese arrived.

Mischief Reef after the Chinese arrived.