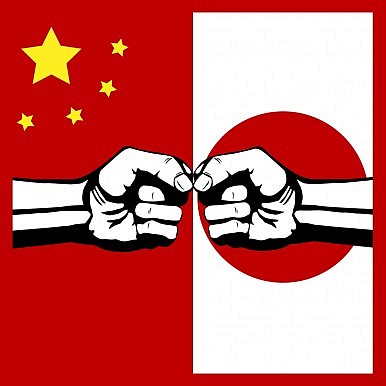 So how could Japan attempt to defuse the primary polarisation effects from China caused by their past actions? One of the key focuses for recent Chinese anger has been the visits by three of Prime Minister Shinzo Abe’s Cabinet ministers to Yasukuni Shrine, a national Japanese Shinto shrine that houses the souls as ‘Kami ‘ of the dead who served the Emperor during wars from 1867 to 1951. Enshrinement under the Shinto faith typically carries absolution of earthly deeds, which is relevant as there are 2,466,532 people contained in the shrine's Book of Souls, of which 1,068 were convicted of war crimes by a post World War II court. Of those, 14 are convicted Class A war criminals ("crime against peace") as found by the war crimes tribunals or IMTFE (International Military Tribunal for the Far East) that comprised the victors of World War II.

It should be said that there has been considerable doubt about the method of information collection used by the IMTFE, the so called "Best Evidence Rule" that allowed simple hearsay with no secondary support to be entered against the accused. As a consequence, the court could well have enacted an invalid form of victor’s justice due to the significant procedural flaws which gave many Japanese people a reason to believe that the convicted were not war criminals. Nevertheless, there can be no doubt that by Western standards Japanese atrocities were prolific during the period of hostilities and that as a nation their armed services manifested many more than 1,068 war criminals. As comment aside, I am sure that the Allies would have had their fair share too, as would have the Chinese Forces.

Irrespective of the validity of the convictions, with only 0.04% of the souls in the shrine being convicted war criminals, the Chinese propaganda machine has been hard at work using the visits of the Japanese cabinet ministers as an example of unapologetic behaviour. Indeed visiting officials do so as individuals rather than as officials, due to the formal separation of the State from the Shinto religion.

So what could Japan do to reduce Chinese anger? Firstly, to make an official apology for Japanese actions during the war with China. The second might be to find a way to separate the souls of the convicted war criminals from the remainder. However, as they without doubt believed that they were serving the emperor through their actions this might be very hard to ask for the Japanese culture to accept. More importantly, it will be viewed as weakness by the Chinese at a deep level and only encourage them further to find another polarisation process to catalyse their population against Japan.

Sadly however, from the extensive study of the five stages of empire (i.e. phase of expansion to empire), such polarisation dynamics are always driven by the expanding and aggressive nation who is looking for an excuse to justify their national agenda of expansion and needs to polarise its people to serve the collective cause. Thus sadly, I am of the opinion that China’s march on the road to war is almost unstoppable, and even if the contentious topic of visits to the Yasukuni Shrine were to be resolved, another one would be found to substitute the Chinese purpose. In response, we can expect a secondary defensive polarisation from Japan which is but a natural reaction to the primary polarisation from China. Notably, the process will only abate when the impulsive primary polarisation process stops, which currently seems unlikely.

Excellent points, yes the Chinese probably would find other gripes and yes, they probably would read it as weakness. Still, if I was Japanese I'd make a very big effort to apologise 'for our fathers terrible mistakes, just don't blame us, their children'. No doubt the madness will continue.