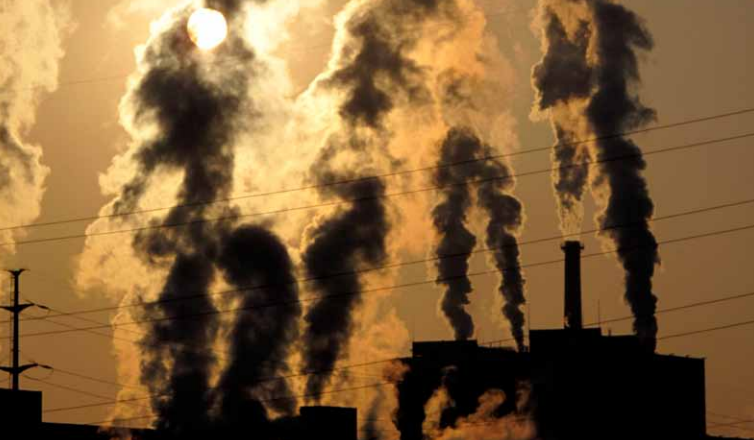 Climate change has not occurred at some arbitrary point, but at a specific phase in our human history - as two industrial super empires co-exist. On the one hand, the US, the last offspring of the WCSE, which peaked in 1990 and has since been in decline. On the other hand, the rise of China as the second empire of the Super Asian Empire as the industrial power house of the world. Meanwhile, the accelerating change to the Earth’s climate will continue to present an urgent and dramatic challenge and can only exacerbate any existing social, political and resource stress, consequently lowering the threshold risk for global conflict.

The Response of the Super Western Christian Empire

The response of the developed nations of the WCSE to the problem of climate change, has been shaped by the psychology typical of decline and overextension, in which it has become an ever-increasing challenge to maintain the high standard of living that the developed nations have come to expect and demand of their politicians. This being the case, the diversion of public resources to counter climate change, and the consequent reduction in lifestyle and choice that would be required on an individual level, have until only recently, met with substantial resistance. This resistance has been compounded by a western society set in its ways and unable to adapt effectively to new challenges, the interest of a declining empire being the maintenance of the status quo. In addition, the decline in creativity of a waning empire that is predominantly lead by iterative left-brain thinking has further limited its range of responses, new problems have been met with denial and incremental solutions. An excellent example would be the CEOs of large oil companies with their established political architecture, who are thus most likely to be run by left-brained iterative thinkers, who are thought followers, who just focus on the narrow road ahead of their company's future. With powerful lobbying capabilities, they have sought to dampen their government’s recognition and response to climate change to everyone's detriment. This mindset needs to change urgently. This contrasts strongly with the company's whose CEO's are founders and thus by nature are right-brained and who see their company within a world context. Consequently they are most likely to support climate change mitigation as thought leaders.

America as the dominant Hegemonic power with a mountain of debt holding up its pillars of power, is clearly in decline and as such faces immediate threats from rising empires such as China and these take precedence over future, less apparently tangible dangers. Thus America has been slow to respond to the threat of climate change, by adopting a state of denial and continues to be heavily reliant on oil. Trump's denial of climate change is less a delusion and more strategic imperative combined with the hope that the effects of climate change are further away on the timeline than the threat of China to America. The one exception within America has been the forward-thinking state of California which leads the world in the development of an effective carbon credit scheme.

Meanwhile the EU has been more proactive. Being in legacy and reformation, and therefore not as overstretched as the US, it has been one of the most responsive territories to the dangers of climate change and the protocols of Kyoto and Copenhagen. However, whilst recognising the threat the ineffective leadership in Europe and moribund economy, has failed to see or commit to measures that would have any meaningful impact. 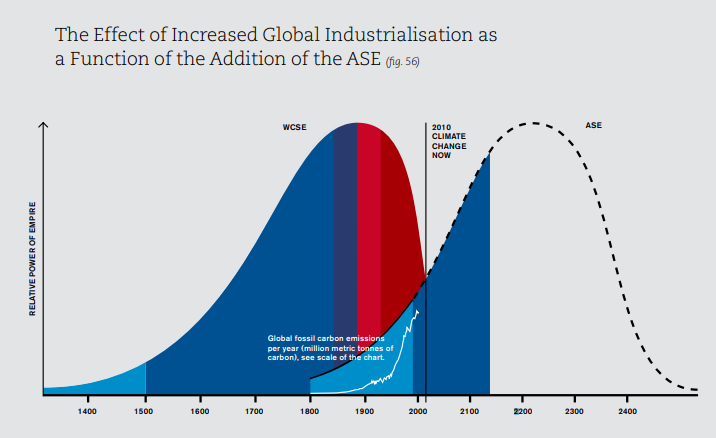 The one exception is Britain, who has declared a climate emergency. Initially I dismissed this as a political stunt by the Labour Party. But upon reflection it is interesting to note that having argued that Britain is the only western nation in an expansionary mode (as we struggle through the final stages of its civil war) forward thinking on climate change is symptomatic of a general aspiration and positiveness within Britain at this stage of the cycle. The other notable example is Japan that imports all its hydrocarbons and is thus open to finding new and better ways of being less carbon dependent, and of course it lacks an oil lobby to inhibit that process!

The Response of the Emerging Nations

In contrast, the emerging nations in regionalisation, such as Africa, India, Latin America and the Middle East, and those in ascension to empire, such as China, are expanding demographically and industrially. As has been posited, these nations have a single goal: to expand and emulate the standard of living of the developed world. As yet, the poverty of the majority of the emerging nations means that the day-to-day challenges of existence override the concerns of climate change. However, it is these nations, currently building new modern infrastructures, that could theoretically be capable of integrating green technologies into their growing economies, if the cost differential were compensated for by the developed nations. Without such support, the emerging nations are unlikely to opt for cleaner energy, justifying their CO2 emissions by accusing the developed world of creating the problem in the first place. The net effect is a great deal of talk but no action of the magnitude that is urgently needed to address the current changes to the climate.

The US has the highest per-capita emissions rate in the world. China comes in at only 40 percent lower, but, because its massive population which is more than three times the size of the US, its total emissions levels are very close to its Western counterpart. The predominance of coal-fired power stations in China exacerbates the situation. Both nations are locked in strategic completion that has overridden any concerns from the future of the world they seek to control. Alarmingly since 2000 the worlds energy use has increased by 50% in just 20 years, a trend that will continue to accelerate compounding the climate change problem.

Whilst the two most powerful nations have locked horns, across the rest of the world there is the daunting problem that there are just too many people living on our planet in a non sustainable way. All understandably seeking the benefits of industrialisation and parity with western living standards. So how do we as a race stop our carbon emissions and start to reverse the damage we have caused? Carbon allowances would need to take into account population growth as well as industrialisation rates; population controls would thus become an integral part of climate-change policy. Reconciliation must take place between developed countries with flat demographics and benefiting from a high standard of living (from having long been industrialised), and which have already generated massive amounts of climate-changing carbon, and the world’s emerging countries with swelling demographics, which are now following the cheapest and most polluting paths to industrialisation. Key to this discussion is the pollution rate per capita, which is highest in the West and lowest in the developing world. By the time the latter is approaching the same level of industrialisation as the West, per capita the Earth will have quickly and inevitably passed the 5°C raised-temperature point, and then the biosphere will exact its own severe penalties on human civilisation.

The US and China are essential to resolving the problem. The US, throughout the 2000s, missed a historic opportunity to use the twilight years of American power to channel wealth into climate-change policies, thereby modifying the way China and India grew their industrial power bases. Now, overextended and economically turbulent, the US is less able than ever to divert resources to helping the rest of the world to develop clean technologies; it does not even have the resources to lead by example by effecting such changes in its own economy. China may come to determine that climate change is a drag on the global economy, but, owing to the momentum behind its own growth, it may also consider that it will be able to counter climate change as its empire expands. Yet the effects of climate change on China may become more devastating and at a faster rate than the country can mitigate through expansion.

Locked in a Deadly Loop

Climate change is a function of the empire cycles, as we have seen, with the ASE rising to supplant the WCSE as it declines. There is simply no room on the planet for both industrial super-empires to coexist in their current manifestations.

So we seem locked in a deadly loop, With the world’s two great industrialised states still competing with each other, the much needed solutions will be delayed or prevented. Which in turn will only exacerbate the resource competition feeding back into the cycle. Until the most powerful countries truly understand that they and their children will suffer the effects of climate change, the ingrained collective behaviour that has governed humanity for so long will continue pushing us towards disaster, making it unlikely that we will change in time.

However turning the climate problem on it head, if America and China were to determine that climate change was a bigger threat than each other, then mans greatest challenge could become the agent of our change in the way we relate and cooperate globally. We shall examine this possibility in detail in the part 2 The Tipping Point of Reality.