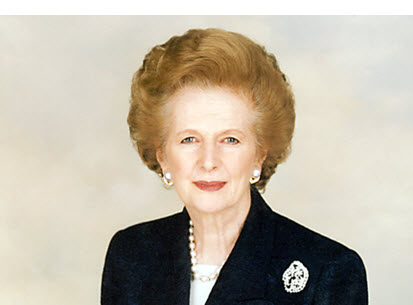 One of the premises of “Breaking the Code of History” is that the very nature of the leaders and heroes that a nation produces is dependent on where that nation is on the curve of the five stages of empire. These leaders come in the many forms of political, military, spiritual, and peoples heroes, and is no surprise that one of Britain’s greatest Prime Ministers in the 21stcentury was the political hero Margaret Thatcher. She was the first Prime Minister with a modern science degree as an educational base. The evidenced based approach to problem solving.

To understand Prime Minister Thatcher’s role, one must be reminded that Britain once ruled the greatest empire in mankind’s history, within the context of a much larger super western Christian empire. However by the end of the Suez crisis that empire had dissolved in a release of its components, which left the island of Britain impoverished and traumatised. Most importantly, consistent with a declining cycle of an empire, the collective value system was dominated by the belief that the state would look after its population in the form of socialism. This social value was amply demonstrated in the power of the trade unions that had a stranglehold over British industry.

Enter Prime Minister Thatcher, at the low point of Britain’s fortunes. Intuitively she recognized that Britain needed to rebuild herself in a new form, and to do that she had to break the unions that epitomized the old socialist values that were holding back growth. It was clear to Prime Minister Thatcher that the old staple businesses that had once supported the nation and that were uneconomical had to die to encourage a new economic paradigm. She understood that empires and nations are not built by the collective, but rather by entrepreneurial individuals who needed to be encouraged and rewarded for their risk and endeavours. It was through this process that Britain started to grow once more, and the pride in a nation was regained by its people. It would not be an exaggeration to say that Mrs T saved and reformed Britain from the empire doldrums.

There is no doubt that Mrs T’s style of leadership could be politely described as tending towards one of a benevolent dictator, with an unshakable belief that she was right and everyone else was less right, or frankly wrong, and  that they could be made to see the error of their ways! But make no mistake at a time of such crisis where the majority of the nation had lost its way, only just such a leadership style would have been successful. Historically, in crisis nations turn to a powerful style of leadership, but once out of the crisis into calmer waters the nation then seeks a more consensual style of leadership. This was the fate of Churchill after 1945, and a fate that befell Mrs Thatcher, who instead of adjusting her style as the social environment changed she exaggerated her style into a third term, failing to be sensitive to the changes in social mood. The result was a huge divergence from the nation’s social values as manifested by her cabinet and party, with the result that she was ejected from office unceremoniously.

The Cold War and the Falklands

Mrs T understood that the link between Europe and America was at times tenuous, and ensured through a very special relationship with Ronald Reagan that the Anglo Saxon relationship bound America to Europe through NATO ensuring that the alliance stayed strong, when at times it might have otherwise faltered. However, at the same time she understood that the British character of fierce independence was not consistent with that of Continental Europe and so she was circumspect with regard to the unification of Europe, with good cause if the current economic and political plight of the European experiment is to be judged!

The level of greatness as a leader that can be attached to Mrs Thatcher extends far beyond the shores of the island nation. Britain was a major European member of NATO that at the start of the 1980s faced the largest army the world had ever seen in the form of the Warsaw Pact led from the Kremlin. At the time it was only the threatened first use of nuclear weapons that held back the communist hordes from invading Europe and the prevalent belief in the Kremlin was that Western capitalism was weak and would fail to make the tough decisions at the critical moment, and so the thought of invasion was one foremost in Warsaw Pact planner’s minds.

Then Argentina invaded the Falklands and the world changed. First, Britain’s determination in response said to the world, ‘We may have lost our empire but we will defend our sovereignty with all our might’. Secondly, as I described in Breaking the Code of History, wars are considered to be of many types and significance. One particular war is termed a pilot war. This is a conflict that seems small and possibly without broader impact but one that tests the intentions and capabilities of the combatants of which one of which is a major power or in this case key to a greater alliance.   The Falklands determination shown by Britain and Mrs. T shocked the Kremlin as it demonstrated that capitalists were not weak and that there was no doubt that if forced, Britain would use all means, including nuclear weapons, to defend its territory and allies. At a stroke any plans the Warsaw Pact had to invade Europe went on the back burner, and most significantly as in the years to come when the system collapsed economically, it was never tempted to turn the cold war hot, in one last desperate throw of the dice. It is quite possible that Mrs. T not only saved Britain and the Falklands but the world as her childhood hero Churchill has done before her.

The new balance of male and female in British society

The commencement of the start of any new long term national or empire cycles will always usher in new social values with which a society can rebuild itself in a revised form. One of Britain’s new core values was that Thatcher by her actions led the movement of integrating women into the working culture of the nation on an increasingly equal footing. She was able to achieve this because the male machismo energy that had built and then lost an empire had lost its way and the leading politicians were generally weak of character compared to their illustrious predecessors. This presented an opportunity for her bold female and at times feral energy. Indeed she famously summed up this perspective by describing those around her (usually the majority) that were not decisive and bold as simply ‘wet’. However what really makes her stand out as a social trend setter was that she not only operated in a man’s world, but was better at it than those around her. Yet whilst showing male charteristsics in some situations Mrs T was certainly was not scared of using her female charms to ensure the outcomes she championed. Most of all she openly espoused the valued the concept of a long term enduring relationship with her husband Denis who although he was always happy to stand in the shadows no doubt gave Mrs. Thatcher the support and strength to fight and win so many impossible battles.

There is much discussion about Lady Thatcher’s Legacy. In terms of the cycle of nations and empires she represented the leader at the fulcrum point that defined the end of one British cycle and the commencement of the next one. Her policies changed the direction of a nation and propelled Great Britain back into prosperity and onto the world stage. Her immediate legacy was continued by John Major. This legacy further brought about the birth of “New Labour” and the Blair years. Whilst Blair espoused polices that could have been conservative, his chancellor under the cloak of claiming to be a frugal Scotsman took the massive national financial war chest inherited from the Thatcher years and proceeded to squander it though big government misspending and mismanagement. This created the retracement to the Thatcher growth impulse that has continued with the current coalition Government.

Lady Thatcher was a conviction politician, in contrast, the current government which is lead and staffed by PR/PC politicians who are the very opposite to Thatcher, much as they are desperate to be associated with her image. Whilst the Labour Party cringes under the responsibility for Britain’s current woes, the Conservative Party have wandered far from the Thatcher path and are also discredited with their Liberal Democrat alliance. The result is a disenchanted electorate and rudderless nation with little respect for any of the main political parties. Lady Thatcher’s greatest legacy may yet prove to be the UKIP party, who espouse many of her values. Just as happened in Canada when the established Conservative and Liberal parties lost electoral credibility leading the way for the Reform Party, there is every chance that UKIP will arise from being a populist protest party to become the dominant majority party in the next elections. Indeed, even in death Lady Thatcher could prove the nations spot light as the reviews of her policies, and recognition of the nation’s debit to her, forces the electorate to focus on the need for effective and bold  leadership at a time of national crisis.