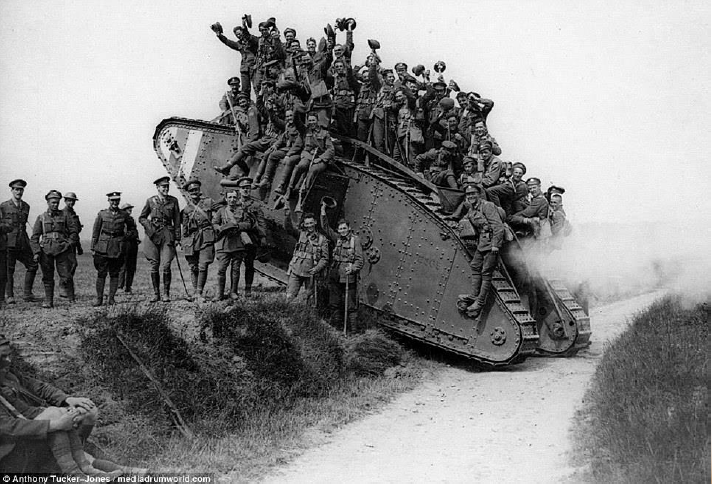 Winston Churchill once said about history, ‘The longer you can look back, the farther you can look forward’. As we approach the centenary of the end of World War I (WWI), perhaps it is time to ask questions about whether we really understand why such a destructive war, which blighted a generation, took place, and more importantly, how it was won. And out of respect for those that gave their lives and for the benefit of future generations, we must ask the key question: Have we learned the necessary lessons to avoid it ever happening again?

To answer these questions, we must have a good grasp of how history truly unfolded. However, the resounding perception today in Britain is that it was a war in which ‘lions were led by donkeys’, a historical phrase revived by then Prime Minister David Lloyd George and firmly attached to WWI in his memoirs, as well as being perpetuated since by Captain P A Thompson’s Lions Led By Donkeys: Showing How Victory in the Great War was Achieved by Those who Made the Fewest Mistakes in 1927 and Alan Clark’s The Donkeys in 1961, and epitomised by the wonderfully humorous 1989 BBC television series Blackadder Goes Forth.[1] Conversely, in Germany, the post-war perception was that it was politicians who had let the German nation down, and not its generals, despite the country having a higher casualty rate than Britain and having lost the war.

Of all the wars that took place in the industrial age, WWI had the greatest divergence between reality and its current understanding. This is best illustrated by the fact that General Douglas Haig, who commanded the British Expeditionary Force (BEF) from 1915 to the war’s end, was extremely popular with his soldiers and the British population after the war. Suggesting that he hardly represented the leadership of a donkey. The truth is that the BEF generals were disdained and became the focus of a divisive style of leadership by Lloyd George. The result was that the BEF generals, and Haig in particular, were besmirched in the pursuit of political advancement by the very politicians who left Britain so inadequately prepared for the war’s outbreak.

The war was to take on four distinct phases, in each of which the BEF played a critical role:

But if one battle encapsulates the real story of the BEF during WWI, it is the Battle of Amiens, which began on 8 August 1918 and lasted only four days. The suffering of the 1,501 days that had come before had been harnessed into critical lessons that turned the tide of the war against Germany on the Western Front, and from 12 August until the end of the war, and Germany’s surrender, the Allies experienced only victories.

In fact, only the brilliance and determination of the BEF’s leadership and the resilience of the Tommy saved Britain and Europe from subjugation by Germany. This book redresses the misperception surrounding the assessment that it was a war in which lions were led by donkeys.

Most importantly, there are key lessons embedded in Lions Led by Lions for today’s politicians, the most important of which was that Britain collectively demonstrated a clear national intent throughout the decade before the war’s outbreak to maintain Pax Britannica against the German challenge. At the critical moment in 1914, British politicians projected conflicting signals as to the certainty of their support of France and Belgium such that they failed to deter the Kaiser from his invasion.

Figure 1: A poster demonstrates the national energy and determination that Britain manifested to fend off the German naval challenge. The question is, why was this not matched by plans for a reserve army of the same order as France and Germany? (Image: Mary Evans Picture Library)

The size and capability of the British Army had failed to keep pace with those of the continental armies, making it seem like an insignificant element in the balance of power and thus an ineffective deterrent to German ambitions. However, equally significant was the influence of liberal politicians such as Lloyd George and the signals they gave to Germany about Britain’s lack of will and intent to stand by France in her impending hour of need. This left the Kaiser and his advisors with the idea that the world’s greatest empire was ripe for challenge. Notably, and of great relevance, is the misperception dictatorial leadership has of liberal politics at critical times in history that has led to the outbreak of wars. In a world where Russia and China are both ruled by dictators, the free world must re-learn key historical lessons about political messaging between systems with two different collective emotional languages.

Today Britain is not an empire, but it is still one of the key regional powers in Europe and potentially the pivotal element in the continent’s resolve to defend itself against aggression. The greatest of those threats is China’s global aspiration to replace US power, a challenge that will take all of America’s resolve and resources to rebut. Britain and Europe cannot therefore rely on the full support of America under stress in fending off a resurgent Russia, who is most certainly the challenging regional power.

In the run-up to 1914, Britain demonstrated a clear national resolve in its naval defence spending that made its homeland unassailable, even if its overseas capability to project power had been neglected. Alarmingly, Britain’s politicians today fall into the category of left and central, so at best (in the Conservative Party) they espouse the very liberal politics that led to the horror of WWI. In short, our national will is negligible, and as such is already inviting aggression from a belligerent Russia. In terms of capability, every aspect of Britain’s sea, land and air defences have been denuded of investment for decades and are now woeful to the point of negligence.

With such a national disaster looming large, it is time, on the one hundredth anniversary of the end of WWI, to learn the lessons as to how and why the worst war in man’s history started, and to remember that with continually developing modern high-intensity weapons Britain will not have time to recover from its lack of preparedness if attacked. The memory of our fallen should be honoured by applying those key lessons learned from the events that led to their sacrifice to save current generations from an impending danger of the greatest magnitude: our nation’s very survival.

This extract was taken from Davids new book Lions Led by Lions A New Understanding of the British Expeditionary Force in World War I- To be published in December 1918 via this website.