Coronavirus And The Disease Cycle of Empires Part 2 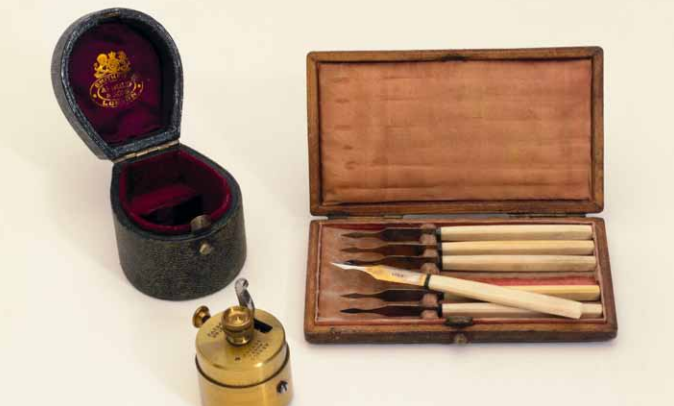 A smallpox vaccination kit from the nineteenth-century, containing small blades used to pierce the patient’s skin. Edward Jenner (1749–1823), a country doctor, developed the inoculation against the killer disease. 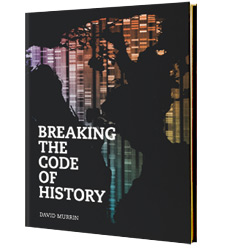 This post is the second instalment of chapter nine from Breaking the Code of History, which I am sharing with you, split over a number of days. If you haven't already please check out the first instalment and then come back here:

At a point when the world is watching at event that will go down in history, this chapter will help you understand how diseases have affected previous empires and how it could effect the Chinese empire of today.

Diseases of Expansion of Empire - Part 1

Historically, the coherence of organisation that accompanies the growth of an empire, with improved utilities and methods of disease control, has mitigated the effects of disease on a population. This may be further enhanced by the strengthening of the collective immune system as individuals gain a sense of control and pride in their achievements that feeds into a positive cycle. However, the strength of a collective immune system varies with advances and setbacks in the society of which it is part. In periods of stress, epidemics take hold, starting with localised outbreaks that then gain a foothold in the general population. In addition to periodic outbreaks of opportunistic diseases, there are continual struggles throughout the empire cycle against endemic diseases, such as malaria and typhus.

Diseases of Contraction of Empire

Conversely, as an empire goes into decline, and its social and economic structure disintegrates, the collective immune system of the population is weakened by the stress of holding together a failing system, coupled with decaying public utilities. This allows disease vectors to take hold. Increased social stress facilitates an acceleration of the process of decline (on both an individual and a societal level), allowing disease to take hold and ravage the population. The decline of an empire is a not a linear process; instead it displays periods of apparent stability followed by accelerated deterioration. It is the latter period that is most likely to be associated with collective immune-system suppression directly linked to stress, with consequential epidemics.

A key example of a disease of contraction of empire was the Plague of Justinian. This started in ad 541 at the peak of the Byzantine Empire’s power, and it lasted for over a century. Named after Emperor Justinian, who caught and survived the disease, it was to change the fate of his empire. Although at the start of the outbreak the Byzantine Empire seemed intact, it had in fact been put under massive social stress by the power shift following the fall of Rome and the massive military campaigns aimed at securing the beleaguered empire’s borders against the Goths and Vandals. It was not surprising then that the population of Constantinople succumbed to the plague and that, at its height, 5,000 to 10,000 people a day perished.

The plague, which is believed to have originated in Egypt, followed the grain trade routes north to Constantinople then spread across the whole of the Eastern Roman Empire. During the height of its devastation in ad 541–542, it resulted in the death of one quarter of the Mediterranean population.

The plague impacted on the very future of the Byzantine Empire. Just before it struck, Justinian was about to embark on a campaign to restore most of the original Roman Empire, including Rome itself. However, not only was this venture aborted but, under the burden of a significantly reduced population, the empire continued to be prey to the expansion of the Goths. Indeed, so devastating was the effect of the disease on the population of the Byzantine Empire that it is not merely speculative to suggest that, even a century later, it played a significant role in the successful expansion of the Islamic Empire of the first caliphate into its territory. 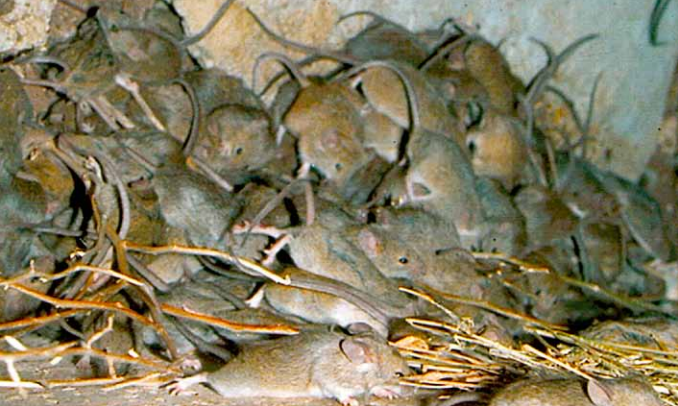 Mice swarm during an Australian epidemic. These rodents live for up to two years. Females can start reproducing at six to eight weeks old and can have between five and ten young in each litter (gestation is three weeks). One female can thus produce more than a hundred offspring a year.

Man has become the ultimate predator on Earth, vulnerable only to disease. As a result, a key question for the future is whether medical advances will keep pace with the war against disease or whether new forms of, at least initially, drug- or control-resistant disease will reduce the human population. There are a number of animal populations that exemplify the cycle of growth of population and disease, unmodified by medical intervention, and that can inform us about what this process might be like.

Foremost among these are the mouse plagues of Australia. Every few years, a number of factors conspire to create the perfect conditions for an explosion in the mouse population. First, there must be above-average rainfall to produce a plentiful food supply with an overlap of successful Summer and Winter crops.

Once these conditions exist, the prolific breeding capability of the mouse is triggered. Mice can breed at any time of the year, and can lactate while pregnant, decreasing the time between litters. Combined with a gestation period of eighteen to twenty-one days, litter sizes of four to eight and a sexual maturity of only five to six weeks, this enables the mouse population to grow at a staggering rate over very short time frames.

Each mouse consumes some 2–3 g of food per day, so that 200 mice eat as much as a sheep (200 kg consumption per year). Up to 1,400 mice per hectare have been recorded, and the huge numbers that appear at the time of these plagues can devastate a farmer’s crops, festooning their barns and homes with a moving carpet of mice. The scale of these epidemics is astonishing. For example, one morning a farmer who had baited with poison had to sweep 28,000 dead mice off his veranda, and one town recorded 544 tonnes of poisoned mice in five months.

To all intents and purposes, the mice are contained in a closed system, and their population growth is naturally limited by their source of food running out. Consequently, most plagues end in July as food becomes scarce and the weather cold, increasing the level of social stress. These factors, combined with the high population density of the mice, facilitate the rapid spread of disease. As the competition for food increases, the behaviour of the mice changes and they become more aggressive. Fights break out, resulting in mortalities and vicious wounds, which are easily infected, thereby further accelerating the spread of disease. Within two days to two weeks, the population crashes. These plagues are periodic, ebbing and flowing, constrained in their population cycle, as has been said, by existing in a relatively closed system.

Another example of the cycle of growth and disease is the Norwegian lemming – a rodent no more than 8 cm long that inhabits the Arctic tundra. The lemming population also periodically goes through rapid expansions. However, they have evolved a strategy to escape the limitations of their closed system: when the population density reaches an unsustainable level, they embark on a mass migration. Their prodigious swimming ability means that they fearlessly take to the oceans in search of new territory despite the majority perishing in the process. The staggering size of these lemming migrations is illustrated by the anecdote of a pre-war steamer in a Norwegian fjord, ploughing through a shoal of lemmings for a quarter of an hour.

The lessons of these rodent plagues for mankind are clear. First, there is a series of factors – climatic and social – that allow a population to grow to the sustainable limits of its environment. This expansion takes place despite any endemic disease processes. The population reaches its peak at the point at which the resources to sustain it run out. Social stress and hunger quickly set in, and disease soon takes its toll as the collective immune system declines, and so the destruction of the population unfolds at an alarming rate.

Historically, man has dealt with such environmental stresses by migration. Indeed, this has been the demographic driver for ascension to empire. This strategy has worked in the past because there have been new areas with lower populations to move into. However, with increasing demographics, this option will no longer be viable without provoking conflict. Thus the closed-system fate of the mice rather than the expansive strategy of the lemmings is likely to be the destiny for huge swathes of the population of the Earth faced with depleting resources, climatic change and disease.

Disease Cycles of the WCSE

The WCSE provides an excellent example of the trajectory of population and disease through the cycle of empire. To understand the larger patterns at work within the cycle, this chapter is restricted to the major diseases that have had a significant effect on the population of the WCSE, broken down into diseases of the expansive stage of empire, diseases of its maturity and those of its contraction. These three stages further divide into endemic and opportunistic diseases. 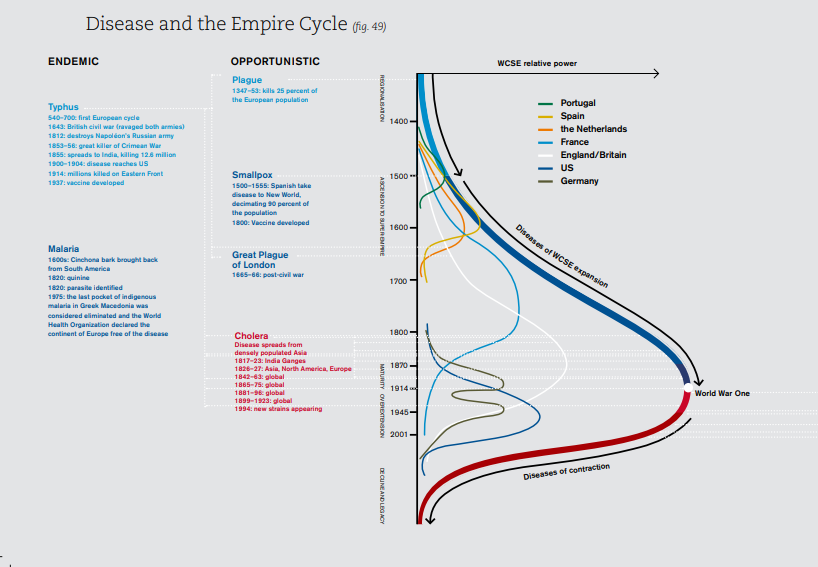 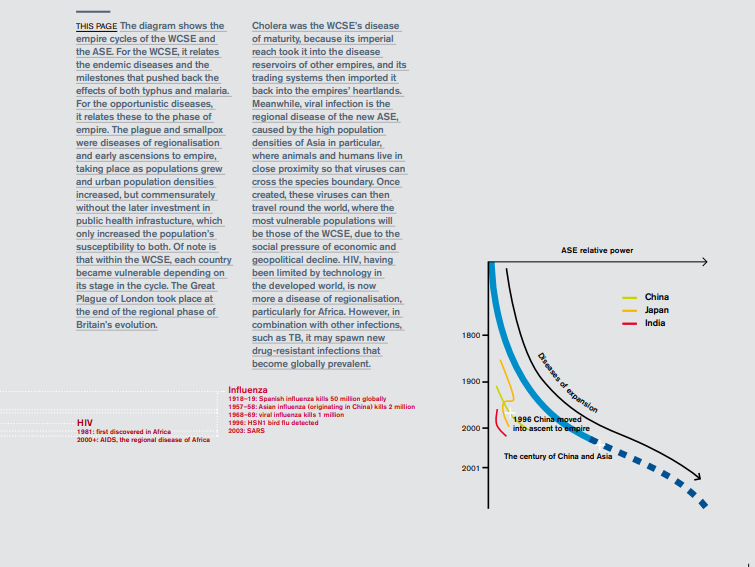 Part 3 Diseases of Contraction of Empire - Part 1, follows tomorrow. Subscribe now to receive this direct to your inbox.

Breaking The Code Of History 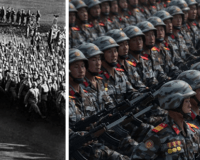 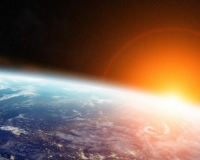 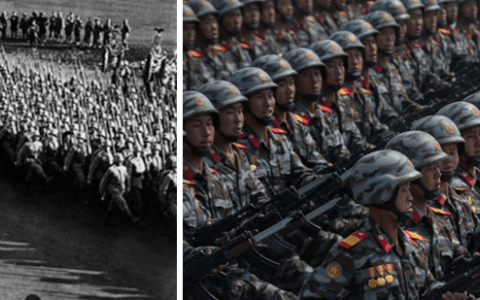