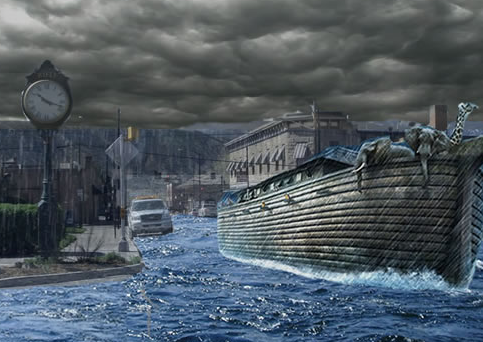 Although the last couple of weeks might have seemed relatively quiet in the financial markets, I believe the scene has been set for interesting times ahead, as our Phase 3 scenario begins to coalesce and volatility increases dramatically.

To summarise, the dollar’s weakness has been building up a head of steam. Ten year bonds in America, the UK and Germany have all broken upwards in price, on their way to a last negative yield rally, that reflects the economic malaise ahead. Whilst gold and silver are about to break higher as a safe haven/store of value, as for the first time in decades, it will be cheaper to hold than a bond with negative carry.

Meanwhile, the US tech equity markets, with their few star performing companies, have made their highs of the Phase 2 irregular rally and are now rolling over, with just about everyone fully invested in this sector. Although this sector has benefited from the lock down process, they will inevitably be impacted by the real shrinkage of the US economy.

Simultaneously, the weaker stock markets like the SP500, Dow Jones and European stocks, all peaked on the 9th/10th June and have been coiling in a series of moves, where the highs and lows become progressively lower. This suggests a  major break to the downside that will be seen in the weeks ahead. Similarly, I expect oil and commodities to follow equities down to new lows on the year in Phase 3.

As for the reason as to why stock markets should turn lower, one must be reminded that the five crises of American decline are all in play and any one of them may spring from nowhere.

1.      The Crisis of Leadership: Trump now, Biden later. Honestly, neither can be considered as capable. As per our prediction from January 2020, that Trump would not be re-elected, the poles are now showing that Trump is miles  behind Biden. This is a gap that I expect will increase in the months ahead. At some stage, the equity markets will wake up to this  inevitable transfer of power to a democrats, with socialist tendencies, that will not favour the dollar, bond and stock markets in the future.

2.      The Crisis of the Pandemic: The current first wave is about to accelerate. I believe we will have secondary and tertiary waves to follow. Notably, I expect the acceleration of pandemic numbers in the US to be significant. This will inevitably force a second lock down in many of the worst hit states, which will in turn carry major economic impacts. One of the inevitable consequences will be a wave of state defaults and bankruptcies that will, as the numbers increase, shine the light on over leveraged Federal finances.

3.      The Economic Crisis soon to manifest into a Market Crisis: We are facing a 1929 style depression, but worse, that is currently masked by the stock market resilience driven by Government money printing. This has created the perception of the Fed Put, making investments an apparent dead certainty. As a result, everyone is max long. Only a few smart investors are boldly short. The longs in my view, are now the walking dead. Notably, the risks of a stock market crash are high, as delusion and reality meet.

4.      The Crisis of American Social Unrest: This is an expression of increasing poverty and desperation. This will only increase in intensity as the poverty factor increases in the month’s ahead.

5.      The Accelerated Hegemonic Challenge by China: Chinese aggression has been breathtaking. It is time for America and Trump to push back, which could create a major crisis. Here Comes Americas Pushback Thus the polarisation will inevitably become increasingly aggressive in the months ahead, as Xi believes that America is unable or unwilling to push back.

Below is a Chart of Dow Jones Industrial Index and our analysis that we are now in phase three, following phases 1, the initial drop, and phase 2, the correction, which was extended by government intervention. 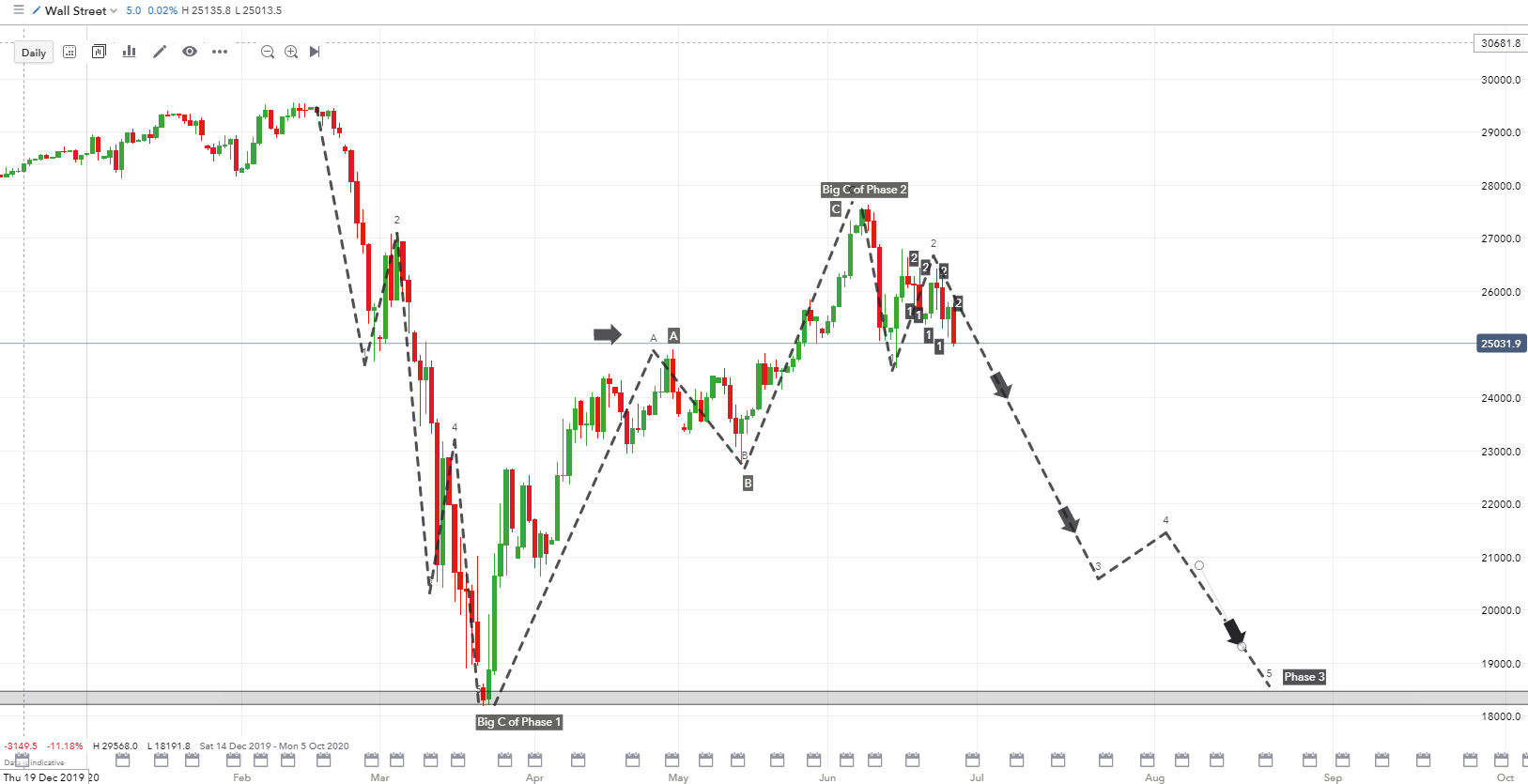 Below is a Chart of the FTSE 100 which is much weaker than the DJI (as shown by the strength of it bounce). Shown is  our analysis that we are now in phase three, following phases 1, the initial drop, and phase 2, the correction, which was extended by government intervention. 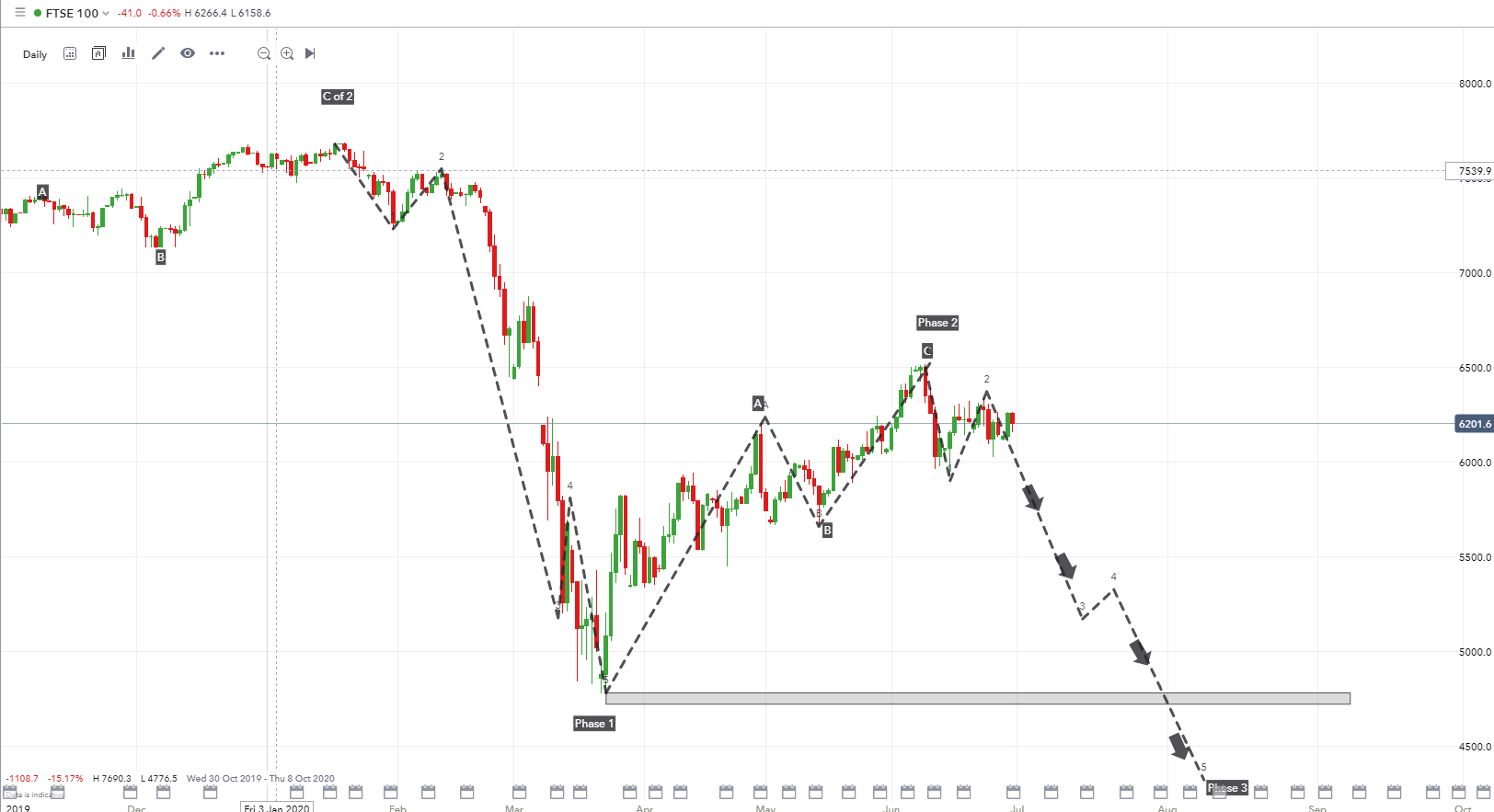