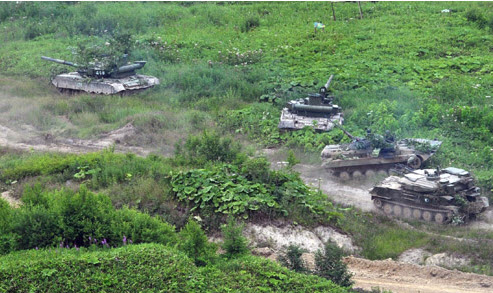 Putin’s vision of rebuilding the USSR is one he holds very strongly and one that he has worked hard to craft since his arrival in power. His campaign has accelerated and  he has been immensely successful in the past year taking advantage of Obama’s weak presidency and  foreign policy. Syria is a clear case in point which emboldened Putin to muscle Ukraine away from Europe into his arms. That overt step however backfired rather badly, with the second orange revolution forcing the pro-Russian ousted President Viktor Yanukovych out of office into hiding in Russia, as a fugitive from his people. So what now?

Importantly, this is Putin’s first failure in a long run of successes and we should not expect him to lie down and play dead.  This is why Russia continues to claim that Yanukovych is the rightful leader of Ukraine. The world should be on full alert as the large scale military exercises on Ukraine’s border are a clear statement that Putin is planning a riposte, that like Georgia will have a military component. Strategically Ukraine is not a member of Europe or NATO. Even if it were part of NATO, just like Poland before in 1939, the US and European force structures would not be able to prevent such a military intervention.  An invasion would create a certain outcome for Putin, that the world and especially Obama would huff and puff about, but nothing in the end could be done to reverse the outcome.

From Putin’s perspective he wants Ukraine back within his pride. However, If he cannot see a way to achieve his primary objective, then the second option is to help the Crimea militarily and become an independent state allied to Russia. The peninsula is of vital strategic importance to the control of the Black Sea and is 75% populated by ethnic Russians (after some previous cultural engineering). Thus, there is no way, knowing Putin’s character, that he  will be prepared to lose Russian influence in this region.

Whilst Russian reassurances today appear to rule out military action, I believe that with Putin in charge they should not be taken at face value, and that the West should expect the unexpected.