In Part 1, Global Hegemony Requires Shipbuilding To Create a Dominant Navy I raised the alarm that global navel hegemony is dependant on shipbuilding capability and that China has overtaken America by a significant margin. However, the significance of this shift has been outlined in a report by the National Defence Industrial Association (NDIA) in America.

The US currently builds some 10 warships per year. In an emergency, this could be doubled to 20 per year, with a full industrial mobilisation. This includes major repairs from combat damage. Thus, in a naval war in the Western Pacific, if the Chinese could sink more than 10 ships per year, the US Navy would contract. The key weapons that the US navy fears the most, are the ballistic anti-ship missiles, the DF-21 and DF-26 (with a range of 3000KM Plus), of which there are many hundreds. It is estimated that a barrage of 50 missiles could saturate the defensive screen and kill a single US carrier. Then there are the mass of long-range anti-ship, sea-skimming missiles, deployed from on ships and first island chain bases, that will soon to be upgraded to hypersonic weapons, posing a very significant threat. Lastly, there are the 70 PLN submarines, where although the majority are conventionally powered, when lying dead in the water they are extremely hard to detect. As the USS Kitty Hawk found out when one surfaced in 2006, well within strike range only five miles away from the carrier group. Thus it is safe to say, that the USN would, without doubt, suffer losses in the opening stages of an engagement that would exceed its shipbuilding capability. Although the US mothball fleet could, to some degree, fill the losses, the longer the struggle, the worse a position the US Navy would find itself.

Whilst the US Navy would no doubt inflict a severe toll on the PLN, the Chinese shipbuilding capability is based on over 50 yards, compared to 14 in America today. This has major implications for a sustained conflict that would favour the PLN. With today's high-intensity weapons, an attritional war is unlikely. Rather we would more likely see a short but highly intense conflict, followed by a period of recovery that with differential build rates could shift the balance of power in the PLN favour.

However, more immediately, as the arms race takes off in the weeks and months ahead, the Chinese will seek to out build America.  Today, both fleets roughly number 300 ships, but the PLNs average ship size is much lower, a characteristic that better distributes lethality across platforms, rather than concentrates it. The US ships carry some 12,000 missiles, compared to the PLN with 5,200 missiles. In the next seven years, it is not difficult to see the PLN expanding by 50% to 450 ships.

Of course, the allies of America: Japan, South Korea, Europe, Australia and India, all have shipbuilding capability that could be engaged in a ship building race, to balance the equation, especially if a strong alliance existed to contain Chinese aggression. Meanwhile, in this rapidly evolving world the British strategic defence review of the Royal Navy, needs to recognise that it is completely outmoded, much like the story of HMS Hood pre 1939. It lacks numbers and has no anti-ballistic capability, which means it cannot operate independently of the USN, when facing China. Whilst its so-called strike carriers are in reality very large escort carriers, because the F35B, does not have the range to attack land targets, without the carriers coming into harms way, from new long-range surface to surface missiles.

With the regional balance of power shifting in favour of the PLN, at least out to and beyond the first island chain, it explains why Xi has been so confident in his aggressive expansive behaviours over the past months. The conclusion from the current trends are that unless the West steps up to the challenge and matches, Xi's arms race and counters his expansive actions we are on a clear road to a very grave regional if not global conflict this decade. 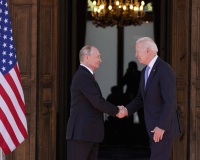 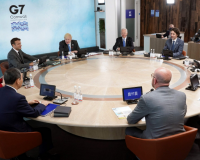