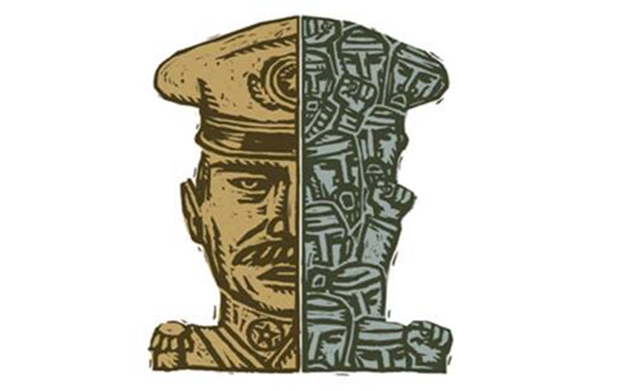 The organisation of human social structures has traditionally been hierarchical. This behaviour extends back to the time of tribal chiefs, kings and emperors. All were seated at the top of a pyramid with ultimate power, much as a queen controls an ant colony. The major departure from this organisational pattern was the introduction of democracy, with its much broader power structure and higher levels of collective enfranchisement within a society. For this new system to be successful it required greater levels of individual responsibility that, I would argue, were initially associated with a nation’s relationship with the sea. As I have asserted before, those that took to the sea were separated from the body of society and had to take individual responsibility for their actions. Then as ships became larger with larger crews, the interdependence upon each other for survival gave responsibility and value to crew members, which on land would have not have happened to the same degree.

The introduction of this relatively new form of leadership and social structure of collective empowerment (vs hierarchical control) has naturally led to competition between the two systems and their fundamentally opposing ideologies. Looking through history and especially as the world has become more globalised, there are clear oscillations between these leadership mechanisms. For example, at the height of the Super Western Christian Empire (SWCE), democracy came of age and spread across the globe. The SWCE reached its peak just before the start of WW1 in 1914. It was Germany with its imperial style (hierarchical) of leadership that started the war to challenge for global power and subsequently, lost. Post WW1, democracy seemed to have re-established itself, until the 1930s when we saw the rise of the dictators in the form of Stalin, Hitler, Mussolini and ultimately Mao. Again, it was the hierarchical nations that precipitated WW2 in their challenge to the world order.

By the end of WW2, the world has truly bifurcated with the democracies of the West on one side of the Iron Curtain and the USSR with its modified but still hierarchical leadership on the other side. Then the Cold War ended and it appeared that democracy would prevail and be the most common mode of human leadership on the planet. But just when the outcome seemed certain, the pendulum has swung back once more.

Today, we have in China President Xi who has become as powerful as Mao. In Russia, Putin presides over his nation like an emperor and now in Turkey, Erdogan has followed a similar path. It is clear that this genre of hierarchical leadership is once more expanding its influence and will inevitably seek to challenge democracy for control of the globe. So what would be the expected response from the Western world facing such a challenge? Well, Britain has already made a dramatic shift with Brexit, which has facilitated May as a strong leader in charge of the nation. However, Europe, I am afraid to say, is a lost continent, until collapse will bring about rejuvenation. However, the swing element to whether democracy will be overcome by dictatorship rests in the upcoming American elections.

Whilst I wrote a long time ago that Trump would be the next president driven by internal social drivers, we now add to that argument the external drivers that come from the threat of this global trend towards dictatorship. With the precipitous loss of American power during two terms of Obama’s leadership, there is but one overriding need of America as a social system. That is the immune response of “make me great again” that Trump represents. As a consequence, he will inevitably be the next president. His persona is one of strength. America as a collective group knows that with weak leadership, such as Clinton’s, it will certainly fall. Even, if America doubts the quality of Trump, and there are many reasons to do so, America unconsciously and consciously needs the strongest leader it can find to have any chance of success in the world ahead. As such the US elections in November will not just affect the USA but may well decide the future of mankind.

Sadly, the world has already entered a phase in history where the two ideologies will once more stand toe to toe in a process that will decide which ideology will dominate human affairs. The best we can hope for is a an impasse and a degree of balance as per the Cold War, the worst is unthinkable.

The weakness of Western leadership, particularly in Europe, is staggering. The EU has been an exercise in faulty group think for 40 years but only ONE man really confronted it, Nigel Farage, and he's near as dammit destroyed it. All the Left leaning/scrounging parties loved it, made them feel important whilst stuffing their pockets and pensions. Two thirds of the Tories believed in it, a third didn't but were too wet to do anything about it. Islam is now a massive threat to the West but again, our feeble politicians can't even bring themselves to talk about it. Trump looks like he might play hardball but who in Britain or Europe is talking tough? Not one of the 'mainstream' elected politicians. Democracy seems to produce weaklings. We need some LEADERSHIP!