How To Lose An Arms Race 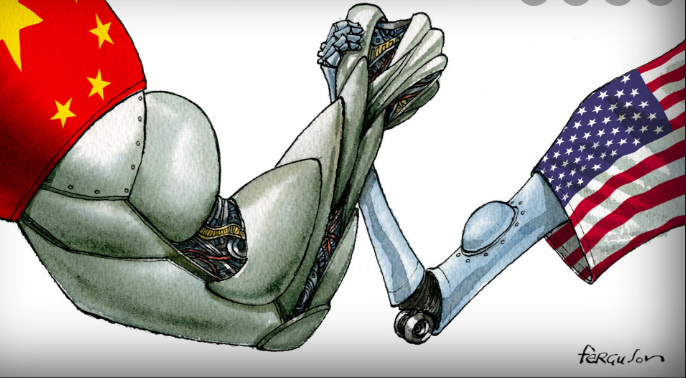 Answer: For America and the UK to keep following their current defence strategy.

1.0 Innovation and the Empire Cycle

One of the first conclusions that we were able to share on CNBC back in 2002 based on our revolutionary Five Stages of Empire Model, was that America had commenced its fifth stage of decline on 9/11. This while China, in 1996, moved into the second stage of ascension to Empire, a dynamic that would result in their hegemonic challenge to America and the West accompanied by an inevitable arms race.

Many at the time laughed off my predictions saying that the Chinese could only copy the West, never out-innovate it! To which I replied that the hallmark of the shift from regionalisation which is the first stage of empire, to the second stage was a shift from copy and assimilate to out-innovate. With more patents being registered in China than anywhere else in that world in 2019, our prediction has come to pass.

International Patent applications by country and China’s progression to the top.

However, there was a second part to that prediction which is now alarmingly also manifesting. That is that hegemonic arms races are won by a combination of innovation that creates revolutions in military affairs and consequent power imbalances that then favour the hegemonic challenger. The second component is that once the innovation has been developed that it can be manufactured on mass. With China’s world-beating manufacturing base, this capability is an absolute given. Thus, this arms race will be decided by the innovation race.

This is a race that America and the West are currently losing based on the hubristic assumption of politicians that the construct of current war-fighting technology that they used to win the Cold War would continue to dominate the battlefield. Whilst there has no doubt been considerable innovation in Western Armed Forces, it has followed an iterative process rather than one that seeks a quantum step in advantage. This is the conundrum of all hegemonic powers that in effect sit in a castle on the high ground waiting to be attacked, whilst confidently believing that they are invulnerable. Meanwhile, the challenging power seeks new technologies that invalidate the hegemony’s advantage and through vast energy and determination find weakness and then seek to exploit them. It is then up to the hegemony to match the war-fighting innovation with a similar energy, to close that weakness with effective countermeasures, or else face defeat.

Putin has used his relatively limited budget to create a wave of military innovations; especially at the strategic level that ensures that its nuclear deterrent remains highly effective. With new, powerful long-range land and sea-launched ballistic missiles coming into service, along with the innovative Poseidon nuclear drones that are able to carry a nuclear warhead underwater for 10,000km into an enemy harbour negating ABM defences, that wave of innovation has extended into more-capable submarines, surface ships and tanks. Specifically, hypersonic missiles give Russian warships a MASSIVE advantage over Western adversaries.

Hypersonic weapons such as Russia's 3M22 Zircon fly so fast and low – at speeds of up to Mach 6 and at a low atmospheric-ballistic trajectory – that they can penetrate traditional anti-missile defence systems.

The missile flies with an advanced fuel that the Russians say gives it a 1,000km range. And it's so fast that the air pressure in front of the weapon forms a plasma cloud as it moves, absorbing radio waves and making it practically invisible to active radar systems.

U.S. Aegis missile interceptor systems require 8–10 seconds of reaction time to intercept incoming attacks. In those 8–10 seconds, the Russian Zircon missiles will already have travelled 20 kilometres, and the interceptor missiles do not fly fast enough to catch up.

What is concerning is that Russia is not in a phase of ascension to empire, but rather in a more neutral cycle. But it has been able to out-innovate the West and that is a signal that the Western innovation process has been very limited and moribund. Not only exposing it to Russian innovation but to a wave of highly energetic Chinese revolutions in military affairs. 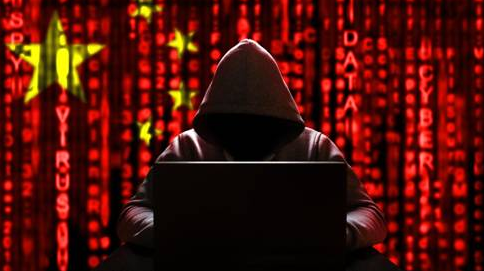 Today, America and the West are losing the arms race and the innovation race to create revolutions in military affairs with China. This should not be a surprise to any astute follower of the PLAN’s innovations. The key progression of this trend has been as follows:

This sequence of PLAN advances demonstrates a clear pattern of innovation. Notably these are the ones we are aware of, but inevitably there will be programmes that we do not have any knowledge of and they are potentially the ones that we should be even more concerned about. 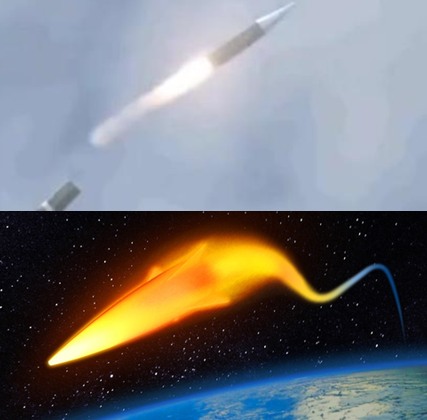 An image of a PLAN missile that launched the recent long-range hypersonic glide weapon. 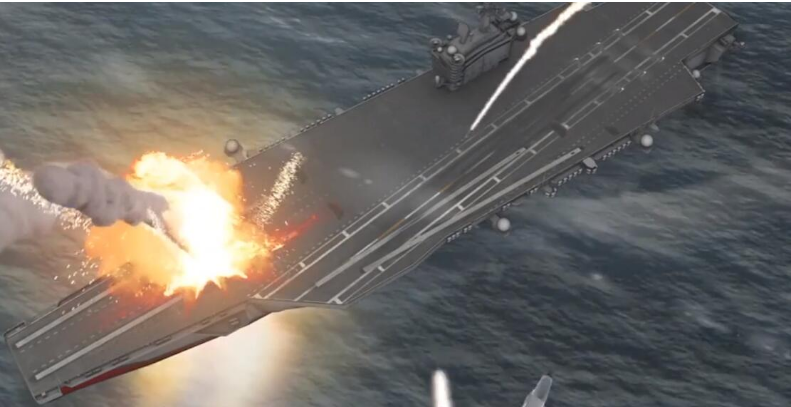 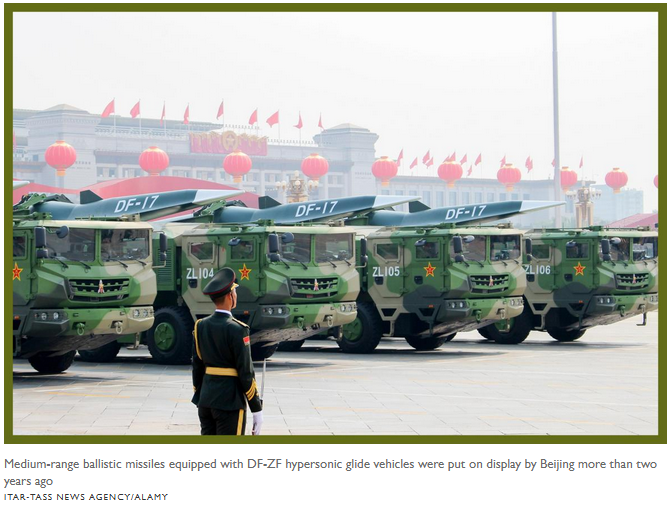 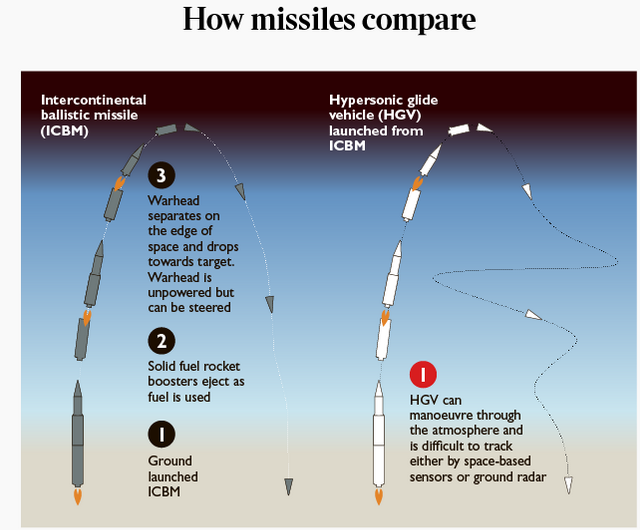 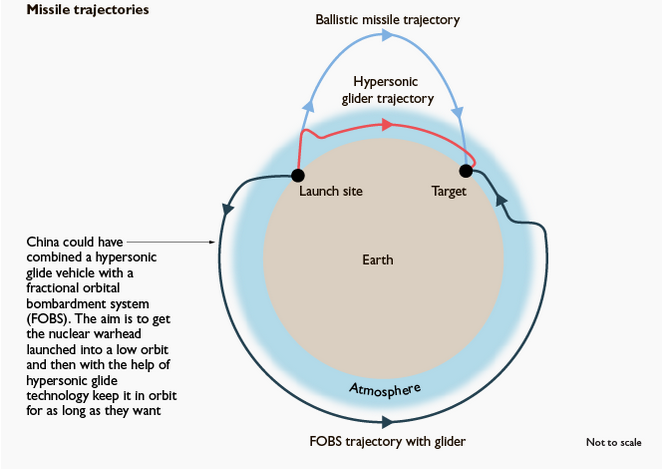 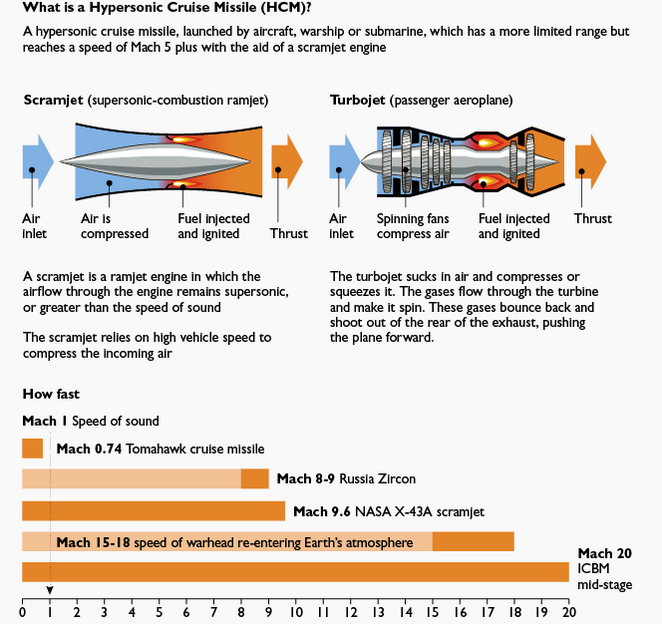 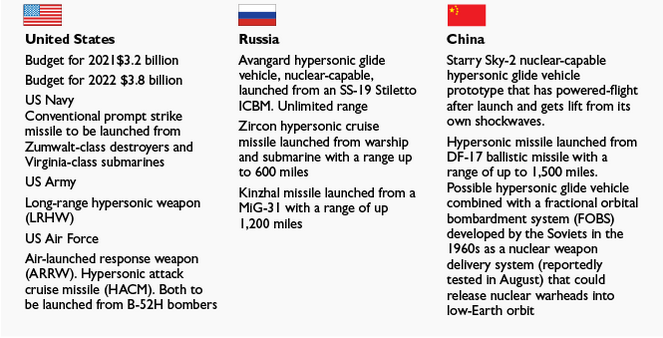 5.0 Expressions of America Surprise To the PLAN Test.

It is the response of the pentagon to Sunday’s announcement of the successful test of a PLAN ultra-long-range glide weapon that says it all.

Such statements of surprise suggest that the Pentagon realises that it is way behind the innovation curve with China. Unless Biden and Johnson wake up to the danger and fully mobilise America and Britain to face the danger we are in, as Kennedy once did against the USSR, China will win this arms race and then uses its weapons in earnest on the West.

We will be reviewing the potential of the US and UK Defence sector for investment in an upcoming article in our Long Short Scenarios.

23 10 2021 Hypersonic warfare: how China is edging ahead in the race for the fastest missile.