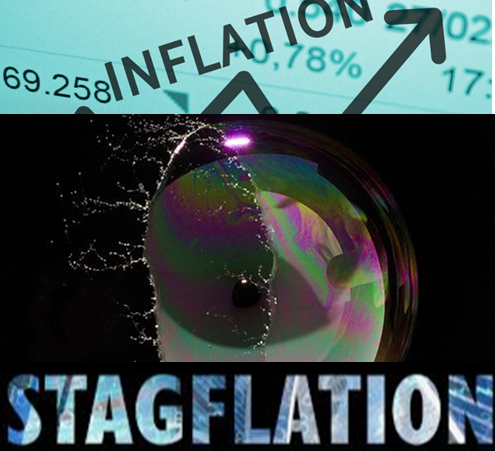 This is one of the shortest Murrinations that you will read! Further to our posts BOOM - The Doomsday Bubble Is Now Bursting and The Risk-Off Tsunami Is Upon Us, the evidence continues to build that the asset bubble is busting in equity markets and credit markets with dire consequences. The rise in inflation is consistent with the third phase of a 54-year commodity cycle rally that started in March 2020 and which is now building momentum. A move that is further being compounded by supply chain constructions in the UK due to a lack of haulage capacity, and globally as China slows down. 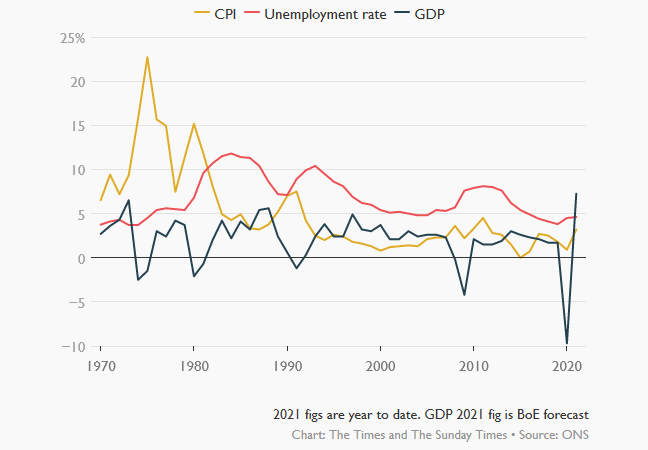 The above chart gives a comparison between todays conditions and the 1970s. At present inflation remains within the upper limit of the past 20 years. However our K wave analysis suggests that post the collapse of the Doomsday Bubble over the next 6-9 months, inflation will follow a path similar to that seen between 1970 and 1975. Creating a condition of hyper stagflation in the Western World.

The Bank of England recognises that, with higher inflation, rates will have to rise, and the FED will soon follow. The anticipation of inflation and rate rises will collapse the equity markets that are as long and blind today as they were at the peak of 1929. The Doomsday Bubble collapse will cause a temporary reduction in inflation as demand collapses. However, even after the asset price collapse is complete, systematic commodity inflation will increase, as the competition for resources between the West and China reaches new levels. This will induce a state of low growth and high inflation, known as stagflation, which will continue the wealth destruction started by the asset price collapse. Only countries (Johnson, please take heed!) that induce high growth rates via low taxation will escape this inevitable degradation to economic growth and prosperity.

Consequently, the next five years will be extremely tough economically, geopolitically and politically, and have similarities to the first part of the 1970s. To learn how to best navigate the rapids ahead, read more market predictive service.

Podcast: The Bursting of the Doomsday Bubble

Damn right, it's a house of cards

The UK economy is a house of cards built on ludicrously low interest rates. Also, public sector spending and a largely non-productive Civil Service, sitting on their backsides 'working from home' but demanding fat salaries, will wreck the economy. Even a child can see that HS2 is idiotic in the extreme; spend the money on defence and nuclear power stations NOW. And close the bloody borders to illegals!