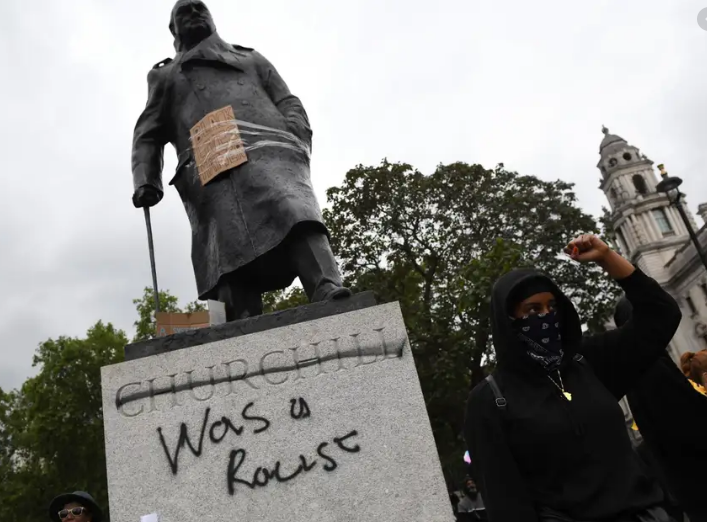 Britain abolished slavery in 1833, which meant that racial integration commenced from the early stages of maturity post-1805 (the third stage of Empire) and continued through into the stages of over extension and decline into 1955. What is little known I that having banned slavery within its empire. Britain then committed its self and the Royal Navy to the abolition of the slave trade on the oceans which it ruled by Pax Britannica. At the heart of this ground breaking campaign was the West Africa squadron which peaked at 25 ships.Over a 60 year period some 1600 slave ships were captured. Releasing 150,000 slaves, the majority being Africans being shipped to either North or South America, at the cost of 1000 sailors.Simulnatously the Royal Navy also interdicted and shut down the Arab slave traders in the Indian Ocean. Thus is should be remembered that it was the British Empire that used it hegemonic power to abolish slavery in the Super Western Christian Empire, its colonies and the oceans it controlled.

Since then, Britain has started a new organisational cycle of regionalisation from 1970 onwards, that lasted up until leaving the EU this year. It is important to emphasise that this is a whole new cycle of national reinvention, which although it has ties to the past and British Empire cycle, is primarily all about adaptation and optimisation into and new improved national identity that maximises national mobilisation into expansion.

During this new regionalisation period, Britain has been integrating immigrants from its old colonies into a new expanding multicultural society, that we shall examine in detail below. This phase, has made significant advances in building a genuinely multicultural society. To achieve this Britain has continued to harness one of the UPS that built an empire, based on a relatively small population. With only a small population, that ruled by sea power as opposed to traditional occupation it was forced to integrate its culture with those within its empire. Evolving into a unique blend of working together to allow it to rule the biggest empire the world has ever seen. India is the clearest example of this style of rule. This gave Britain a level of cross cultural understanding that was unique and that persists to this day.

Whilst British history is far from perfect, it is important that we learn from the past and from our mistakes. By appreciating that that human social values have thank goodness evolved. As such, we need to embrace our history rather than rewrite it, by removing of defacing the statues of Great nation builders such as Churchill, that appear to have failed a code as judged by today’s standards, applied retrospectively. After all, if civilisation is to progress, then all those in the past will fail by the standards of today.

Looking ahead, Britain has completed its first stage of a new cycle of regionalisation and is now embarking on the second phase of expansion post Brexit. During that first stage, Britain has been defining its self as a multi racial and a meritocratic system. Indeed, it is already one of the most tolerant societies, but the meme Black Lives Matter, provides the opportunity to review in a balanced way all aspects of social integration and equal opportunity and to then implement reforms that will enhance our society for all races. Boris’s liberal views will support this process of national self definition. But what is really critical, is the investment into the regions that are poor, to uplift these regions and facilitate education, opportunity and integration. Britain has already broken the historical norms of a regional civil war enacted peacefully, so it is capable in this cycle of creating the vision of a fully integrated multiracial, meritocratic society. The first in human history.

A period of social discontent ahead

In summary, both America and Britain face a period of popular and potentially violent discontent, driven by economic contraction. This will exacerbate fractures within both societies. However, whilst Britain’s can be mitigated by the creation of a vision of an integrated society, America's will be harder to diffuse, and if handled with excessive force, runs the risk of escalating significantly. Tensions will inevitably rise going into the November election and once the result is declared, there are further risks that Trump supporters on the far right, may feel they have been robbed. In short, the challenge ahead for America is social cohesion which will require great leadership.

Struggle between democracy and autocracy, can we win against China?

The real irony is that whilst America turns inwards upon itself, its enemy China, with whom it is effectively already at war, is on the move with respect to its expansion inside the first island chain and beyond.Thus, the real irony in the Black Lives Matter movement, is that because America is a democracy, it allows freedom of speech and expression. Although imperfect, it is far superior to the autocracy of China, as the people of Hong Kong are about to find out with the new security law that suppresses free speech. A great American leader would reverse the negative polarisation process within American society, by galvanising America against its common enemy, China, and bonding it to a common cause to ensure its survival. The fact that Trump has not taken this path, when the virus emanated from a Chinese laboratory, is a shocking failure of leadership and vision. One can only hope that the next US president understands the need and power of such a political course, if democracy is to survive this decade.

China won't be nice when they win

China will win and they won't be nice to other races, particularly ones with bad habits.