Israel and The Middle Eastern War of Regionalisation 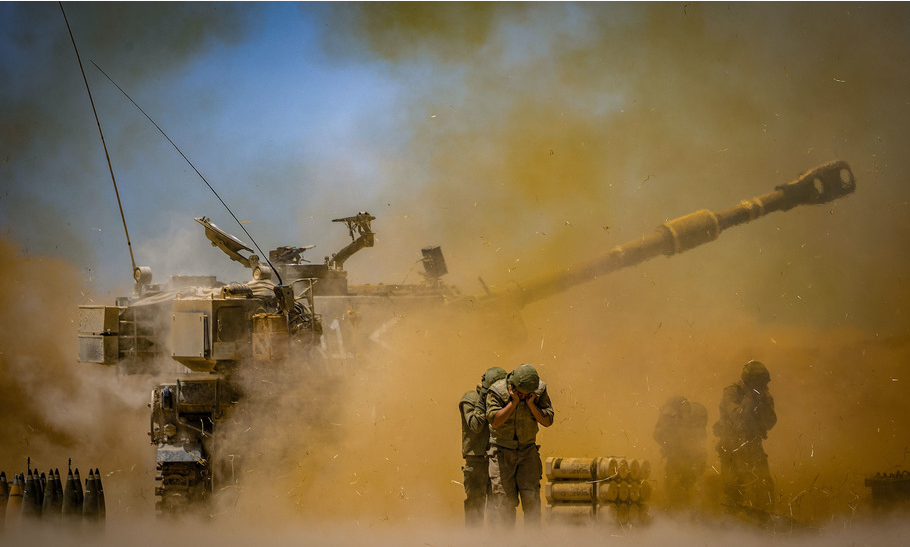 To better understand the complexities of the ongoing regional civil war across the Middle East over the past two decades we have been modelling it as a regional civil war with multiple competitors that are seeking Islamic self-determination. Noticeably, as the regional competition becomes more overt and British, French and American influence in the region has reduced to the lowest ebb in a century. Simultaneously, exported Islamic terrorism into the West is at its lowest for many years. However, it has found fertile ground in parts of Africa where it must not be allowed to take root.

Meanwhile, the genocide of the Uighurs portends to the threat of the Chinese to the region and the alignment of Western and Islamic forces against the CCP as occurred in Afghanistan against the Russians. This external threat will inevitably force all the parties in the region to unite in common cause and, as such, within the next four years it could the future cessation of the Middle Eastern Regional Civil War. To better understand our construct of a Middle Eastern War of regionalisation, please read:

The Clash Of Christian and Islamic Cultures In The 21st Century: Part III Players In The Middle Eastern War Of Regionalisation

Regionalisation and Civil War In The Islamic Middle East 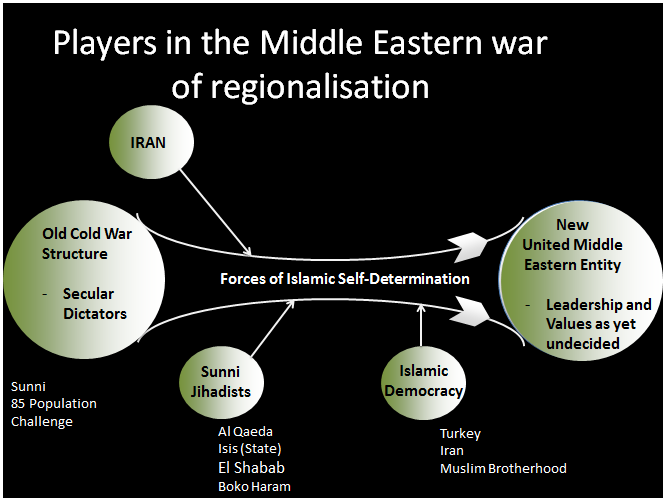 As the main players have become stronger so has the intensity of the conflicts. There are now three main power blocks  contesting power in the region.

The current conflict is the direct product of the regional civil war, although Palestinian factions are fighting inside their own West bank for power and which has catalysed the recent attacks on Israel. There seems to be little mention in the Western press of Hamas acting as a proxy for Iran and who has been faring badly in its regional ambitions under Israeli and American attacks . Both Hamas and Iran hate the Jewish people and its State. So much so that they have made its eradication their prime goal, using the cause to polarise support for its ambition to eventually control the region. Thus, until Iran adopts a peaceful stance in the region and against Israel this struggle will inevitably continue. The only hope of a change is through regime change otherwise the conflict between the Palestinians and Jews will be continue to be fanned. The map below shows the expansion of Jewish territory via its settlement policy and it demonstrates the intractable nature of the Palestinian Jewish conflict along with the almost inevitable outcome of total Jewish control of the country. Even if it was the Arabs that started the whole process by initially selling what they thought were worthless salt marshes to the early Jewish settlers. Yet they, like the Israelis, deserve a homeland, be it in Israel or by agreement with Egypt in the Sinai. The sadness of the situation is one of "the abused has become the abuser" and until the Jews, as the most powerful element of the relationship, truly rise above that subconsciousness and repeating pattern, there will be no lasting peace. 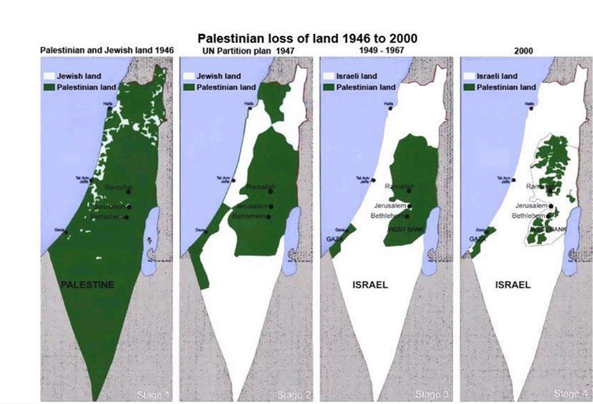 The recent wave of rockets being launched at Israel by Hamas have been built locally using designs provided by Iran. Significantly, they have a longer range, greater accuracy and more destructive power than previous models. They are being moved around via an underground network, a tunnel system of many tens of miles nicknamed the "Metro" and which has been the IDFs (Israeli Defence Force's) main target in its counter air strikes, on the premise that with the Metro's destruction the rocket attacks will cease without the need for a ground invasion.

Only the highly capable Israeli designed and built Iron Dome defence system has prevented a much larger civilian death toll as they have intercepted over 90% of incoming Hamas rockets. However, Hamas only needs to get lucky once to inflict large scale casualties. No wonder Israel is determined to protect its people, many of whose families fled the Holocaust, suffered expulsion from Muslim countries or persecution elsewhere. As part of that continuum, Hamas is engaged in a genocidal war against the Jewish people. Yet one must look behind the veil, so as make no mistake that this war is a product of Iran’s aggression. As such, the West should uphold Israel’s right of self defence, whilst it ensures that Israel uses its overwhelming force with judicial restraint to prevent unnecessary civilian casualties. If it does not, Israel risks risking losing all Western support. That being said it must be assumed that Hamas has located its military infrastructure within its very own civilian population, to camouflage it and to inflict PR reversals on Israel if they are hit and civilian casualties emerge. The classic "human shield" tactic.

In the big picture, America and the West must increase pressure on Iran to bring about regime change which is the only way of creating a lasting peace in the Middle East, and to remove a regional threat to stability. With Chinese power extending further into the Middle East at an accelerating rate, the window for such a strategic shift will close in just a few years as the risk of  a major US-Chinese proxy war increases, thereby amplifying the current regional civil war,

Consequently, bold and hard line policies to further constrain Iran are required by Biden's America going forward. As part of a strategy that should not include another attempt at a very flawed Obama-type Iran nuclear deal, which was driven by presidential narcissism and delusion and would only strengthen Iran's hand.

Predictions For The Next 10 Years: Part VI The Middle East Is In A State Of Regional  Civil War

Gaza, and The Ongoing War Between Israel and Iran