Judgment Day For The Lockdown Brigade Is Inevitable 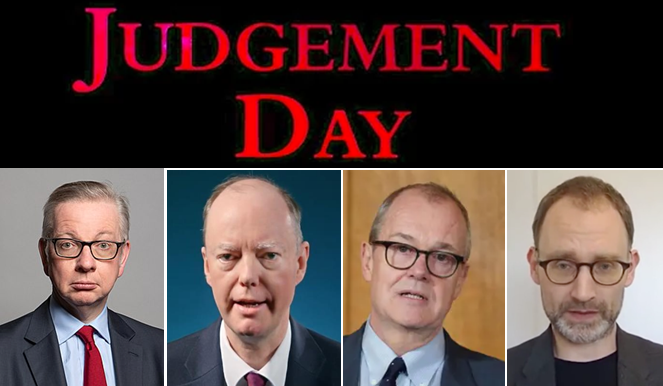 During our Murrinations since the pandemic outbreak in early January, we have been well ahead of the curve and predicted the unfolding of events well ahead of time. This has included the need for a full border lockdown in January 2020, the onset of the first wave and that the pandemic would take the form of a multi-wave multi-strain pandemic that would last for at least 18 months. Most of all, I have consistently argued there was a balance to be struck between living with the virus and sustaining the economy through what I anticipated would be a long struggle.

In early March 2020, I proposed a pandemic strategy that would completely shield the over 65's in complete isolation, allowing the young to operate the economy whilst increasing hospital beds and care ratios, to minimise deaths whilst developing herd immunity in the young and healthy sector of the population. This is a strategy that I believed was correct. However, the government's slow responses to events and the multiple failures of the NHS one of which exacerbated the exposure of the over 65's, rather than reducing it. These grievous errors were then compounded by the low national bed ratio which meant that to prevent the NHS from being saturated, we needed a full lockdown. What is alarming, is that even at the end of the first wave, there were no plans put in place to respond differently to the next wave, as everyone just hoped there would not be one. Then, low and behold, we ended up in an even longer and more destructive second wave lockdown, based one even more suspect death and infections statistics.

There is no doubt the UK government has been guilty of trying to scare the population into compliance over lockdown, which is why they have been using statistics on Covid deaths that are not representative of what is happening. Additionally, the PCRs tests, estimated to create 20% false positives, have inflated the number infected and associated deaths by a similar amount as well as the r number.

The real story of the impact of the pandemic's two waves is best shown in the below chjart of the 'excess' death curve. The deaths in Wave 1 were predominantly in the above 75 to 85 age group. Notably, they took place at a time in spring when average deaths decline. In contrast, Wave 2 has taken place when excess deaths reach their seasonal peak. However by ignoring excess deaths and reporting total Covid deaths the government and press intentionally exaggerated the impact of the pandemic. Once again in the second wave, the predominant number of deaths occurred in the over 75s, although the above 45s were not immune if they were overweight or had co-morbidities.

Additionally it is estimated that 60% of all deaths occurred in those that were officially registered as handicapped. The conclusion is that much like a virulent flu, this pandemics' main deaths have been focussed in the weakest sectors of society. This has left the fit and young relatively unscathed. This pattern was clear during the first lockdown, strongly supporting the notion that the under 50's could have been operating the economy continuously out of a lockdown since the end of the first wave. So, why did the second lockdown ever need to be implemented and why are we still in it?A qustion i will try to answer next. 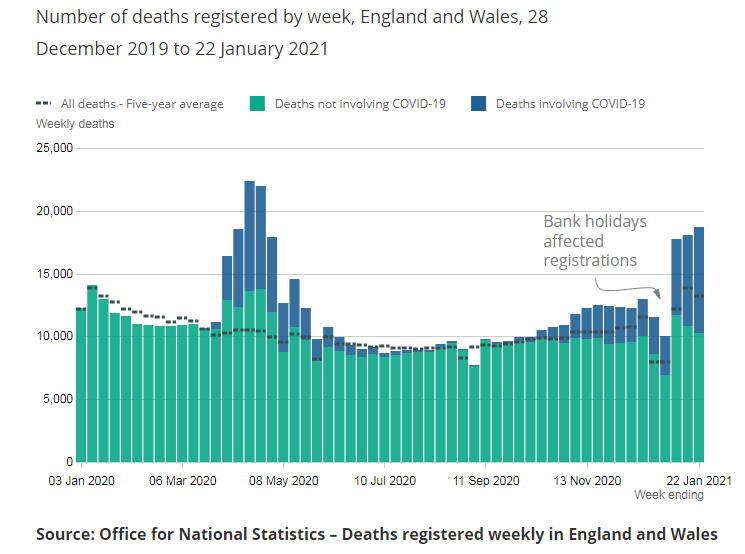 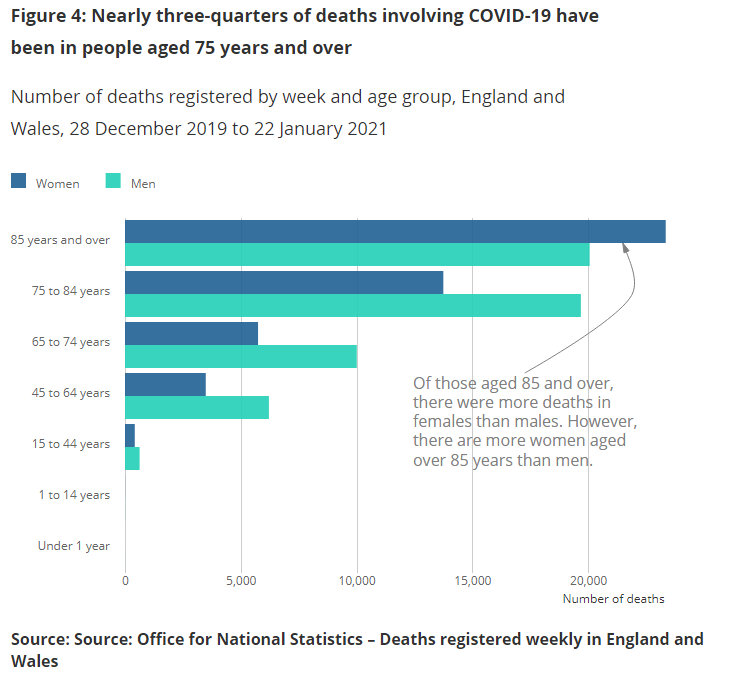 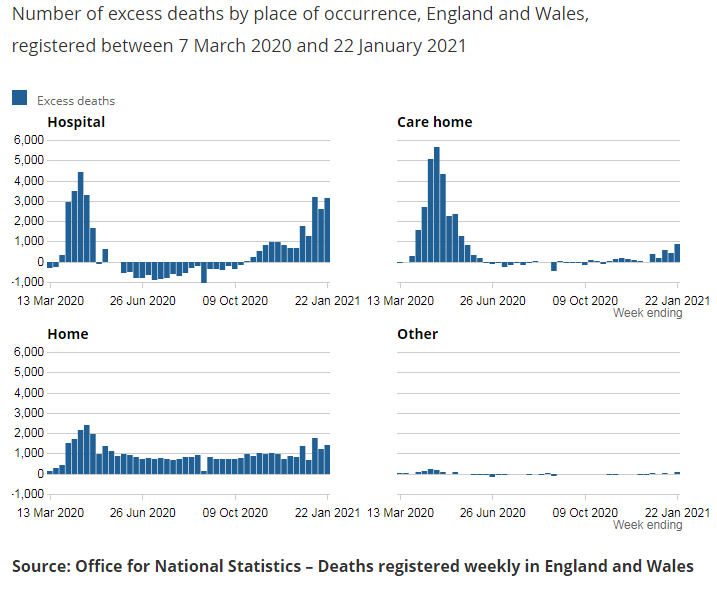 The above chart shows that in the first wave the majority of deaths were in care homes, but in the second wave that care homes suffered minimal deaths. The conclusion is that shielding protocols have been successful, demonstrating shielding is effective, which should have allowed the younger population to operate the economy rather than being locked down.

Responses To The Spanish Flu Compared To COVID

Comparison to the Spanish Flu pandemic is interesting as the government did not intervene and the nation just kept going. Yes, the nation was much more hardened to death, both in peacetime through high child mortality rate and through the First World War. In a population of some 43 million, 228,000 died from the Spanish Flu. This contrasts to today's pandemic that has hit the over 70's the hardest, the two wave Spanish pandemic predominantly killed the young suddenly and almost without warning in a matter of 24 hours. Perhaps this was because death was so commonplace in British society and the population was far more capable of keeping calm and soldering on. Perhaps there is a more sinister political hand at work here that needs to be exposed.

Who Are The Lockdown Brigade?

The lockdown brigade have been lead by the Health Minister Matt Handcock, Chief Health Officer Professor Witty, Chief Scientific Officer Sir Patrick Vallance and the self-promoting Neil Ferguson who was ably supported in the chorus by the Sage and Nervtag groups. All of these have collectively suppressed the evidence from other sectors of the scientific community who believe lockdowns do not work and should not be applied to this pandemic, including the WHO. Whilst scientific dogma might be the explanation to a small degree of these zealot-like beliefs. All of these individuals and groups have gained personal political influence and control in this emergence by backing lockdowns. Notably, as the second wave comes to an end, some of them are advocating a zero-Covid strategy to continue the lockdown for as long as they can. The lockdown Brigade have been ably supported by the BBC who for months have reported almost exclusively on the pandemic, with the singular objective of scaring the British population into submission. In that regard they have succeeded, and in so doing removed any doubt that their version of news is extremely biassed. Thus confirming themselves as committed agent of government propaganda.

The Lord Of Lockdown

Behind the Lockdown Brigade is the lockdown lord himself, who now likes to be known as the Chancellor of the Duchy of Lancaster. No one has been a stronger advocate of lockdown than Gove. Indeed, he has been orchestrating the Lockdown Brigade to reinforce his own personnel strategy. To what end you might ask? The answer is his own advancement. We all know Gove covets the role of Prime Minister, having betrayed Boris once already to attempt to achieve his goal. Whilst Boris may think keeping his enemy close will control him, he has in reality been outwitted at every turn by Gove. It has been Gove that has benefited most in his concentration of power during the lockdown, so much so that having lost Cummings some months back, who was Gove's mole in Boris's ear, he has now managed to squeeze another three of his key advisors into  Boris' inner circle of advisors, making a total of five.

The simple truth is that Gove has become the  covert Prime Minister, especially with respect to the pandemic response, which explains some of the duality of Boris' decision making process. However Gove's actions leave a slug trail wherever he goes, foremost of which is the mess with Northern Ireland that he was responsible for, in the crafting of the EU Brexit agreement. Similarly, there is every chance that Britain has endured and suffered through excess lockdowns, as a direct  consequence of Gove's political ambitions.   In my theory of human collective systems, I highlight the damage that the 2% ‘The Malevolent Unaffirmed’ can cause to a nation. Within this context and very worryingly, Gove's character, ambitions and actions are reminiscent of Lloyd George in WW1, who almost lost the war, as he sought greater personal power and gain.

With Gove running covertly rampant, I fear that unless Boris stands up to Gove and evicts him from the halls of government, his slug trail will continue to cause the nation excessive harm.

So how will the British people and history judge the Lockdown Brigade and their Lord aka CDL?

Today, we live long, healthy lives and we are more sanitised to death than in the post WW1 era. The presence of death naturally has a bigger impact on our society and our politicians. So perhaps it is understandable that controlling the pandemic has taken political priority over the economy. However, I believe this is a  grave error of leadership and government, one obscured by the huge UK,  American and EU financial interventions which have been the largest in history. They have, in the case of Britain, held prices around 62% of the initial fall since February last year in a sideways correction. Notably, the FTSE is the weakest stock index in the Western world.

However, whilst the stock market has been going sideways the UK's private sector economy has been crumbling with ever more bankruptcies and defaults. This is a situation that will only be exacerbated by the Lockdown Brigades' desire to maintain lockdown as long as they possibly can. It feels like the voices of those that protest against the lockdown strategy have become weaker and squeaker with time. 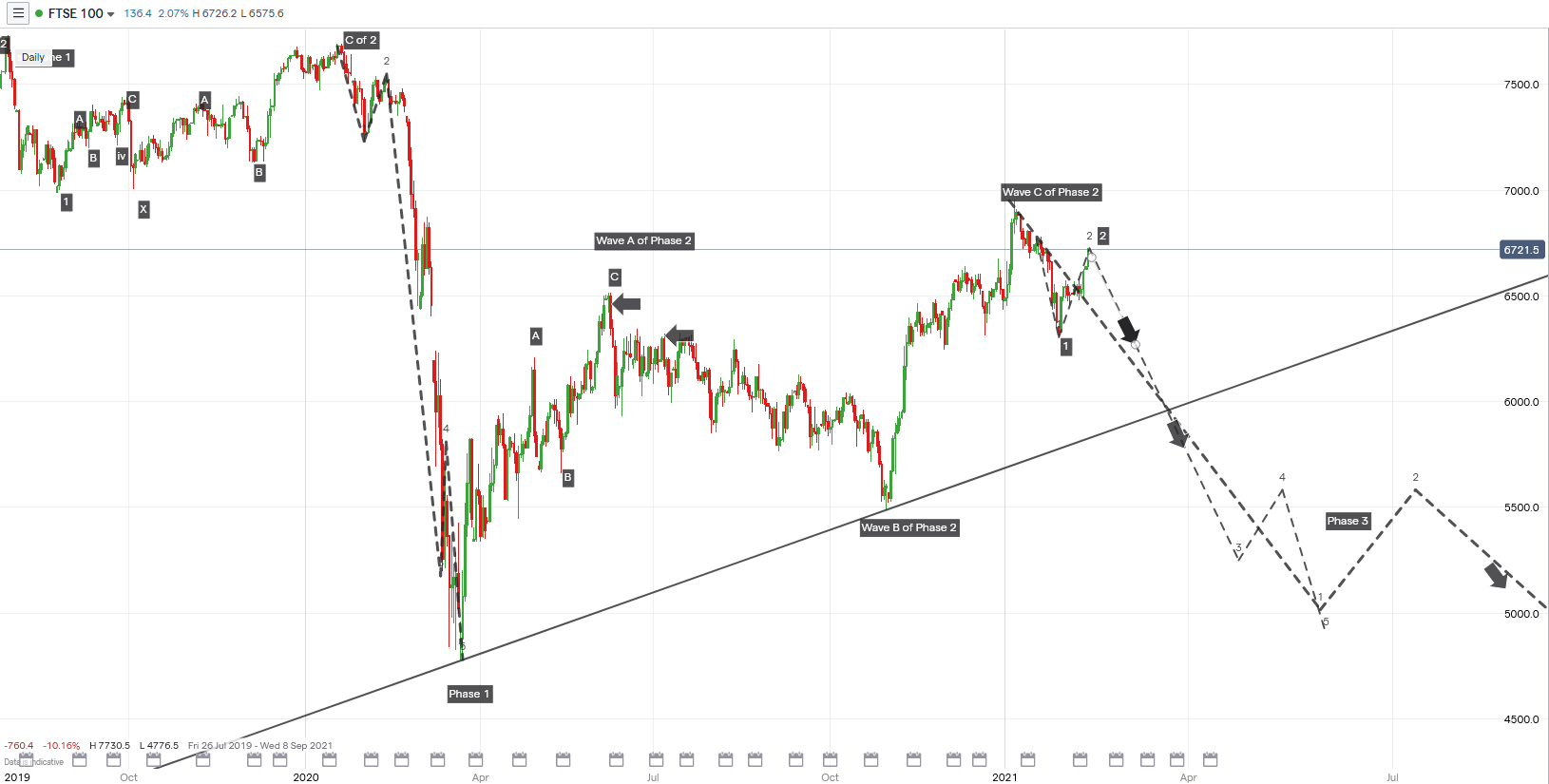 Judgment day will come, both in the real economy with unemployment exceeding 10 million and in the markets. The collapse in the private sector is well underway and its considerable momentum will continue even if we are unlocked. Meanwhile, our market analysis suggests a high probability that the FTSE will fall this year to new lows well below those of March 2020, as part of a major bear market which will then trigger a potential Western sovereign debt crisis. Both of these potential financial crisis will be a direct consequence of the lockdown policies. As discussed many times before, any fall in markets will trigger a collective negative shift in social mood that will turn sharply against the cause of the depression. This is not the pandemic, but rather the government's response to it with repeated and unnecessary lockdowns.

When history looks back at the Government lockdown strategy after a major depression, the overzealous Lockdown Brigade who advocated for such restrictions without considering the effects on the economy will I suspect be judged very poorly by history.

On 3 June 20201 Lockdown 'had no effect' on coronavirus pandemic in Germany ;Scientists at Munich University found German infection rate was already falling before lockdown was imposed By Justin Huggler Berlin  https://www.telegraph.co.uk/news/2021/06/03/german-study-finds-lockdown-had-little-effect-virus-infections/

You hit it on the head David. Gove is a non-trustworthy, slimy, waffling, self serving, unjustifiably pleased-with-himself liability. I do not understand why this man remains so close to the core of power - even with a philosophy (of Boris?) in mind of "keep your friends close but enemies closer".