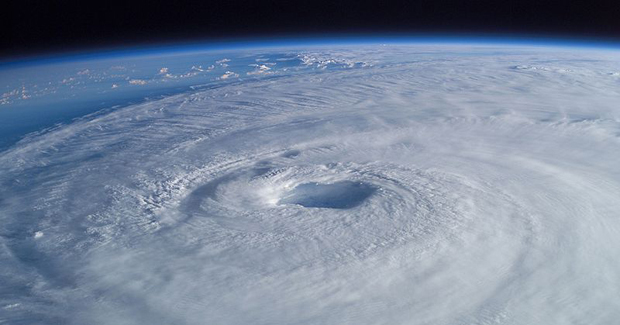 Put simply, the sun's radiation speads out through the solar system and then interacts with the earth's atmosphere to warm our planet's surface and oceans. While the sun's radiation output has remained relatively constant over the last 200 years, the composition of our atmosphere has changed since the onset of industrialisation to include more carbon monaxide and methane. These pollutants have become known as greenhouse gases as they increase the ability of the atmosphere to retain the sun's heat. As the atmosphere warms it will then slowly heat up the oceans which are the planet's great heat sinks. For those that doubt that global warming is a reality, perhaps there is another way to examine the changes we are currenlty encountering globally that is not immediately visible in the slowly changing data of average temperature.

Weather systems are in fact energy systems. Thus, theoretically, as the average temperature of our planet increases we would expect to see the average size and power of the planet's weather systems increase. We also see an increase in the frequency and magnitude of the more damaging storm events. We are reminded of the recent typhoon or hurricane Hainan which is certainly one of the biggest in human record, not just in the wind speeds attained but the size of the weather system. This storm is but one in a long chain of extreme weather events taking place across the globe marked each time by the comment that is one of the 'largest or most damaging events in recent history'.

What is well underway is an extensive study of the peak energy and frequency of these big storm systems, to evaluate if they are becoming larger and more frequent with the time. The graph of the Atlantic storms per year does show the expected trend of more and bigger storms with time. No doubt, if the same study was to be done in the tropics a smilar observable behaviour would appear as shown in the pattern of Atlantic storms per year.

Another area of import study, is the evaluation of the increase in the average wave height in the oceans using radar satellites, and as the atmosphere heats up we would expect to see the wave aptitude increase long before we saw the evidence in the increase of the average temperature of the atmosphere. Such information broadcast widely will also be very valuable with regard to shipping and its safe passage acrosss the oceans.

Both weather systems and wave height reserch are helping in providing new evidence of the termperature changes our planet is currently undergoing, to confirm what the majority of the population already know, and our politicians seem so happy to deny.

I commend all readers to the vital and superb work in this sphere of research on 'air-sea interaction' our excellent National Oceanography Centre http://noc.ac.uk/science-technology/earth-ocean-system/atmosphere-ocean/air-sea-interaction.