Nelson Mandela: A Great Light in the Affairs of Man 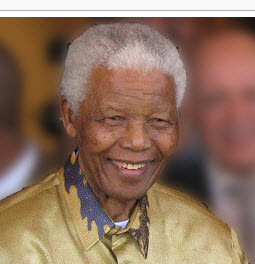 In order to understand more thoroughly Nelson Mandela’s magnificent achievements, one has to appreciate the geopolitical context of his life and to do that it is necessary to look at South Africa’s history and its phase on the empire cycle. From the time of its independence SA started its regional process and its population expanded unevenly with the black population growing faster than the white population, exacerbating the latter’s minority position. As with all other similar social systems it was just a matter of time before the larger demographic group of the black population sought proportional representation and equality compared to the minority white ruling group. Apartheid was implemented precisely in anticipation of just such a demographic imbalance and thus became a very resilient and brutal policy of an entrenched and increasingly isolated regime. The protracted civil war conducted by the ANC is best described as a civil war of regionalization whose outcome was decided as much by external forces as by the internal conflict.

To grasp the timing of that power change in SA, one has to step back and master the geopolitical architecture of the Cold War at the time. A world which was dominated by the stand-off between the West and NATO on the one hand, and the Communist Bloc and its Warsaw Alliance partners on the other. In that great game the value of South Africa on the chess board was its proximity to the vital trade routes around the Cape of Good Hope. Communist ideology had traditionally held tremendous appeal to any revolutionary cause embracing the disenfranchised, fighting regimes with intrinsic and historic wealth, especially when facing nations of western influence. In the case of the ANC we can assume that there was a strong connection with communist regimes, which was wisely downplayed lest the struggle be perceived as not black versus white but rather communist versus capitalist. At length, it became the latter risk which gave greatest concern to the West, so much so that despite strong public opinion against apartheid the West secretly supported and sustained the apartheid system because it ensured western and especially NATO strategic interests.

When the Berlin Wall came down and communism collapsed in Europe, there was no longer the same threat to the Cape trade routes from the communists and thus the West no longer needed to support the apartheid government and it imploded, forced to seek terms with the ANC. In the new paradigm the West was quick to support Mandela to cover up its past support of the apartheid regime in return for not been reminded of its past role, whilst the West , conveniently, closed the books on any past ANC links to communism. Thus one might accurately say that Mandela was as much a prisoner of the Cold War as he was of the apartheid regime, and he had to wait for the geopolitical shift to unfold to ascend to power. Both sides then joined hands to walk the path to a new future.

Having set the geopolitical scene it is interesting to look at other comparable events that BTCH would classify as civil wars of regionalization and the character of the resultant leadership during and especially after the war:

In each war there was a specific leader who fought and lead the fight and then came to rule the peace, post conflict. In Britain, Russia and China dictatorship and intolerance for any opposition followed the civil war. In sharp contrast in America both Lincoln and Grant sought to reconcile the two halves of a wounded nation, though their methods might by modern standards be considered harsh at times.

However, it is Mandela who truly stands out in the context of leading a nation after the conclusion of a civil war. The nation he sought to unite was truly a ‘rainbow nation’, not just split into blacks and whites but into many more subdivisions. The whites were either Afrikaans of Dutch descent, or English descent both with very different cultures. The blacks were divided into tribes; the most numerous were the Xhosa and Zulus. Lastly there were the coloreds descended from the Indian sub-continental races. Faced with such an enormous challenge Mandela sought to unite his people with the bonds of tolerance, forgiveness, understanding and love. These laudable principles are normally associated with man’s spiritual aspirations, but rarely seen in the day to day activities of the leaders of men.

He was able to communicate and instill his message to his people because of who he was. A man of great intelligence, and a boxer with the strength and courage to fight for his beliefs at great cost to himself. A man who suffered greatly during his long imprisonment, walked a path to transform his own anger into forgiveness, and who communicated these ideals to his fellow prisoners and prison warders so that they too came to share his beliefs. The combination of the the African value of 'Ubunto', roughly translating to “human kindness”, representing a South African humanist philosophy and the ability to collectively forgive and forget, allowed these ideas to spread in a way that would be impossible in the rest of the world. As such, whilst honoring Mandela, we the rest of the world, should also honor his people and emulate their actions in this regard.

Madiba, as he was known to his people in an expression of love, was the rarest of leaders who truly served the people he lead, rather than himself. He transcended the political into the spiritual and in the process not only led his nation but the world with his beliefs, ideals and actions. We are all truly privileged to have been touched by him, and can only hope that we as a human race can follow his example to reconcile the differences between nations as he did among his own people.