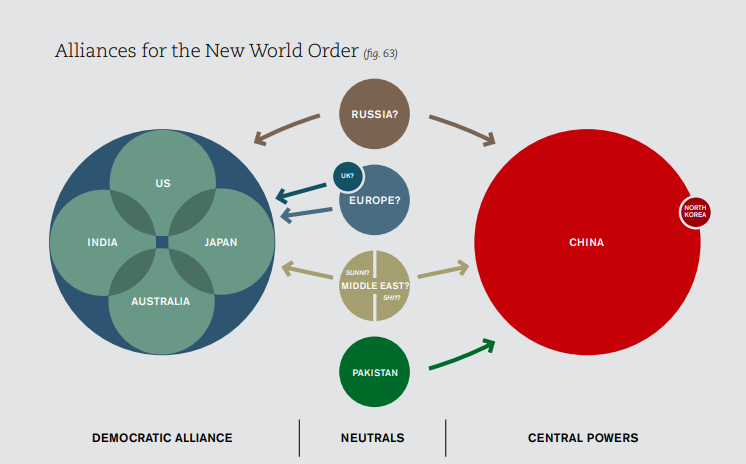 New threats begat new alliances, especially when an old hegemony is in decline and needs allies to hold back the young hegemonic challenger. I sought to anticipate what the new alliance structure would look like in the run-up to a potential WW3 from 2025 onwards. I have included the extract of my thoughts below.

The danger for China is that its aggression acts as a catalyst to unite countries against it. Where once Beijing could pick countries off one by one, it might be more constrained if the so-called Five Eyes group of nations - the US, UK, Australia, Canada and New Zealand - joined forces with other democracies - such as India, South Korea, Japan - and other nations - such as Vietnam or Malaysia - to push back against China. Last Thursday foreign ministers from the Five Eyes network discussed what further action they could take over Hong Kong. The so-called 'quad' of Australia, India, Japan and the US - are beefing up their defence cooperation. There is talk of a new so-called D10 group of nations - the G7 plus Australia, South Korea and India - to generate non-Chinese technology.

The only element missing is a formal name to what I have called the Pacific Democratic Alliance.

Simultaneously an objective that should demand the highest level of foreign policy focus from Britain and her European allies is to entice Russian back into the Western fold so China is surrounded. Britain is in an ideal situation to lead this initiative. Although Putin has to date been an enemy of democracy, his nation and personnel fortunes have suffered at the hands of China with the release of the pandemic. The story of Britain's rapprochement with France in 1906 in the Entente Cordial should act as an inspiration to Britain today as France had been its main enemy for centuries, but the rise of the second Reich resolved their differences to face the Germans.

An Extract from The Book Of The Future Breaking the Code Of History 2010.

Geopolitical power in the run-up to the twenty-second century will be split into three key blocs: the centralized powers, the democracies and the neutrals.

What I call the centralised powers are those states that seek to revise the current world order and are the motivators of change. China is at the heart of this trend, steered by a centralised government, economy and military. It is driven by expansion and, as we have seen, can summon huge economic funds with which to secure access to natural resources from commodity-producing countries. Its recruitment strategy can be summed up by the well-worn phrase ‘the enemy of my enemy is my friend’. In this case, the principle perceived enemy is the US.

The road to conflict starts when states turn their backs on each other as allies. Since the collapse of the Berlin Wall, the West has taken two diplomatic courses concerning Russia. The first, spearheaded by the US, continued to press its advantage and expand NATO’s hold on the borders of Russia, triggering historical insecurities and wounding Russian pride. The second, led by Germany, sought to integrate Russia into a European system for fear that the consequence of snubbing it would be to force it eastward. Germany has worked hard to engineer strong links between Russia and the EU, but its efforts have been overshadowed by the actions of the US. Russia is turning against the West in a significant step back towards the Cold War.

As Russia moves further from alignment with Europe and actively against the US it will be drawn to the prospect of stronger ties with China. Although there is great mutual distrust between these two states the countries do have complementary profiles. One is long on people and short on resources, the other the precise opposite. Both countries have centralised governments and a history of strong political links. Only a growing Russian relationship with Germany might counter the lure of China for Russia.

China’s secondary threat is India, the only country that matches its manpower resources. China has thus fostered ties with Pakistan that will only become stronger as that state’s relations with India and the US worsen in the face of mounting radicalisation and fallout from the war in Afghanistan. China might attempt to encourage the growth of Islamic fundamentalism directed towards the West and also the growth of anti-Indian sentiment. Such a strategy would encourage the removal of US influence from Pakistan. The global financial crisis has had a profound influence on Pakistan’s economy, and it is China, not the US, that is looking to shore up Pakistan (no doubt at a price). China has also sought to ensure that Pakistan’s nuclear arsenal balances that of India, and it is currently supporting the Pakistani nuclear programme in its development of plutonium-based weapons that are smaller and better suited to a variety of missile-launch vehicles.

A centralised alliance would consist of China, Russia and Pakistan. Given these states are all are linked by overland communications networks it would be predominantly a land-based alliance, although it could be expected to pose a significant naval challenge along the lines of Germany in 1914. Rounding out the group is a host of states that stand in opposition to the US and are thus potential allies of either Russia or China, such as Cuba, Syria, and Venezuela.

The democratic states, led by the US in decline, will work to translate their technological military advantage and political influence into the structuring of an alliance. They share common values in international policy that are grounded on the freedom of the individual, and they command enormous financial resources backed up by US military technology and power.

Japan has the second-biggest GDP in the world and an equal level of technical sophistication. Their common cause is the containment of Chinese power in the region and the importance of Japan to the US is demonstrated by the anti-ballistic missile defence technology the two countries share.

Both countries are forging strong diplomatic links with India, the third democracy in the alliance. Japan’s diplomatic overtures to India began in 2004 when it provided it with substantial economic aid. The US followed in 2005 under the Bush administration, somewhat in the tradition of Richard Nixon’s engagement with China in 1971–72 which brought to an end two decades of mutual estrangement. Similarly, and most critically, it also further isolated Russia, redefining the Cold War map. Although Bush’s visit was hardly noticed outside India the mission was a great success, drawing the vast country away from its historic military links with Russia.

The US recognised that India’s billion-plus population and growing economic power would make it a formidable ally. Its achievement of deeper ties came at the price of disregarding India’s non-compliance with the NPT, as well as its promise to strengthen political and military cooperation. It also paved the way for the US to replace France and Russia as India’s major source of arms.

A democratic alliance would consist of the US, Japan and India. As a commodity-rich country identifying as Western, Australia would link itself to this axis in principle as well as for protection against an expanding China. Canberra’s ties with Washington are strong, but in time it would ally itself more firmly with Tokyo and New Delhi.

Europe is still in a regionalisation stage, redefining itself within a new and larger political structure. As such, it can be expected to be neutral concerning projecting power outside its borders. Europe does not currently have the military infrastructure, capability or will to involve itself in the Asian sphere of influence. All it can do is defend itself against any future direct attack. Only if Europe faced attack from a remilitarized Russia would this dynamic see an exception, demanding the rejuvenation of NATO. Such a scenario, however, is unlikely in Russia’s legacy stage. The role of Britain, on the other hand, is not determined. Although a longstanding member of the EU, it has strongly allied itself to the US throughout the twentieth century. Under a disastrous labour government, Britain suffered a significant economic setback, but its geopolitical view of the world and its enduring Commonwealth ties could make it a key part of the new democratic alliance, particularly for India and Australia. Indeed, the decline of Britain’s special relationship with the US will arguably enable British foreign policy to be more balanced and objective, and thus effective, in the coming decades.

As an empire falls into decline, so does its web of alliances, which have been created to strengthen its borders. The larger partners may be able to defend themselves, but the smaller ones become prey to the new order. For the US, three diplomatic relationships are worthy of discussion in this regard: NATO, South Korea and Israel.

Formed at the end of World War Two to counter the Soviet threat, NATO achieved its primary mandate with outstanding success until the end of the Cold War. Since 1990, it has struggled for a sense of purpose and has become involved in war zones (like Afghanistan) that dangerously displace it from its original principles. At the centre of the NATO, the rationale was the need for the US to remain linked to Europe for the latter’s defence, a perspective that derived legitimacy from the US’s successful intervention in the two world wars. NATO’s participation in the US’s overseas wars (in which very few of its member states contributed armed combat forces) threatens the future of the alliance. Furthermore, the US has used NATO to relentlessly extend its influence to Russia’s borders, inflaming Moscow’s insecurities even as NATO’s perimeter extends way beyond any serious defensive structure, affecting its very credibility.

With the decline of its power, the US can be expected to withdraw from Europe as it faces the challenge from China, leaving the former to defend itself. In response, the EU, gaining traction as a centralised entity and wishing to make its dream of a ‘United States of Europe’ to the next level, will have to organise its military force. The creation of such an institution would be the beginning of NATO’s replacement over the next two decades. NATO’s current perimeter would then contract to a more defensible size and a buffer zone might also be created with the old NATO states that do not participate in the EU’s new alliance.