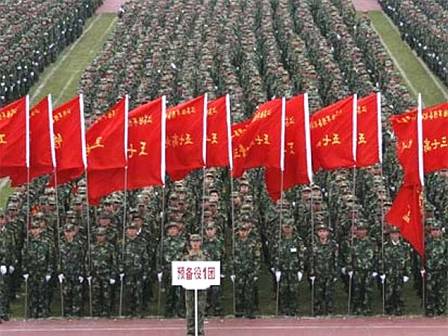 The reader will have noticed that in both the previous sections only one nation has been mentioned twice and that is China. In our assessment China's power will continue to grow at a staggering rate that will astound even those who anticipated great expansion. China represents a fundamental challenge not only to the western way of life but to the whole world.

America's pivot eastwards demonstrates that the world's one declining superpower is finally taking China seriously, and is actively constructing alliances designed to contain this expansion. However that construct is currently more political than military. As the Chinese-driven arms race gathers speed political rhetoric will have to be matched with economic power translated into military muscle. When a nation's security and perhaps even survival is measured by its economic means to pay for is defence, the importance of economics takes on a new meaning. Within this context America's current financial condition, perilously maintained by the printing-press, must be revitalised. The only way that it is possible to see how this might occur is to say the least dramatic, i.e. through voluntary debt restriction and a managed return to economic reality. That is the only chance for America to regain an economy that is able to fund the arms race that China has now commenced. The sooner such a restructuring takes place the sooner America can start rebuilding and once more competing with China. The other option, if America continues to sleep walk, is that at a time of China's choosing it triggers a debt default, as America tried to do to Britain during the Suez Crisis. This would have catastrophic consequences that would disable America, giving China a major relative economic advantage.

Western defence spending is now required to invest in primary combat power i.e. naval and air units. There will also be a need for sharing weapons technology with less developed allies such as India. Henceforth the West must be accurately tuned to the signs of transformation in military affairs in China that could significantly and relatively quickly change the balance of power.

To be very clear in the magnitude of the challenge we face, China is like no other threat that the West has ever seen since its rise five hundred years ago. First, China aspires to be the third great world sea power after Britain and the US. Unlike Britain and then America which became demographically constrained as land powers (Britain in Europe and the US in Asia), China's demographics make it potentially the greatest land power in history. This combination of potential land and sea power is unique. If lessons from our past with German and Japanese aggressive expansions are digested properly, they suggest that it could take an alliance of the whole world including Africa, the Middle East and Latin America to contain Chinese military build-up. This expansion and determination to use such new found power will over the next few years become obvious to everyone.

Viewed in this context China is by far the greatest of all the threats faced by the West, with potential to change the western way of life drastically. Consequently China demands the full attention of not only America but all its allies, and that especially includes a rather comatose Europe. The first vital step is for politicians in the West to wake up quickly to the Chinese threat and develop the ability to protect western society from cyber espionage and attack. This will also send a message to Russia.

The only solution to this Chinese challenge over the next decade is, so far as possible, to employ a similar strategy as used in the Cold War to reduce the risk of conflict by matching China's expansion with the creation of a global political and military alliance, lead by America. If the strength and integrity of such an alliance were to match China's growing power, then the risks of war can be expected to decrease after 2025 when the commodity cycle begins to cool as it enters a twenty-five year decline.

The harsh reality and inevitability as explained in BTCH is that the West is in terminal decline as a world power, with America being the last of the Western Christian Empires. The Asian Super Empire led by China is clearly in ascendancy. Management of that power shift is the responsibility of current politicians and those of the next decade. If America continues its current economic path, its collapse will be precipitous and will consequently create a power vacuum that China's current youthful incarnation will quickly step into with potentially destructive consequences for all humanity.

The key challenge to managing this once in a five hundred year power transition peacefully is first by maintaining a strong defensive capability, and secondly by developing widespread understanding in the West of Chinese history and culture and the process of the rise and fall of empires that provide an appreciation of the other side's perspective.

Contrary to the polarisation process that will inevitably take place as competition increases, the Chinese are not in any way inherently bad. We would describe their history as one of the most admirable and remarkable on human record. However they are currently in their sixth empire cycle and this current reincarnation would best be described as having the dynamics of a youthful boisterous teenager. A youngster who in time will grow to become wise and more respectful to those around him, much as an old father night seek to pass control of his family business to his son. This transition needs to include recognition by the West of its own mortality, an understanding of China and the strength to resist the poorly judged impulses of youth.

Any other option is just too horrible to contemplate.