The Collective Denial of Climate Change 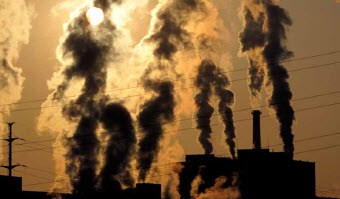 In Breaking the Code of History (BTCH) I dedicated a whole chapter to climate change, and presented evidence that human industrial activity was the cause of climate change. I also expressed surprise that there was so much confusion in the public domain as to the scientific evidence as to whether global warming was real or not.

Last week’s news gave exposure to the release of a recent study of 12,000 scientific articles on climate change, of which 97 percent of them agreed that man’s industrial output is responsible for global warming. Thus the scientific evidence is beyond refute and the consensus amongst these experts that climate change is a real event. Yet only 57% of the public believe that this is the situation, and of that 57% there will no doubt be many who accept that climate change is real, but do not see its immediate consequences as risks that will impact upon them, and thus will not advocate corrective action.

It is important to remind ourselves that since the start of the Industrial Revolution the average temperate has risen by 0.7 degrees Celsius and the evidence is that the changes that have been slow to start, due to the inertia of the oceanic heat sinks ,are now accelerating.  Predictions for change under the IPCC’s most optimistic scenarios suggest  rises between 1.1 and 2.9 before 2100. Whilst in our opinion more realistic projections could see double those increases. So what process is taking place that allows the world to continue along this blind alley, even allowing for the way the human brain discounts for the future, in favour of the relative comfort of the status quo ?

In BTCH I postulated as to why there had been such confusion, and collective blindness , or at least studied myopia, when climate change is an obvious reality. One of the core reasons is that the western politicians are part of an old declining system that by definition will be slow at recognising change. This is because systems in decline become strained and forced to cope with day to day existence, and at the same time they have less resources to create solutions to adapt to new paradigms. A clear case in point took place when I sat on a panel with the 79 year old Lord Lawson. Sadly , he epitomised this view by saying with great conviction that climate change was not real and that it’s advocates had cloaked  it with the characteristics of a new religion.

Whilst the old western world is slow to adapt to climate change, the initial response of  emerging countries was also to deny it in the race to develop western living standards. China is the first of these emerging countries that having recognised that its economic ascendancy is clear to all who are pondering the nature of the world they plan to inherit, and thus solutions to climate change are becoming more resonant amongst some of the population. A trend I would anticipate to continue.

Meanwhile, as if one needed more evidence to wake up to climate change, a new study has shown that the Antarctic ice melt is now at its highest level for 1000 years. This has been produced by the most extreme temperature shift anywhere in the world over the past 50 years of some 2.5 degrees (5 times the global average). It may have taken some 150 years for industrialisation to shift the region’s temperature to present levels, however with summer temperatures of zero degrees centigrade a tipping point has now been reached where even small changes in the very near future will have dramatic effect on ice melt and ultimately sea levels.

As if that is not enough to make people stand up and take note, the level of carbon dioxide in our atmosphere has now risen to 398.35 from the 392 levels when BTCH was published just over 2 years ago and  during 2013 will pass through the 400ppm barrier. The sobering thought is that even if we stopped our carbon emissions here and held the ppm level at around 400, the planet will still continue on its irreversible path to unrelenting warming , because Co2 levels and temperature are directly correlated  but with a time delay, and an exponential change function.

An interesting historical perspective was drawn to my attention that gives an outlook as to how long we have been polluting our atmosphere and the prevailing attitudes of the past. We might add that whilst both examples are in Germany, that we in no way consider that climate change to be solely caused by Germany!

The first concerned the all-powerful industrialist and erratic genius Alfred Krupp, whom from the 1870’s onwards became known as the Cannon King, armourer of the German Empire and much of Europe as well . When business went against him der Herr Chef headed for bed in the lea of his huge foundries in Essen . Living and breathing the foul and putrid smoke, entirely of his own making , he steadfastly believed that the atmosphere produced by living in the world’s largest iron and steel works had no deleterious effect at all on his health or that of his thousands of workers . He gave no thought at all to the wider ramifications of this incessant industrial discharge. A succession of specialists dispatched to the leviathan’s bedside ( by a concerned wife Bertha , who was concerned enough and shrewd enough to live with the children in Nice ! ) pronounced that Alfred must at once cut out cigar smoking, cut back on wine consumption and take ‘ plenty of fresh air ‘ , of which there was already little or none , by that time , in the heart of the Ruhr Valley . Alfred , possibly hypochondriacally insane , did not believe in oxygen , except as an essential agent in the smelting process . He was convinced that the scent of dung was more salubrious , and had it replaced ,fresh, on a regular basis . Despairing of his patient’s basic ignorance on the subject , and being himself much more accustomed to the agreeable fragrances of the Riveria, the learned doctor retreated , advising the hapless Alfred that he might be better consulting a veterinarian !

William Manchester warming to the same theme , in researching ‘The Arms Of Krupp’  hired a light aircraft  and observed as follows :- ‘ Flying over the Ruhr ( in the early 1960’s ) is like dodging traffic in a dense fog . On the sunniest day the visibility is less than a mile . The pall of smoke starts north of Cologne and rises ten thousand feet ; you can see it boiling up from the forest of chimneys below : black smoke , red smoke , yellow , white and orange smoke , blending into an immense greasy overcast as the toiling chefs below season and spice their entrees of liquid metal.’

The big question we should ask ourselves is; Will our own grandchildren forgive us our ignorance and for behaving collectively like Alfred ?