The Day the Pandemic Cool Aide Ran Out 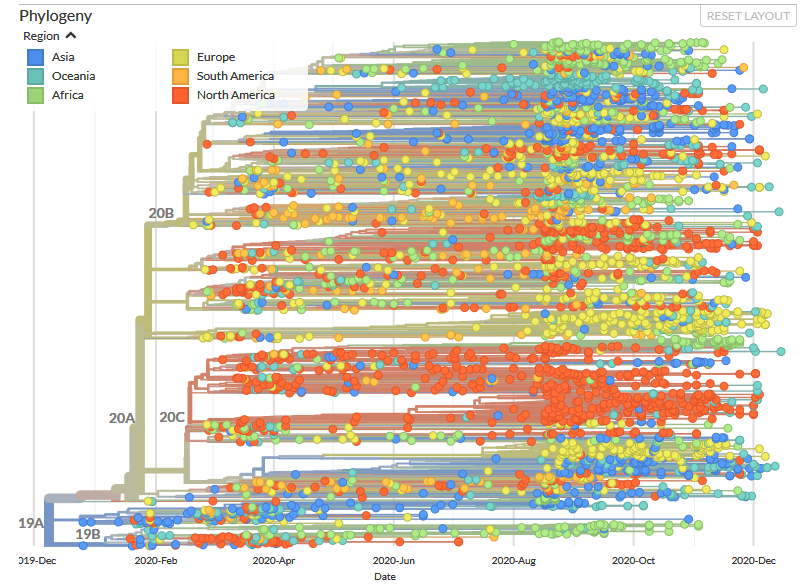 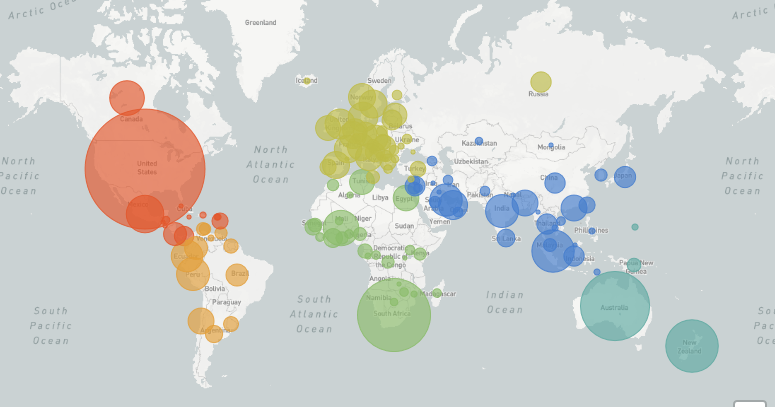 The above images show the mutational development and spread of the virus to date. Note how many mutations there have been so far with only 1% of the worlds population infected.

The cancellation of Christmas over the weekend was a key moment for both the UK and the world. It brought to light the fact that whilst a vaccine is being  mobilised, we are still a long way away from ending the pandemic.

Global Forecaster uses collective psychology and predictive algorithms to anticipate the future. Most of these predictions are often at odds with the general perception of said future. This means that more often then not Global Forecaster’s view will be in opposition to mass perception at the peak of its mood swing.

In the case of Brexit, whilst many believe a no deal is bad news, Global Forecaster’s models continue to suggest it is a positive outcome for Britain. It will allow Britain to shake off the shackles of the EU and forge its own most path forward in a rapidly shifting geopolitical world, a pandemic-ridden world where swift adaptation will be an advantage over protectionism.

Our March 2020 pessimistic predictions on the course of the pandemic, have far has proven accurate with the expectation of several waves over the course of 12-18 months before a vaccine could make a significant impact. Importantly, I highlighted the risk of the evolution and spread of significant mutations in this RNA virus. When  everyone was euphoric and oozing with hope in what I described as the 'Apex of Hope' over the introduction of the vaccine, as the markets went into a buying frenzy. The commentary was as below.

The Crisis of the Pandemic

The announcement of new and effective vaccines coming online has provided the markets with great hope. It is important to bear in mind, however, that until we reach the point of herd immunity, either naturally or via an effective vaccine, the current secondary wave will accelerate and we risk tertiary waves as well. By administering this vaccine to the vulnerable, the death rates can be reduced. It will not arrive with sufficient mass in time to change the course of this current second wave, meaning the economic damage will continue unabated. The major concern, as I highlighted in March, is the RNA nature of the virus. This means the greater the number of infections, the greater the number of mutations. As we have seen in Denmark, the human-mink transmission cycle has produced a major mutation the authorities are desperate to contain. Pandora's mutation box has been opened and although we think the new vaccines will get the pandemic under control, there is plenty of evidence to the contrary.

The New UK Variant and the Associated Political Games

In line with my above view on mutation rates increasing and in addition to the Denmark mink mutation, a new variant has taken hold in the UK. This mutation is said to be 70% more transmissible which increases the R number by 0.7. I am, however, very sceptical about the accuracy of the new R number as it is based on back modelling of the data on spread rates and most of these models are widely inaccurate! Simultaneously, this variant is showing signs that it has some marginal changes around the S Spike protein, but thankfully not enough to prevent the current vaccines in production from working. This announcement was used by the government to justify cancelling Christmas and moving back to a national lockdown. Indeed, following the announcement over the weekend, the clamp-down on travel to and from the UK has been instantaneous. It is a portent of the lockdowns to come across Europe and the world in the next phase of this global pandemic. If the Witty Valence nightmare story is to believed, England has hit a pandemic brick wall. The question is, has has it really?

The Reality in the UK

The average death rate for the 4th of December shows it is 20% above the five year average death rate for this time of year (i.e 2000 per week  above the roughly 10,000 average per week at this time of the year). Whilst this is undesirable it is  hardly a nation-ending event in a country with a population of 62 million and especially when it is focussed on the oldest sector of society. Furthermore 2000 per week is a fraction of the excess deaths seen in the first wave especially compared to the number of infected. This is mainly because the older sector of society has been protected and treatment protocols have vastly improved. That is not to say that these figures will get worse as we go through the winter, as sadly that seems ineviable.However something else is afoot here.

Britain has some 45% of the worlds total genomic testing capability. It should be no surprise that Britain picked up the presence of this new mutation faster than other nations and indeed has been monitoring its spread since September. However, it does not seem to have originated in the UK, but has more probably spread from Europe to the UK via the channel transport corridor. The news flow so far around this variant has been wildly inaccurate. Much more critically, the focus on mutations has awoken the world to the next phase of the pandemics mutational dynamics and the uncertainties ahead. 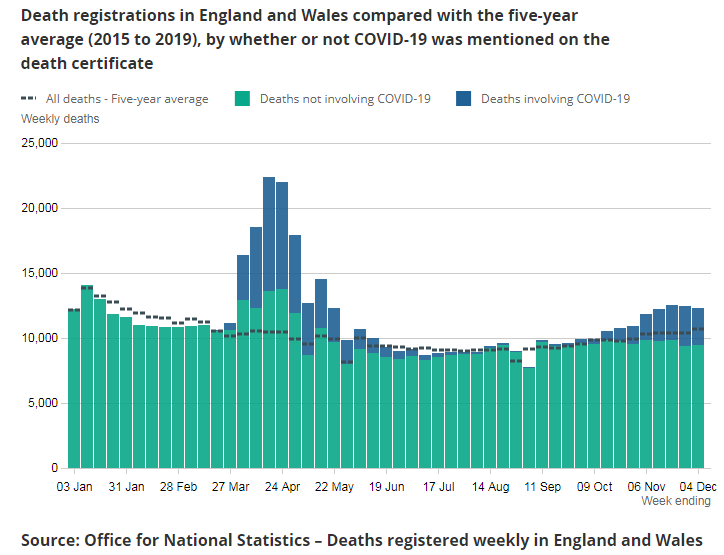 I suspect there is a great deal of politics behind the facade of the announcement of this new variant, driven by the agenda of  the lockdown brigade led by the great puppet master Gove and supported by the rather unscientific Sage battalions. The variant story was the big stick required to beat Boris into sending the nation back into a full lockdown to save the NHS and avoid mass deaths. It has  provided further justification for the  application of the broad based lockdown dogma, applied with maximum zeal. This is a model that would work well if we did not need a functioning economy. However, applied for a third time (for what looks like the next four months into April) it will send Britain and any other nation following this course of action into a full-blown economic depression.

What Better Strategy Could the UK Use?

I would argue that if Global Forecaster's predictions outlined in March has been applied, the outcome of this pandemic would have been very different.

The SAGE thought process seems set a course driven by the fear that the  numbers of infected will increase exponentially and then saturate the health services' limited number of ICU beds, therefore increasing mortality rates. Due to the failure of the government to increase the number of ICU beds both in the NHS and Nightingale hospitals, it seems inevitable that from now on we will see the UK government impose increasingly Draconian lockdowns including police road blocks, that they will argue are the only way to stop the accelerated spread of the virus. With the current SAGE mindset, this means the UK will be in almost total lockdown through to April 2021. When we emerge it will be into a full economic depression.

How Long Until the World Returns to Normal?

The reality is that with 77 million recorded infections out of 7.2  billion humans on the planet, we have only seen 1% of the global population infected. Furthermore, the acceleration in the infection rate means the numbers of infected should be expected to rise exponentially. This in turn potentially risks more significant mutations that are more transmissible or lethal.

This is a frightening prospect indeed and it's implications are very concerning as the developed world is now in a race to reach heard immunity before any more dangerous variants appear. As such, it is the next 3-6 months ahead that will be the most potentially dangerous. As the number of infected increase along with the potential for new mutations, the vaccines risk invalidation. Thus we should expect to see the most extreme of lockdowns before vaccinations become widespread. During this period the economic damage will be exacerbated to breaking point for the private sector as government debt becomes unsustainable. I foresee a deep economic depression and pandemic crisis in Q1 and Q2 next year, one so potentially deep that governments will no longer be able to cushion the economic damage and they themselves start to become victim via currency and debt crisis.

Looking further ahead, the good news is that there will be a  time when Western nations have created heard immunity using the available vaccines. On the optimistic side, this will be in Autumn 2021. This is if no new serious mutations appear, that use other protein Spikes (other than the S Spike) to access human cells, which would invalidate the current vaccines. On the pessimistic side, it might be as long as the summer of 2022 before we return to some kind of normality in the UK and Europe if as is inevitable that many more significant mutations will appear as more people are infected.

Either way, it seems inevitable that the emerging nations will become increasingly isolated from the developed world as the pandemic rages. With their large populations, the emerging nations will become a petri dish for new mutations that could then ricochet back into the developed world. Consequently the return to any kind of pre-Covid global normality is, I fear, many years away. Thus we are in a long war , not a relatively short and sharp one as politicians believe we are in.As a consequence lockdowns that severely constrict and destroy economies at the current rate, are not a viable policy option. As by the time the pandemic has passed the depths of the economic depression induced will make the 1930s in America look tame.