The deadly dance of the Eagle and the Dragon: Part 2 America and its' three false dawns 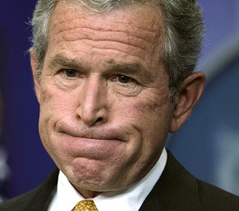 Since 2001 and 9/11, America’s three presidents have all contributed to America's decline in their own inimitable ways. In this America has conformed to the characteristics of this phase of decline outlined in the five stages of Empire. Each of the last three Presidents lost a specific element vital to the composite of American power in what we will call the three false dawns.

The First False dawn: The loss of the Eagles moral imperative to rule

The First President of the declining phase, Bush Junior, lost America’s moral imperative, whilst following the advice of Dick Cheney and Donald Rumsfeld. This was following 9/11 when he became subject to the neoconservative agenda of expansion. The fear of further Islamic terrorist attacks was harnessed and used to drive the imperative to pre-emptively invade the perceived strongholds of America’s three main protagonists: Iraq, North Korea, and Iran. However, although the neocon agenda had expansive aspirations to make the world American, it was but hubris. In reality the national energy of America was in decline and thus at its weakest since America’s inception and as such was unable to rise to the aspiration. This was therefore the false dawn of American influence. Fear eroded the moral imperative of America and made America into the very nation that prior to 9/11 the Jihadists had claimed it was. Critical to the success of all empires is its moral imperative, or the right to rule through self-perceived superior moral values. In the case of America those values were severely eroded by Guantanamo Bay and a program of rendition, state torture, and kill and capture missions in Iraq and Afghanistan. Those missions may have killed and captured many of their targets, but an unintended consequence was that many more individuals were turned into dedicated enemies who joined the America resistance movement. The result was an America exhausted by a long asymmetric conflict with the radical Islamic world. The Islamic world was in late regionalisation and due to its demographics had time on its side. This misdirected application of force by America critically distracted and weakened it from the real threat to America's hegemony, the rise of China.

Next came the smooth-talking but highly narcissistic, and consequently destructive, presidency of Barack Obama.

Whilst the world celebrated a new hope that America had entered a golden age with the arrival of its first black president this was, in reality, the second false dawn. BTCH took a view contrary to the popular one based on the five stages of empire model. The social algorithm noted that in the phase of over extension, the underclass will have carried on having multiple children, as compared to the relatively secure and wealthy over class with lower mortality rates. The consequential shift in demographic ratios then facilitates the election of a member of the underclass to ultimate power. There is always great hope at this stage that things will be different. In reality the focus of policy is inevitably social equality and integration, at the expense of the foreign policies that have maintained the boundaries and influence of the empire. The result is that the empire goes into rapid decline.

In addition to the above process, further damage to American power resulted from Obama’s narcissistic behaviour. This was unrecognized and unrestrained, allowing him to do maximum damage to the American influence. BTCH predicted that after two terms Obama would go down as one of the worst Presidents in American history. The full truth of this has yet to be recognised.

BTCH dubbed Obama's term in office as “the great power giveaway”, in which America ceded power across the globe to its main challengers. A prime example was when it precipitously and prematurely pulled out of its middle eastern military commitments that had already cost significant blood and treasure, leaving a vacuum into which ISIS sprouted and cast its long shadow, and into which Russia then jumped to assert authority. As a by-product of the chemical red line in Syria and Putin's challenging letter to Obama in the New York Times, it was Obama who authorized and prompted the revolution against Russion sympathetic rule in Ukraine as a revenge action. This failed to recognize the strategic importance of Ukraine as the USSR's and now Russia’s vulnerable underbelly. The consequence was that Obama forced Russia away from the West and into an alliance with China. This was a terrible outcome for the West and the biggest strategic blunder in modern history. The consequences of this action will greatly affect the outcome of the next decade.

Meanwhile, Obama allowed China to encroach and expand its influence across the globe by the application of its economic power (debt colonialism) without any balancing challenge from America. By the end of Obama's 8-year term, America was a sinking empire of constricting global influence. The unipolar world had clearly given way to a multi-polar world with new, potentially very dangerous, strategic competitors (on their way to becoming future enemies) emboldened by Obama’s week foreign policy. Foremost of these is China. The situation is similar to the time when Germany in the run up to WW1 saw Britain as weak and decaying, and thus ripe to be challenged.

The Third False dawn: The loss of national cohesion

Thus the stage was set for Trump with his promise to make America great again and so reverse the Obama giveaway. A sentiment that resonated with a population who recognized just how far their great nation of the Eagle had fallen from absolute power in the world.

It must be noted that the declining phase of an empire or any system, is exacerbated by the rigidity of the political system and governing institutions that allows great right- brained leaders to rise to the fore. The choice of Clinton or Trump exemplified America's point on the decline curve. Both were wholly unsuitable Presidential candidates when compared to the majority of Presidents before them, where service and integrity was a key driver rather than self-interest. It is interesting to note that empires in decline have switched from the embedded cultural value of service to the empire, to one where individuals and leaders are more likely to seek to serve themselves. Hence the rise in narcissistic leadership from the top down, which unpicks the fabric of collective endeavour of a society. Americans should not feel singled out. When in decline Britain had its own narcissistic leaders, foremost of which was the wartime leader Lloyd George who took office in 1915. His divisive behaviour to suit his own ends, even when Britain was sorely pressed by Germany, make Trump's misdemeanours seem minor. A full appraisal of his office is given in Lions led by Lions

Notably whilst Obama was an unrecognised and therefore unconstrained narcissistic leader, Trump was quickly identified as such and the political system has sought to contain his worst characteristics. As long as this institutional restraining action continues to mitigate some of the worst decisions, it is possible that Trump's leadership could actually be the best possible available option to lead the American fight back against China. Trump will be perceived by China and Russia as unpredictable, determined and aggressive in any kind of conflict. These are the perfect qualities of intent in deterrence for a nation that is no longer at the top of its game. This is especially true for the West at a time when it is perceived as being weak and thus vulnerable to predatory aggression from Russia and China.

Returning to the negative aspects of Trumps leadership style. The already fractious American national energy has been exacerbated by Trumps abrasive narcissistic personality. Trump seems to be the very opposite of a regal, emotionally stable and well-judged president. The last election proved to be the “devils choice” for America. On the one hand a clearly dishonest and entitled Clinton, or on the other a maverick and offensive President who espouses the right policies to allow America to face China and delay its rise over the next decade. With such a divisive self- oriented energy leading the nation, it is no surprise that American Politics became highly divisive. This division exists between parties, and within parties, which represents a critical loss of national cohesion. However the divisive energy within America today, is not caused by Trump. It is rather a fundamental characteristic of decline. Trump may further catalyze this divisive energy, but it's important to note that it is actually innate energy within the system at this stage of its cycle.

Regrettably the Trump presidency can best be typified by a state of national divisiveness. A lack of national cohesion is the very dynamic that in the past has brought down every great empire in history; empires crumble due to pressures from within. Empires are inevitably consumed by discourse which allows challenging powers to gain significant traction. Whilst everything about Trump is divisive, on the positive side he is enacting the core strategy that America needs to challenge China and slow down its expansion before it is too late to contain. However, so far Trump’s style of leadership has emphasized the divides, rather than uniting the people to face the common and much greater clear and present danger of China. For America the decline is inevitable and time is not on its side, so political weakness is dangerous. In contrast China has time on its side. This time advantage allows China to out wait America. The only limitation is the rise of India, which is at least 20 years behind China.

On the potentially positive side, if Trump can heal national divides and unite against the common threat of China, then in all probability he will become a two-term President. The alternative is a democratic President with an agenda that would be far more Liberal and give free rein to China’s expansion and challenge. The reality is that Trump is America and the West’s best hope for a peaceful transition of power over the next decades with China. Failure could quite literally spell the end of our human race. It therefore behoves us all, from a sense of realism, to support Trump as the best hope for western security over the next decade.

Lastly one more indulgence. It is ironic that during the phase of decline, a nation like America finds itself beset with huge challenges, and yet the rigidity of the political system prevents a truly great leader from rising to power and enacting a strategy that optimizes the limited resources to create the most constructive outcome. Imagine how America would look if President Xi took the reins of power? I would venture to say it would be in a much healthier state with a slower more cohesive decline as he is a great leader with vision.  Conversely, if Trump ruled China, its national momentum would still carry it to greatness despite Trump's failings as a leader.