The End of The Road For The US Debt Driven Economy 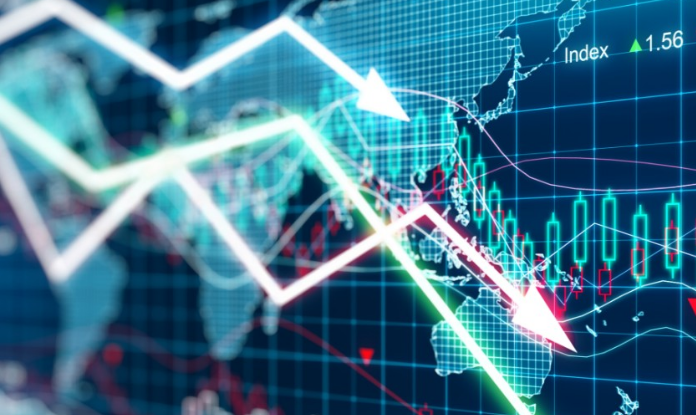 In our previous Murrination we examined the collapse of the Doomsday Bubble, which as been created by the excess levels of debt. In this Murrination we look at how the accumulation of that debt burden, forces up Interest rates in the Bond markets and then collapses the Bubble. To understand this situation better, we need to examine the history of US 10 year rates more closely.

The 200 year chart of US 10-year T-yield rates shown below, places today's low rates within the realm of an extreme whilst showing that the decline in rates since 2016 looks to be the final 5th wave in the sequence since 1981.Further details of that decline are shown in the second chart below. Critically a  break above 2% and the long term down trend, will trigger major alarm bells in the bond and equity markets. Note also that as per Arkent-Signals From Volatility Pricing we have been advocating being very long on Bond volatility since the start of the year, at these super cheap levels. 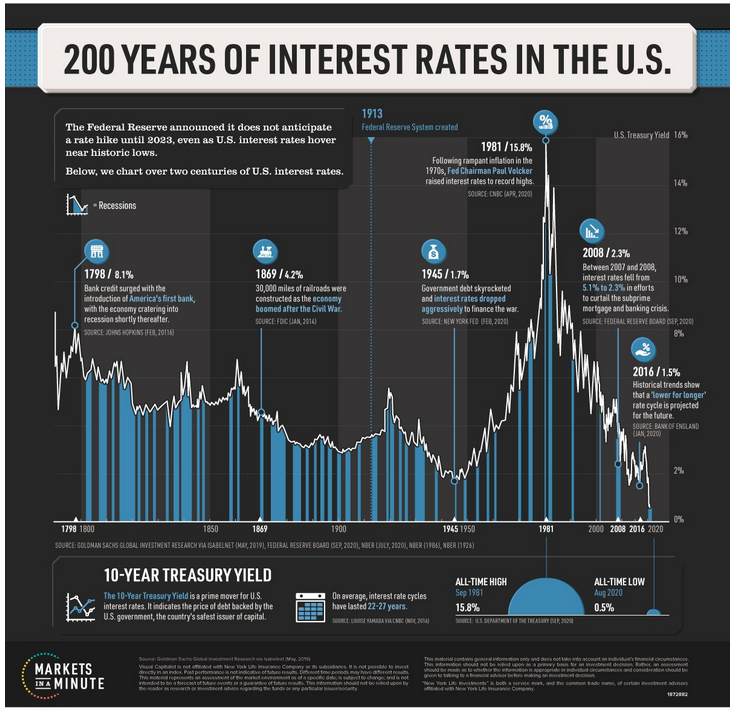 America is in the final stage of decline, based on our five phases of Empire. Consistent with that phase of the cycle America has been using debt to maintain its economic status as the global hegemony. The below chart was published in Breaking the Code of History in 2009. Since then as expected US National debt has climbed to levels unimaginable only a decade ago (3x). However without a cousin empire with similar values to pass the baton of global hegemony too (as Britain had to America), America has only had one option. To increase its debt levels to the point of a finical  explosion. 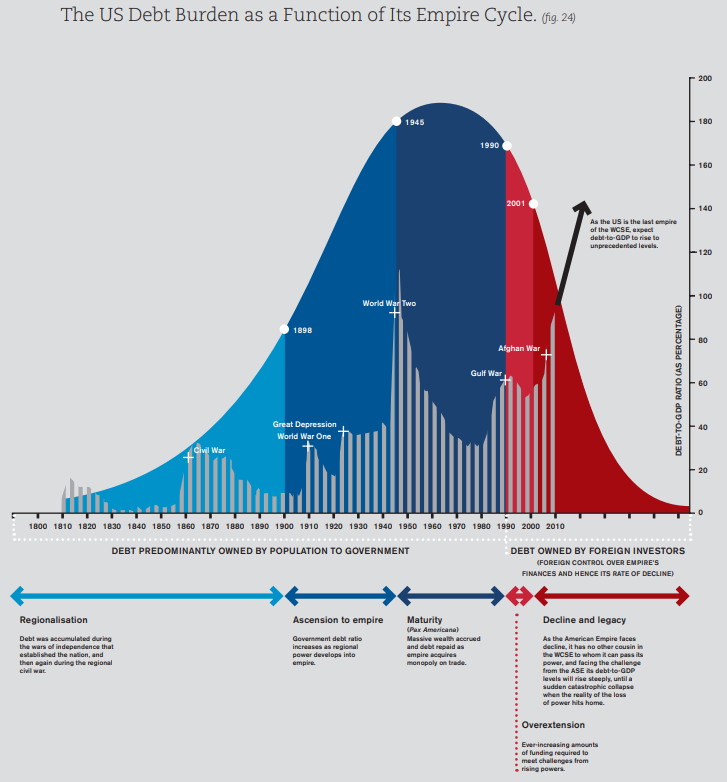 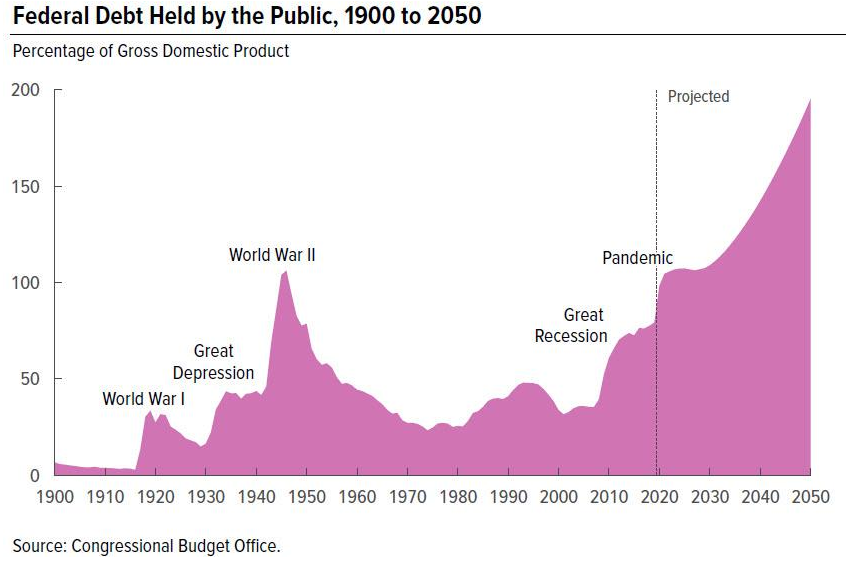 However, as the chart below shows, if the debt had been productive, the debt to GDP ratio would be declining and not increasing. Thus, whilst the debt fuelled economy has delayed the process of US decline, the process of economic decline has nonetheless been unfolding for the past 20 years, each one of which has been cumulative. The two charts below show this process very clearly. 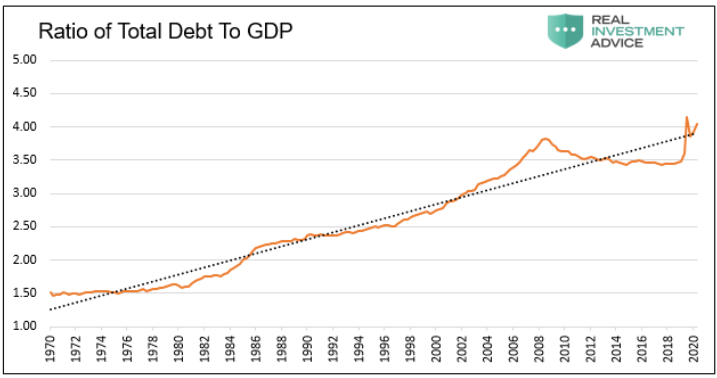 The ratio of lower interest rates correlating with lower growth suggests that the US economy, even with lower rates, has not been stimulated to be competitive. 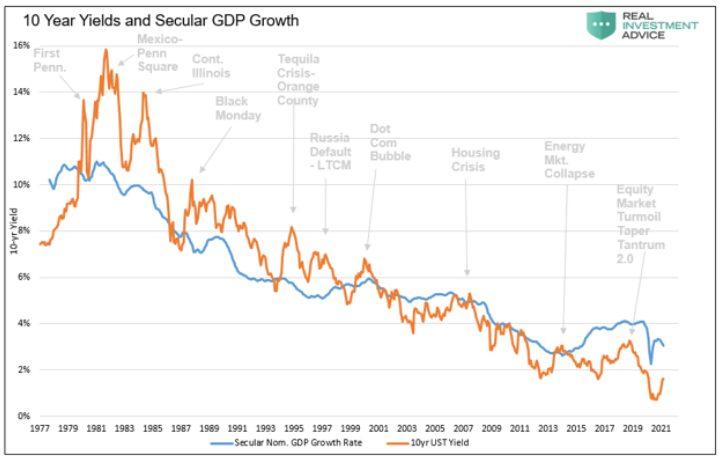 The chart below is interesting as it shows the sequence of financial crises overlain on the decline in yields. This clearly demonstrates that the reflex response has been to buy debt as a perceived safe haven, as long term underlying growth slows down to almost zero. Interestingly this makes sense as the Fed and US Government have encouraged this debt fuel growth, but also that each crisis made the US weaker and thus lowered its underlying real growth, with a lower associated inflation rate. This then allowed the US government to increase the debt leverage ratio and appear to keep the GDP on a rising curve. I.e. what was once a 0.5% un-leveraged GDP growth could be debt leveraged 4 x to get to 2%, but further along the time curve a 0.2% un-leveraged growth rate would need to be debt leveraged 10x to get to 2%.

Until 2017 and the first Taper Tantrum, all US crises resulted in steps lower in yield. As such in all probability, that having reached the limit of the debt fuelled US economy cycle, the current crisis will follow the same pattern. That increasing rates are the cause of the crisis, because in effect the US economy is bankrupt and they have been called out by China, as the challenging hegemony. 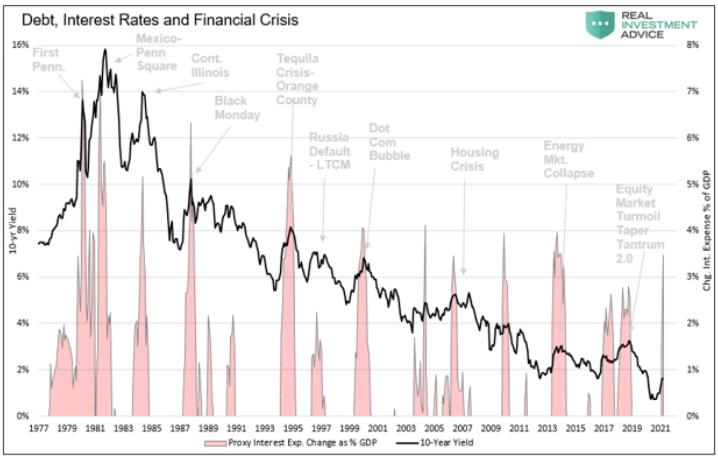 The size of the fiscal spend in Biden’s COVID 19 package has, we believe, tipped the delicate balance of the future of the US Bond markets. The price signal of this shift came with the move above 1.30% on the US 10-year rate which all but rules out the chance of a new low in a risk-off move when equities start to fall precipitously. Instead, we are now in the scenario in which bond prices will decline in phase with equity declines, making portfolio protection and diversification all but impossible. Whilst input inflation is expected to abate as the equity markets fall and demand confidence shrinks.

We expect input inflation to recommence later this year in an irrevocable increase as the commodity cycle takes off again. Thus from now going forward, we expect to see an increase in real rates as default fears grow. The ultimate consequence will in all probability be 5 years of stagflation, with negative real growth.