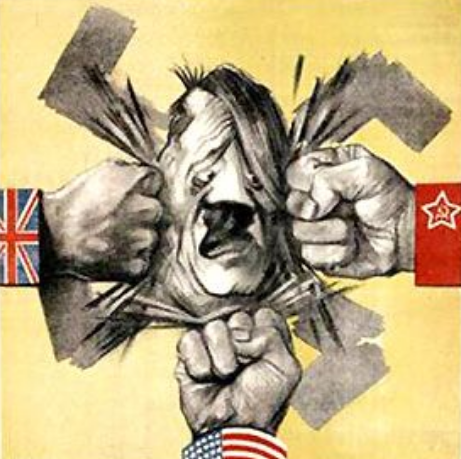 2.0 America and Russia in WW2. This relationship was driven by Roosevelt’s naivety concerning Stalin's expansive intentions for communist Russia. All he could see was that the British Empire had had its time and that Russia needed to keep fighting Germany, to expedited the end of the war and reduce American casualties. To do that he was prepared to arm and support the Russia, with whatever was needed. Especially concerning the motorisation of its vast army.Thus freeing Russian factories to make Russian weapons en mass, such as tanks and artillery. In expediting Russian victory at arms, Roosevelt ignored all Churchill's warnings as to Stalin's ambitions to become the dominant nation in Europe and ultimately the world.

However a more rational and nuanced strategy, would have been for America to provide enough weapons to keep the Russian army on the eastern front alive and fighting, drawing in German forces. But not to excess, as happened, which ultimately gave Russia the most powerful army the world had ever seen.The 430,000 US trucks and jeeps provided under Lend-Lease constituted the bulk of Soviet motorized capabilities of the Red Army conferring great mobility and integrity of the Soviet supply lines to the front lines.

Although a strategy of lessened US support to Russia would have increased the risk of the outcome of the Normandy landings. A better balance could have been struck after June 1944 by decreasing supplies to Russia. Indeed if it had not been for the demonstration of American atomic bombs, using no less than two such weapons on Japan to show Stalin that it was not a fluke. In all probability, the Russian army would have carried on and fought the allied armies for Europe. A campaign, that the Russian army with its mass and capability would have almost certainly won. Thus it was that the Russia and the cold war, was a Nemesis that America helped create, along with the potential for the destruction of mankind and the effective continuation of WW2 in another form until 1990 and the collapse of the USSR.

Part 3 America and Russia in WW2