The Falklands War – Will We Ever Learn? 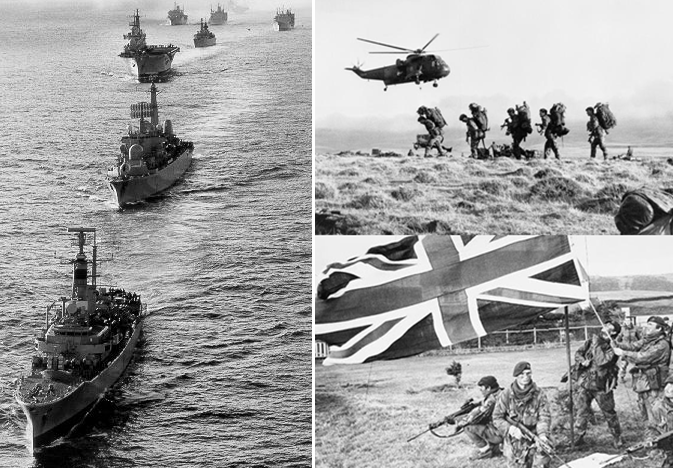 1.0 Remembrance Is Not Enough!

Our Beyond Remembrance series on wars only a few months ago highlighted that it is not enough to just remember, rather we have to learn from and commit ourselves to use those lessons to prevent the next war. Today, we in Britain and the West are failing in this vital task, accelerating the next war which is now rushing towards us.

Forty years ago, on 2nd April, the Falklands War commenced when Argentina invaded and occupied the Falkland Islands, followed by the invasion of South Georgia the next day. Some 874 men died and 2,400 were wounded over the 74-day war that followed. Whilst Britain, through bold and determined action, won the war, very few still realise that what was at stake was far more than the island people’s future or the pride of the fallen British Empire seeking to rebuild its self-respect. The war held the fate of the Cold War in its hands as to whether it ended peacefully or with a hot war that would destroy Europe. As defined by our Theory of Warfare, the Falklands War was a pilot war.

2.0 The Theory Of Pilot Wars

Pilot wars are apparently minor confrontations that take place at the periphery of an empire’s sphere of influence. Very often they represent either a regional attempt to break away from the larger empire in order to gain independence, or a bid by a neighbouring state to seize territory from what is perceived to be a declining empire.

Pilot wars tend to occur in periods of overextension and decline. Although at the time they do not appear to be a major challenge, they are in fact of critical importance to the world’s perception of the failing empire. How a minor, peripheral war is conducted allows potential aggressors to assess their chances in a direct challenge.

Democracies that are the product of a mature and declining empire are particularly prone to be misunderstood and are sometimes viewed by dictatorships as soft targets, which are weak and unwilling to act in defence of their assets. In reality, they are slow to engage in combat but resolute in their purpose once at war. This error of judgement was made by Germany in 1914 and 1939, and by Japan in 1941, and it was a common belief in the Kremlin for most of the Cold War.

The significance of pilot wars can be seen in two key examples. The first is the Second Anglo-Boer War (1899–1902), in which a small group of Boer guerrillas in South Africa held out to the British Empire. Britain’s failure to act decisively encouraged Germany’s belief that it could mount a challenge to this established imperial power. A second example was Germany’s contravention of the Versailles Treaty in 1936, when it marched its soldiers back into the demilitarised zone. This was an action that the treaty clearly stated would be interpreted as an act of war, but it was met with British and French passivity. Hitler was emboldened by the lack of response. Four months later, he supported the Franco faction in the spread of fascism in Spain and continued with Germany’s own expansionary policies, which led to World War 2.

Pilot wars are a test of an empire’s intention, national vigour and military capability, and shortcomings in any of these areas can encourage a predatory empire or regime to aspire to dominance. Strategically, it is preferable to fight a pilot war properly – for example, to respond to a low-threshold challenge such as Hitler marching into the Rhineland – than to fight the all-out war that will inevitably follow.

3.0 The Falklands: The Pilot War Was The End Of The Cold War

The Falklands was definitely a pilot war. Whilst Britain was at the low point of its empire cycle after the loss of the British Empire, it was part of the larger Western Christian Super Empire that was locked in a cold war with the USSR. Indeed, it was a cornerstone of NATO with its ability to launch nuclear weapons. Thus, a test of Britain’s (and Thatcher's) intention to defend itself was integral to the USSR’s perception of the strengths and weakness of NATO if they chose to attack. Thanks to victory, the Kremlin had to drastically alter its evaluation that the Western nations of Europe were too politically weak to defend themselves and it was just a matter of time before they attacked when the opportunity presented itself. However, post the Falkland’s victory and increasingly so as Regan’s new technologies started to be deployed, the option to use conflict as the economy of the USSR collapse was ruled out, resulting in the peaceful end to the Cold War. Where the leaders of the USSR had once mocked Thatcher as the ‘Iron Lady’, after the Falklands victory, they weren’t joking. Unlike the Argentine junta, in which they lived to regret their misreading of British resolve to defend the rights of the islanders and the rule of law, they were not going to make the same mistake. 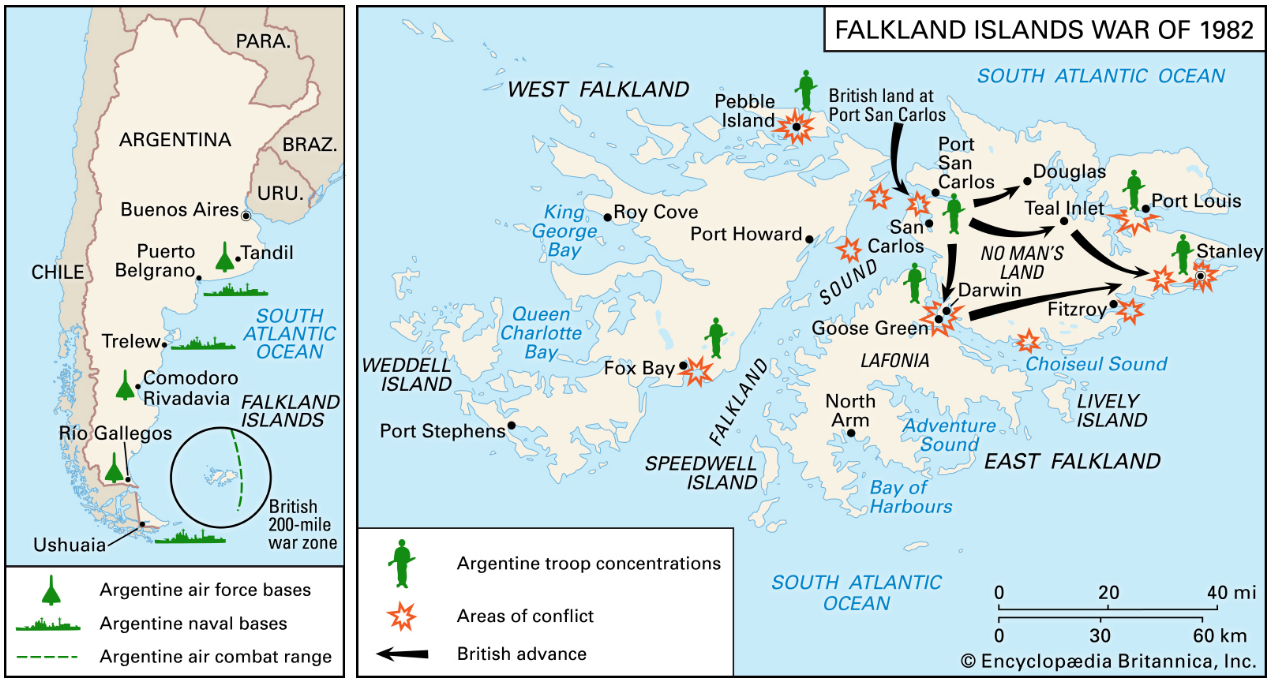 In 2002, I had the great privilege to sit at the high table with Margaret Thatcher and her generals and admirals to celebrate the 20th anniversary of the war. I sat next to General Pike and articulated that he and his comrades had saved the world from WW3 by their actions. His response was one of surprise, as he had never thought of the conflict in those terms. Today, that perspective is more widely recognised. Yet Britain, and especially our political leaders, seems to have forgotten the lessons from the war, so now would be a good time to remind ourselves of those three key lessons.

Britain’s failure to enact an effective deterrence strategy, which caused the Falklands War, was a combination of two key events. Firstly, Britain was at the bottom of the cycle post the loss of its empire and, in the erroneous 1981 defence paper, was in the process of shrinking the Royal Navy, including many of the key units that fought to recover the islands. If the invasion by the Argentines had happened a year later, Britain could never have recaptured them. Simultaneously, the defence cuts included the withdrawal of HMS Endurance, the ice patrol ship that operated around the Falklands, so signalling the end of the presence of the Royal Navy as a commitment to defend the islands. This was perceived as a weakness by the Argentine military junta. At the same time, they sought a distraction to their economic woes.

Make no mistake, the Falklands War was a function of Britain’s failure to invest in its armed forces to create sufficient deterrence to the invasion.

Losses are inevitable in combat and so forces require mass and depth to maintain combat operations. Today, the Royal Navy is so small that its combat effectiveness could be destroyed in a matter of hours, especially as it lacks any effective long-range ship-to-ship missiles, and will do for years to come, thanks to a grievous mistake by the Admiralty procurement process.

In the case of the Falklands, victory reinforced the maintenance of the Cold War peace. However, in the case of the cumulative effect of failures in Iraq and Afghanistan, and the disastrous route from Kabul, such a failed pilot war will only encourage aggression in the form of opportunism, such as Putin’s, and aggression that derives from the systematic expansive state of a nation like China.

The key lesson is that, having lost a pilot war, the only rational response is to raise levels of defence spending. Otherwise, another more significant war will inevitably follow, like the one pending in Ukraine and the invasion of Taiwan.

3.4 The Royal Navy Is Our First Line Of Defence

HMS Bristol, a Type 82 Destroyer, in resupply operations with a Chinook helicopter off the Falklands.

The victory in the Falklands could only take place because we had a navy to provide the platform from which to retake the islands. As a global maritime nation, our key strategy has been to hold our enemies well away from our island shores and to maintain the global trade routes that are our lifeblood.

Today, the Royal Navy is way too small to be commensurate with our new national interests as Global Britain. This is even more a concern as one of our main enemies is China and we need to contain its ambitions, which requires operations thousands of miles from home bases. 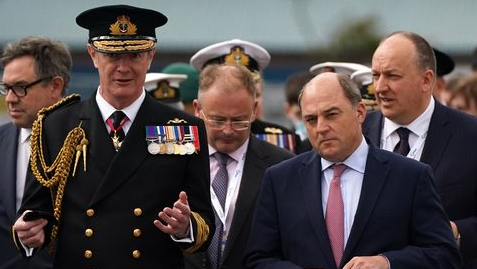 Second Sea Lord Vice-Admiral Nick Hine deep in conversation with the Minister of Defence, who certainly has not learned the lessons of the Falklands War!

Whilst expanding the Royal Navy is now a matter of national urgency, the retiring Second Sea Lord Vice-Admiral Nick Hine highlighted another national weakness. Hind is a big fan of the revolution enacted by First Sea Lord Jacky Fisher in the time of the dreadnought revolution, integrating quantum changes to war-fighting technology and tactics at sea running up to 1914. Correctly, Hind recognises that a similar navel revolution needs to urgently take place today, but the appetite and vision for such a change is not present in its current leadership.

Hind is so concerned that he made the unusual statement that the Royal Navy must transform: “Please understand that the need for, and the value of, change is not a fantasy – if we don't transform, we will fail and we will lose.” By ‘lose’, it’s obvious that we will lose to Russia and China who are revolutionising their warship designs and capabilities to totally outclass our Royal Navy and indeed any navy in the nation’s Western fleets.

Notably, the Falklands War is the most-studied campaign in the PLAN officer training programme, because they understand the significance of the campaign and also due to its similarities with their planned campaign against Taiwan!

The bottom line is this: remember the Falklands War, learn the lessons and increase defence spending to 5% of GDP and incorporate the radical revolutions of military affairs now underway. To not do so endangers the very existence of our nation and the Western world. 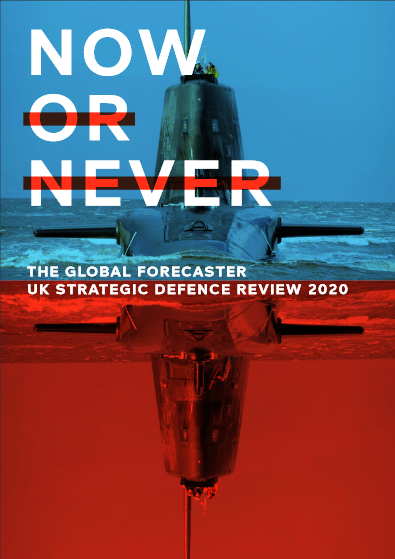 02 April 2022  40 years on from the Falklands: ‘The deadliest day could have been avoided – it still haunts me now’