The inevitable logic of the Greeks 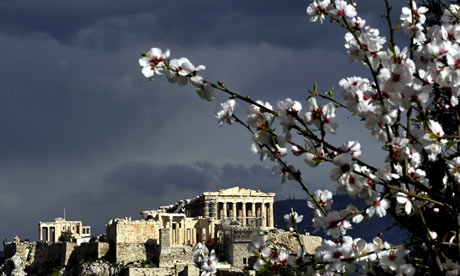 Greece joined the EU believing they were becoming part of something larger that would provide an economic advantage to their nation, in return for giving up key elements of sovereignty.

As we have discussed many times before, without a demographic engine to power Europe to expand, combined with its bureaucracy and inflexibility Europe has been moribund. Greece, as an EU country has been the worst hit since 2008 and has been taking the prescribed medicine of austerity for over five years without effect. Indeed, the Greek debt mountain has only grown. Paraphrasing Einstein’s definition of insanity: “doing the same thing over and over again and expecting different results”.

In our view, it is entirely logical that the Greeks voted in a socialist government as they promised another course of action, and it is reasonable to expect that the Greeks will choose not to pay their outstanding debt as it is just too large a milestone around their necks. After all, that is the same logic that takes many individuals into bankruptcy, short term pain for long term hope. Balanced against that logic is the collective fear of being rejected from the larger group of the EU. Despite the strong willingness on the part of the Greek people to keep on the path of austerity they realised that staying as part of the EU would only mean an eventual financial brick wall and the only option was to leave and take their chances. Such a choice is not, as some commentators have said a suicidal course of action, but rather a survival choice versus one of a guaranteed on-going Greek depression. Lined up behind Greece are obvious nations like Italy, Portugal, Spain and France who are only a breath away from the situation facing Greece.

The paradigm of Greece is really the personification of the Western world which is carrying a debt burden so big that it has closed its eyes and only focussed upon whether it is meeting its interest payments, not repaying its principal. Even stronger economies such as Britain and Germany still have more debt than they will ever pay off, and the latter is entering phase of demographic contraction in the decades ahead that will effectively reduce GDP, increasing Germany’s vulnerability to an inevitable debt crisis. Only Britain stands apart from the EU in regard to a well-run economy with expanding demographics. Britain does however control its own currency which will provide considerable advantages as a safe haven in the years ahead. Meanwhile, it is almost impossible to see how the EU will survive the next two years in its current form, and before that point the Euro will continue to come under relentless pressure.

A good summary but I'm not so sure Britain is a 'well-run economy with expanding demographics'. A) Our debts are massive and expanding and B) our growing demographic is unskilled and in many areas not integrating or intending to integrate AT ALL...welfare, unemployment benefits and housing payments to some parts of Britain are ludicrous and simply paid for from taxes on the decreasing number of wealth generators, a good chunk of whom are utterly dependent on unsustainably low interest rates and printed money. Apart from that everything is rosy!