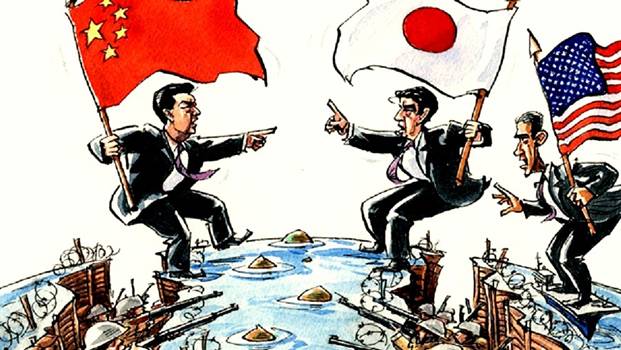 The challenge of the next decade is all too clear to a Student of History. On the one side are the groups or nations with expansive demographics such as the various nations and movements of the Middle East who are involved in the regional civil war to decide who will dominate the region. Once they have resolved their war, there can be no doubt that the resultant militarised society will then seek to project power outside of its borders into those of the Western World. Further up path of the cycle of empires is China whose population demands ever more resources , and who is in the process of extending its economic influence globally which will inevitably be followed by a growing military influence.

On the other side of this global strategic balance are the western nations in the mature and declining phases of their cycle who wish to protect that what they already control, but seem to have lost the leadership and collective intention to manifest a strong defence. They no longer demonstrate national resolve by their actions in the ever growing string of small proxy crisis, that have demonstrated to aggressors that the West is not resolved to defend its territory or its sphere of influence. Sadly, under his weak leadership, President Obama, when faced by a challenge, has consistently responded ineffectually by shying away from confrontation. Unfortunately, appeasers throughout history have a long track record of actually catalysing wars, rather than avoiding them. Prime recent examples are Syria’s use of chemical weapons despite crossing Obama’s red line and his refusal to use airstrikes in response. Chinese aggression in the South China Sea and dramatic cyber incursions including the Snowdon affair. Not to mention the rise of ISIS in the Middle East and failure to use airstrikes on ISIS in Syria.

Strangely, whilst the Middle East and China’s demographics and position on the empire cycle place them inevitably on a course of competition and potential conflict with the West, Russia in contrast is not innately expansive due to the limitations of its negative demographics. However, its natural resource wealth coupled with Putin’s aggressive and ambitious leadership, have made Russia opportunistic, as it seeks to expand its influence into the vacuums of American foreign policy. This means that the current conflict in Ukraine was not inevitable, but rather a consequence of a major miscalculation by Obama in his support of the Ukrainian revolution, (in an area outside the American sphere of influence) that backed Putin into a corner, from which he was inevitably going to come out punching. The situation has rapidly grown into a Russian/western proxy war in Ukraine, fed by Putin’s belief that, when he pushes, the West will not respond. However, the subsequent signals from Obama associated with his reticence to act militarily, even under the most justified circumstances, has allowed Putin to deploy Russian troops in Ukrainian territory to tip the balance of the civil war and to most probably win the outcome that he seeks. Unless Obama abandons his impersonation of Chamberlin, it is inevitable that East Ukraine will end up in Putin’s hands and the West’s credibility will be in tatters. Under the construct of “Breaking the Code of History” this conflict is catogrised as a failed pilot war, a small war that tests the intention and capability of the dominant power and a signal to challengers that they will have every chance of future success, which accelerates the onset of major conflict. Worst of all, the Ukrainian crisis has pushed Russia into an alliance with China which is the worst strategic outcome possible for the West.

The pattern of these events of western weakness is frighteningly clear. To avoid an increasing risk of large scale conflict, the West must choose to correct its downward path and rejuvenate itself by changing its poor leadership and finding a way to be economically strong. Otherwise it will not be able to afford to maintain a defence capable enough to deter the rising powers and to cope with real drivers and portents of war whilst they are at a level that is still containable. Conversely, if this does not happen soon the West will hand China, Russia and the Jihadists a free Darwinist option to seek to expand their territory and influence through aggression with frightful consequences.

If that becomes the case, the West will become just another empire who failed to understand the nature of war offered by the many lessons of history, of which WW1 was a prime example. These lessons start with the portents of war from young rising empires seeking to challenge to replace an old tired system. Without a robust response to early stage aggression, the aggressors will inevitably seek war, when they feel that they have the advantage. Worst of all for the West with its limited resources, if current trends continue, is that it will face multiple challenges simultaneously. If the West is to survive this onslaught, it needs leadership who have a true grasp of military history and large scale strategy. They then need to be able to implement that strategy thoughout its twist turns and inevitable reversals. We can only hope that such a leadership will manifest in the next elections in America, but we must brace ourselves for the continued aggression and damage to global stability before that point.

Understanding The Nature of How It Works

No doubt a demographic expanse is a major variable in understanding what is going on. However, let me bring back another concept from BTCH, that being the fractal nature of the empire itself. When this is added to the mix the nature of the empire is seen to be a composite of the ruling individuals within the population. As the youth demographic expands, the percentage composition of this ruling subgroup becomes younger as it changes. The empire is young and growing.

If the form of government is a democracy, then the ruling subgroup will be the most well connected well organized of all the different political subgroups within that empire. This can evolve over time to a totalitarian form when living conditions deteriorate as the internal power struggle for material wealth expands.

Violent behavior increases among the many subgroups competing for power. This competition increases within the empire over time as the size of its government increases and takes more of the productive wealth itself to function. This leaves less and less of the internally produced wealth for expanding the productive capabilities within the empire. Eventually money has to be borrowed from abroad to continue funding this unproductive expansion of government. The Empire at this point has gone over the top of its life cycle curve and is on its downward spiral towards its end.

Understanding the nature of how it works