The Never Never Defence Review; Part 2 Churchill Would Be Turning In His Grave 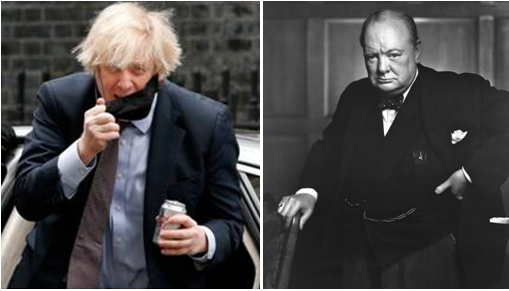 The wake up moment on the UK's defence policy last November in parliament by the PM was very much welcomed. During which Boris stated that “the defence of the realm must come first”. A bold statement delivered with intent and promise that Churchill would have approved of with every cell in his body. However, the reality of the recently released the Integrated Review and the Command Paper, is that they contain many key omissions that have weakened Britain's future security irrevocably. Much of the contentious information was pre-released in various kite-flying exercises that were the subject of our Murrination: Failure To Defend the Realm. Sadly, nearly all the kites that were flown have proven accurate. The consequence is that Boris who aspires to model himself on Churchill has shown himself to be anything but his modern incarnation. Alarmingly, he and  his Government have failed post-Brexit Britain at its critical Now Or Never Moment.

2.1 On the positive side of the balance sheet, the Big Picture Strategic Review does consolidate the PM’s shift in the Government's defence mindset, away from the past 30 years of consistently running down Britain's post-cold war capabilities. To one of the evaluating threats and attempting to create effective integrated solutions. Many of the recommendations concerning foreign policy, potential threats, forward deployments and potential allies are all very welcome. One essential tenant that was upheld is the importance of the Royal Navy, which is entirely commensurate with the return to a global maritime paradigm in which the navy is the prime arm of national power projection and protection in a post-Brexit world. However, the PM's promise to “restore Britain’s position as the foremost naval power in Europe” has a long way to go when faced with the threat of the Russian Navy today and the minuscule scale and time frame of the proposed shipbuilding program. Whilst the new spending program represents an increase of 10-15% on the current annual MOD budget of £41.5 billion and is the largest increase since the Cold War, there is currently an annual shortfall of around £2 billion in the existing Equipment Plan so this will only plug the hole and provide another £2 billion per year of ‘headroom’ for other things. However, the scene has been set to start to view defence spending as an investment and not a cost. with 10,000 new jobs that would be created each year, whilst £1.5 billion has been allocated for further defence research and development with likely future spin-off benefits into the civilian sector. The PM promised a “renaissance of British shipbuilding” that will provide jobs in Glasgow, Rosyth, Belfast, Appledore and Birkenhead. Something we advocated as “If there was one policy which strengthens the UK in every possible sense, it is building more ships for the Royal Navy.” The positive news was that the Defence Secretary, who also doubles as the ‘Shipbuilding Tsar’, announced that the UK National Shipbuilding Strategy will be refreshed and broadened to go beyond just the construction of hulls and include the complete supply chain. All government-owned vessels (over 150 tonnes) will be the subject of a 30-year procurement plan and their manufacture is likely to be restricted to predominantly UK companies.

2.2 However, on the negative side of the balance sheet, this report follows a long-held tradition of structuring forces for historical threats and wars, rather than anticipating them. Thus, the prime failure of the Review was to not correctly identify China and the magnitude and imminence of the threat it poses, which includes its growing political and military alliance with Russia. This is all the more surprising, as the new expansive policies of Global Britain have inevitably placed themselves in direct competition with China. From this major failure, many of the other key failures of the reports follow as a consequence, key being the amount of money we should be spending on defence as a percentage of GDP and the urgent need to escalate it to 5%. It was a positive thing to highlight the many revolutions in military technology that are unfolding today, but to then fail to spend enough to rapidly deploy that technology whilst remaining a current capability, was grossly negligent.

2.3 Planning for the last war, The inadequate planning demonstrated up to the last war has been repeated by UK governments for the last 30 years (and continues to be). In the form of slow and belated responses to threats, rather than anticipating them. The UK Government has been slow over the past 10 years to recognise Russia and its military resurgence, and is only finally doing so in this report. Similarly, the UK has been a decade too slow in recognising the grey zone tactics of Russia and China over the past two decades. Employing aggressive and invasive tactics, which have been used relentlessly, against the UK and the West to its detriment, whilst the West was distracted by the asymmetric Islamic terrorist threat that never really placed at risk its fundamental way of life. Thus, this responsive Defence Review focuses on a belated but much-needed grey zone countermeasures strategy. Yet in so doing, it completely missed the next real major threat from China: the mass deployment of high tech, kinetic warfare that harnesses Chinas global dominance in manufacturing. As such the UK government's report is well behind the threat reality Britain faces today, which has once again created an artificial sense of security when in reality our threats to national survival are worsening at an alarming rate.

2.4 A Defence Review that would have been appropriate in 2010 is today way behind the real threats posed in 2021, leaving Britain dangerously exposed. Significantly, it is the many vital key omissions, which we will illuminate in this article, that have weakened Britain's future security. Massive capability gaps will leave Britain dangerously exposed to full-scale mass kinetic warfare within the next five years and, once more, to the lottery of war through failed deterrence. In this regard Boris's statement that  “prizes will go to the swiftest and most agile nations, not necessarily the biggest.” is 100% incorrect, as China is both agile and massive. This report shows that we have made our armed forces smaller and weaker, as we have been far from agile or swift. Meanwhile both China and Russia have made a public statement about the aggressiveness of the PM's rhetoric and the Review. In reality, their analysis of the UK’s future military projections would have warmed their hearts and emboldened them to believe Britain has taken itself out of the commitment for full-spectrum deterrence, thereby increasing their options and thus the likelihood of their aggressive future actions.

Next Part 3; The  Failures of The UK  Integrated Strategic Review