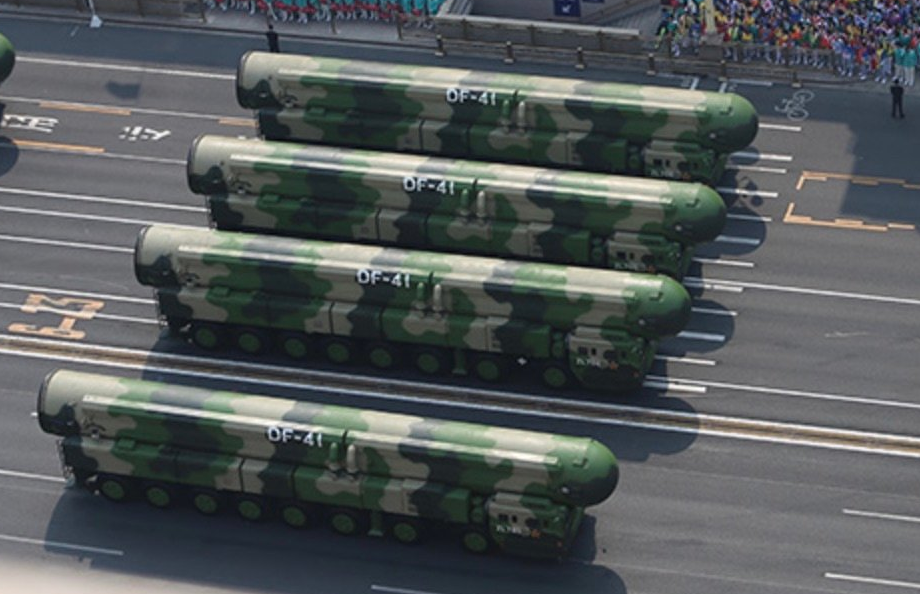 China's ambitions to become the new global hegemony are now clear to all, and are very well developed with respect to the expansion of its Navy and tactical missile forces. Surprisingly it has neglected its strategic nuclear capabilities, operating only 300 nuclear warheads until recently. According to the best current estimates, China has up to 90 inter-continental range ballistic missiles (66 land-based ICBMs and 24 submarine-based JL-2 SLBMs) not counting MIRV warheads. This compares unfavourably to either Russia or America, especially as its SSBNs are noisy and a generation behind those of America and Russia. As such they could easily be destroyed by American Hunter Killer submarines. It seems unlikely that this technology deficit will be closed in the next decade. This deficit in a PLAN second strike nuclear capability must be of great concern to  Xi and his Generals, but also should be a concern to America and Russia as it places China into a 'use it or lose it' hair trigger mode with respect to its land based nuclear ICBM force if it perceives that an attack is underway. The only obvious way to address this weakness would be to expand the PLAN's land based strategic rocket forces to a size much larger than those maintained by either Russia or America. This means expanding both the silo based and mobile arms of the PLAN strategic rocket forces. Indeed, last year, Hu Xijin, an influential editor-in-chief of the Global Times, a party newspaper, argued that the country should expand the stockpile to at least 1,000 nuclear warheads.

This PLAN strategic imperative is now manifesting at least two known new missile silo complexes that  encompasses areas of about 800 sq km (308 sq miles) near the desert near the city of Hami and near the ancient Silk Road city of Yumen, also deep in the country’s interior. The two new sites constitute “the most significant expansion of the Chinese nuclear arsenal ever”, wrote Matt Korda and Hans Kristensen, researchers at the Federation of American Scientists

However, the recent announcement of at least two new missile fields under construction in China, each with between 110 and 120 missile silos, should not come as a surprise. We would should expect an ultimate  force of some 1000 missile silos for their new 15,000 km range DF41s to be the PLAN's target allowing China to deter both America and Russian simultaneously. In addition to nuclear armed DF41s, if our Red Lightening thesis is correct about using such long range missiles armed with hypersonic glide weapons to sweep the sea clear of Western warships then we will see many thousands of silos and DF-41 missiles (top image)  being constructed by the PLAN over the next few years. This will take place at a breath-taking speed that will amaze and alarm both Russia and America.

The increased PLAN focus on its strategic nuclear forces and consequential security that its future  enhanced forces will bring in deterring a American nuclear attack, will in turn give Xi and the CCP the confidence to threaten it regional neighbours of Japan and Taiwan with tactical nuclear strikes. This will be a re-run of the nuclear dynamics and arms race seen in the early stages of the Cold War, one that forced Britain and France to ask the question 'Would America would risk its homeland to a nuclear war in defending Europe from the USSR? The reality was that Britain and France, under such circumstances, could never rely on America to do so and thus developed their own nuclear weapons that filled a dangerous strategic crack that the USSR could have exploited. In so doing they  made MAD stronger as the USSR had to cope with not one but three nuclear capable adversaries.

Today, nuclear history is repeating itself with Japan finding itself in the same position as Britain and France once did. However hard it may be to contemplate, Japan and even South Korea (in an era when Biden unilaterally pulled out of Afghanistan despite his allies wishes to the contrary) may yet soon be forced to develop and deploy nuclear weapons to secure themselves against Chinese aggression to prevent the third detonation of a nuclear weapon on Japanese soil.

This strategic gap of vulnerability between America and Japan and the use of American Nuclear weapons to defend Japan is something the CCP is now seeking to openly exploit as demonstrated by a recent social media video that has been widely shared in China after it was originally posted to the official social media account of a local municipal authority run by Communist officials having being created by a Chinese military channel with over two million followers. The video bluntly calls for "continuously" striking Japan with nuclear weapons should it continue supporting Taiwan's independence aspirations. "If Japan intervenes in military affairs to reunify Taiwan, I must recommend the 'exceptional theory of nuclear strikes on Japan,'" the video's title reads.

Following our recent Murrinations UFOs and USO's ; Some very Big Questions and UFOs; The Reality That Humanity Is Not Alone there is an additional factor to be recognised based on the relationship between UFO's and Nuclear weapons, as evidenced by the multitudes of US and Russian military sightings in proximity to their nuclear weapons platforms that extend back to the start of the Cold War. Consequently, it would be logical to assume that as China expands its nuclear arsenal, it too will encounter a similar increased incident rate from currently reported levels of UFO and USO sightings. The question then has to be at what stage might all three nations start sharing information on a phenomena that potentially makes inter-nation warfare  irrelevant?