The Olympics as a predictor of geopolitical power: Part I Competitive games and rising empires 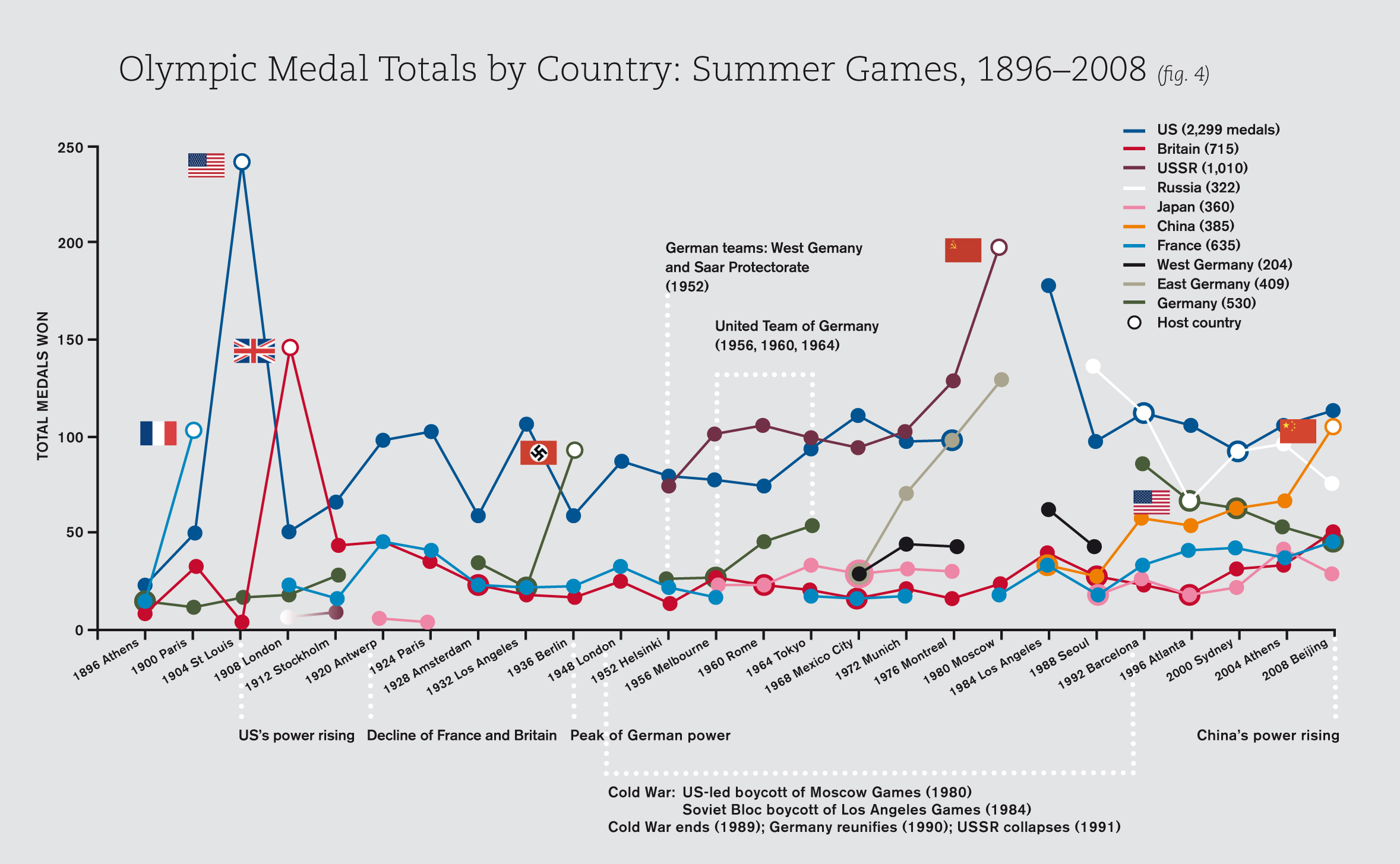 In humanity’s ancient past, survival was the key focus; but we are social animals, and fights would have occurred in order to resolve differences between members of a tribe. However, struggles to the death would weaken a tribe by depleting its members. Thus, we can speculate, the notion of ritualised competition as a safe channel for aggression must have arisen. With the later advent of weapons, the need to train for their use in a non-lethal way would also have been necessary. Mock combat scenarios would have evolved into sports, begetting, in turn, the first champions. The key intention underlying sporting contests would always have been to strengthen both the individual and the tribe, and to harness the competitive emotions of individuals within the tribe for the greater good. Indeed, the Greeks integrated sport into their culture, and resolved differences through competition among champions.

Prior to the industrial age, sports were linked to the development of skills required in combat, so warriors could train and channel their aggressive tendencies in a less destructive way. In the past 100 years or so, however, noncombat- oriented sports have grown exponentially around the world. Sporting activities provide a peaceful outlet for national energy and its expression, and, as such, a country’s performance in international competitions is linked to its status in the pecking order of empires. Sports are a microcosm of geopolitical dynamics, and as such they can offer important insights.

The choice of a national sport is often representative of the values of the parent culture. Gladiatorial combat, for example, was an expression of Roman ideals prizing expansion, strength, honour, courage and skill at arms. Similarly, American football is a complex team game fit for a warlike, industrialised country, a sport of violent struggle reflecting the history of a nation forged in battle. (It can, in fact, be seen to follow on from the rugby of its former colonial masters.)

For Britain in the nineteenth century, as the world’s greatest maritime power, yachting was unsurprisingly considered the sport of kings. Naturally, the Americans competed in yacht-racing contests with Britain, and, perhaps remarkably – although not when considering sports as geopolitics – Germany was also a keen competitor. The Kaiser funded the German yachting programme with government money, and he viewed the contest as an expression of the growing national pride and expansionism of his country. This was representative of the first stages of Germany’s aspirations to challenge Britain’s navy by building one of its own.

During the Cold War, military and economic deadlock was echoed by the Olympic Games, with the US and the Soviet Bloc locked in a race for medals to establish moral and symbolic dominance. (See Figure above for a tally of medals by country.) Over the past two decades, the world has been witness to the ascendance of Chinese athletes, a sign of China's growing economic success and imperial ambition.

Countries with broad-based, competitive and successful sports teams may well indicate in this way that they are in the ascendant phase of an empire cycle. The 2008 Beijing Olympics were thus perfectly timed to herald the rise of China; both the magnificence of the venues and the country’s results in those Olympic Games seemed to underline the point vividly. Indeed the rise and fall of Olympic fortunes for nations provide a powerful geopolitical indicator of the growth or contraction of a nation.

The 2016 Rio games are a perfect example and tomorrow in Part II we will elaborate on this most recent update and analyse the number of medals each country won.

Tags
The Olympics
Category
The Fuel of Modern Empires