The Trump Reset: Part II America on the Empire Curve and how it will shape Trump's policies 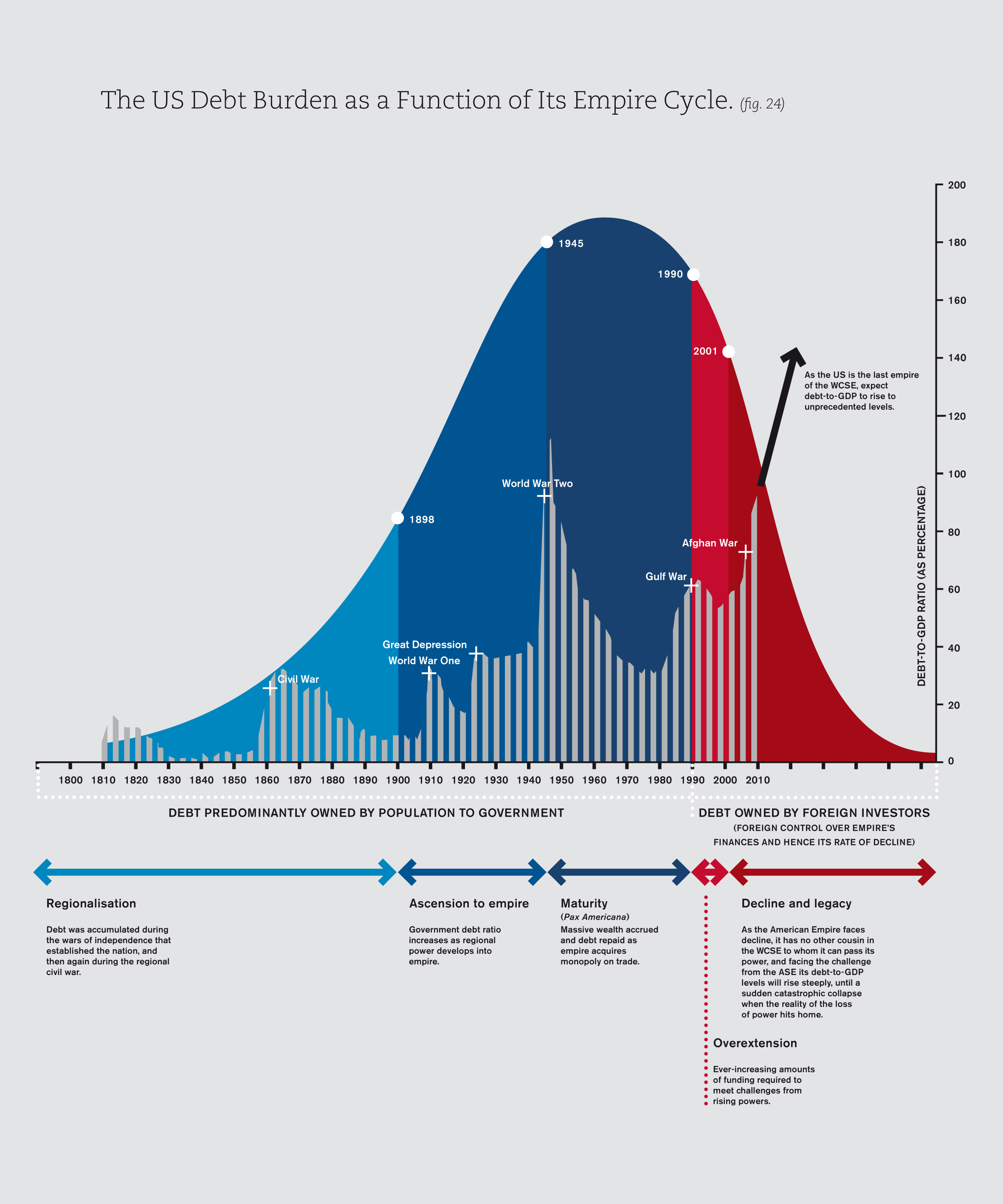 One of the core conclusions in Breaking the Code of History is that America, as the last empire of the Super  Western Christian Empires entered the last of the Five Stages of Empire in 2001. That last stage is decline, which started with 9/11 and has been building momentum over the past 15 years.

Initially, only the most perceptive observed this process. However, following 8 years under Obama's wealth and power distribution policies, it is now apparent to the whole world. It has become obvious by the appearance of challengers to the American sphere of control with the rise of Islamic fundamentalism, Russia’s recent challenge and most importantly, the ascension of China to super power status. Meanwhile, the stumbling US economy has been supported with QE programs for 15 years. Quantitiave Easing has created a facade that America is economically healthy, but rather, it has generated a new super riche elite that is now the focus of great resentment. The failure of the QE programs in the West and in America has been their reliance on the banks to distribute the money printed in QE by lending to the smaller and medium sized businesses and in this way, to create growth and wealth across the American social strata. However, the mass of bank regulations post 2008 and the consequent risk adverse nature of these commercial organisations has made them act as a dam to the flow of capital, to the places where it is most needed. This failure has resulted in the shrinkage of the middle and working classes that are struggling to survive. Indeed 40% of US voters have lower incomes than they did 20 years ago. These people were the forgotten men and women that Trump remembered, and so rose to power on.

It has been said that this election divided the nation, but in truth, it revealed the divisions that are only natural when a nation undergoes decline. With less available resources, the nation subpolarises and breaks down into constituent units which then compete with each other for resources. This is especially noticeable in America, because it has been built on waves of immigrants and races. Again, Trump recognised one of those key subunits and made his appeal to the White Anglo-Saxon Protestant (WASP) community. The fact that this term has taken on a derogatory connation says it all, as to how this group's collective identity has been repressed. Especially, as this was the subgroup that effectively built America in the first place. This swing was exacerbated by the Obama years that represented the rise of the underclass to power, which is again typical of the declining process as we have discussed many times before.

Whilst I am sure that all those reading this embrace the modern democratic values of Britain and America, we must remember that those values are the ones that manifested at the peak on the empire cycle in its phase of maturity which is always characterised by its relatively high level of tolerance and social integration. In terms of social dynamics however, the values and social construct that built both empires was sadly far less enlightened.

Trump's key identifier is to return America to greatness, but that also unconsciously implies that society will move backward along the empire curve, with a return of the values that existed when greatness was being forged. Although hard to hear, this value set was not founded upon equality and justice for all, but on the genocide of the indigenous Indians, the mass use of slavery and indentured labour and until recently, racism. Even in WW2, all the Japanese-American citizens were interned indiscriminately and en masse. This observation will put into perspective the divisions that have appeared during the election and the context and drivers behind Trump's polices. This insight will allow us to make predictions of policies as yet not articulated by the President-elect.

In the third and final section we will look at the expected polices of the Trump Reset.

That all makes good sense. It will be interesting to see if Trump really is going to deal with the nuclear ambitions of Iran. That could be very messy.

What can it change?

Fascinating insights, as always. Has an empire in decline ever reversed the process? The final paragraph suggests Trump may wish for a return to the values, unpleasant as they may be, that gave the USA the status it has today. I am hoping the third post may explore not only the policies to expect, but also the likely outcomes. My understanding from BTCH is the decline of empire is a one way course.