The US-Sino Arms Race: Space and Control Of The High Ground 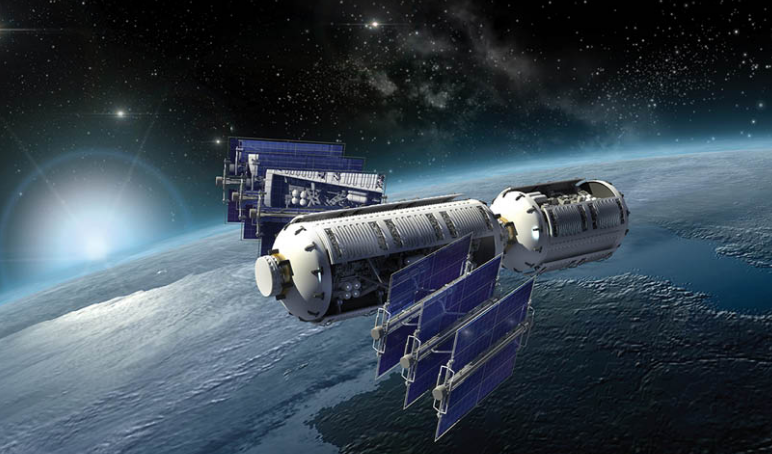 Many battles in history, have taught us that controlling the high ground has always been strategically advantageous. At the start of WW1 planes and zeppelins were used for observation and resonance. By 1918, tactical air power had come of age and proved vital in turning back the Kaiser's last offensives. Meanwhile, the first strategic bombing attacks were carried out on major cities during this conflict. By the start of WW2, control of the air proved critical for success on the ground and at sea. Indeed, the first great German reversal came at the Battle of Britain. By 1945, strategic bombing, combined with atom bombs, ultimately decided the fate of the war. As the Cold War ended, the role of space became clear in disrupting the concept of mutually assured destruction. With the Star Wars initiative, space proved it could be the ultimate arbiter of any major conflict.

When viewing such a progression, it is natural that space has become the next key battlefield as we move towards a potential WW3 with China. On top of all modern communications passing through space, it is critical for effective and continuous reconnaissance. Just as importantly, all ballistic missiles must  pass through space. As a result, such missiles are vulnerable to weapons positioned in space to intercept them. If America could dominate this area, combined with the current total domination of the subsurface domain, they will be in a strong position to deter Chinese aggression.

Until recently, space operations fell under the command of the US Air Force. However, in a milestone that recognises the growing importance of space as the vital area in modern warfare, the US recently created the 18,000 strong independent Space Force. It has joined the force structure of the US Army, Navy, Marine Corps , Air force and Coast guard. This new organisation will inevitably grow in manpower and especially in budget as it seeks to control the high ground during the accelerating US-Sino arms race. 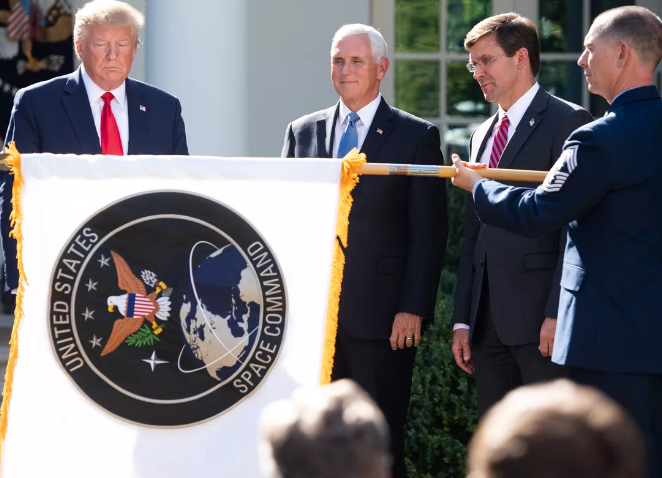 The new Logo For The space command

Inevitably, the weapons envisioned by Regan's Star Wars program, will come of age in the years ahead. One likely development will be constellations of nuclear-powered/chemical laser battle stations, that both protect the homeland from attack and also project power into other regions. Equipped with lasers and mirror defensive shields, they could be lethal to both enemy satellites and also ballistic warheads, as they travel through space (in space there is little matter to impede the laser's energy). This could create an anti-missile shield that completely changes the balance of power granted by the doctrine of Mutually Assured Destruction (MAD). A concept that worked in the Cold War, based on an an excess number of ballistic missiles with nuclear warheads, that would always get through to retaliate, even after a first strike. However, Russia's and China’s attempts to develop hypersonic low-level missiles will still be a serious concern and threat, as they would nullify the advantages of anti ballistic missiles and a space-based laser shield. However, in warfare, to every threat, there is a counter-response, and even low-level hypersonics will soon be interceptable by, faster more agile anti-missiles, lasers, and rail guns e.g laser weapons in space and mounted on F35-Bs. These could safeguard American power by providing top cover to carrier groups that are currently threatened by ballistic anti-ship missiles (like the Chinese DF-21).

Meanwhile, it is critical that the UK effectively builds a space command that is capable of rapid and independent launch to maintain communications and reconnaissance capabilities. Additionally, the future miniaturisation of satellite capabilities will reduce platform vulnerability by increasing redundancy, when some of a constellation is destroyed in a war. So again the key battle next will be launch capability. Thus the growth of private space companies, such a Space X, will continue to accelerate as Space Command requires more payloads to be delivered into space as this arms race accelerates.

Looking back at the accuracy of my predictions over a decade ago. I discussed the importance of space in Breaking The Code of History; Book Of The Present; Chapter Eight: Global Military Balance; and offer it below for context.

Throughout history, maintaining the highest ground has always been strategically advantageous. Thus, it was natural that space would become the next battlefield. High-altitude rockets made their debut in 1944 through the German invention of the V2, which was used to deliver one-tonne explosive warheads on London, silently and without countermeasures. Britain, the US and Russia rushed to acquire this technology as Germany was overrun, and their captured scientists were soon put to work on each side of the Iron Curtain in the ensuing space race.

The Russians were first in orbit with the launch of Sputnik-1, but it was American innovation that led the field in manned orbital missions and reaching the moon. This civilian technology was quickly translated by both sides into warhead-carrying missiles that were first powered by unstable liquid fuels, and later solid, stable propellants that allowed them to stand in missile silos ready to launch at a moment’s notice. It was the Americans who built warheads that could hit targets with the greatest accuracy, initially from land-launched missiles and later, in a quantum leap, from submarine-launched missiles. Thousands of these missiles were built, consistent with the concept of MAD.

President Ronald Reagan proposed the Strategic Defence Initiative or, as it became commonly known, the Star Wars programme, in March 1983. The goal was to use advanced space technology to create a robust defence of the US homeland against a massed missile attack, thus breaking the MAD doctrine forever. The modern public remember the programme as an elaborate dream, but it did have one immediate consequence, which was to force an economically weakening USSR into a new technological arms race against the growing economic power of the US, accelerating the collapse of the Communist Bloc. The challenges were huge, but the technology that was initiated subsequently spread throughout the US military, and is largely responsible for its current relative advantage. Two decades later, some of the ‘Star Wars’ concepts have been deployed in a limited capacity as a missile shield over the US

Although its defensive capacity currently only provides the US with limited protection from a few missiles, perhaps launched from a rogue state like Iran or North Korea, this is the first stage of a race to build a larger shield that only the US is running at present. As a result, it is possible to imagine that some time in the next two decades, it could become invulnerable to missile attack. This would be the first time since the peak of the British Empire when a nation could claim such security. As such, it is little wonder that the Russians and the Chinese view this development with great concern, and are dedicated to preventing this outcome

It should be said that, in the hands of the wrong country, such weapons could be disastrous. However, in the hands of a balanced benevolent state, such immunity from attack, coupled with the ability to attack with impunity, might be the one mechanism that prevents the world from launching into a future global conflict. In the context of the Five Stages of Empire model, such invulnerability would be potentially disastrous for world peace if owned by an empire in the phase of expansion, but a very different and more positive proposition for an empire such as the US, which is in the declining phase of empire – provided that it does not seek to expand its power

Today, space is a vital medium for sustaining both our modern society and our military infrastructure. The defence of vital satellites must be on the development agenda of all of these nations.

Imagine Biden & Co trying to deal with this