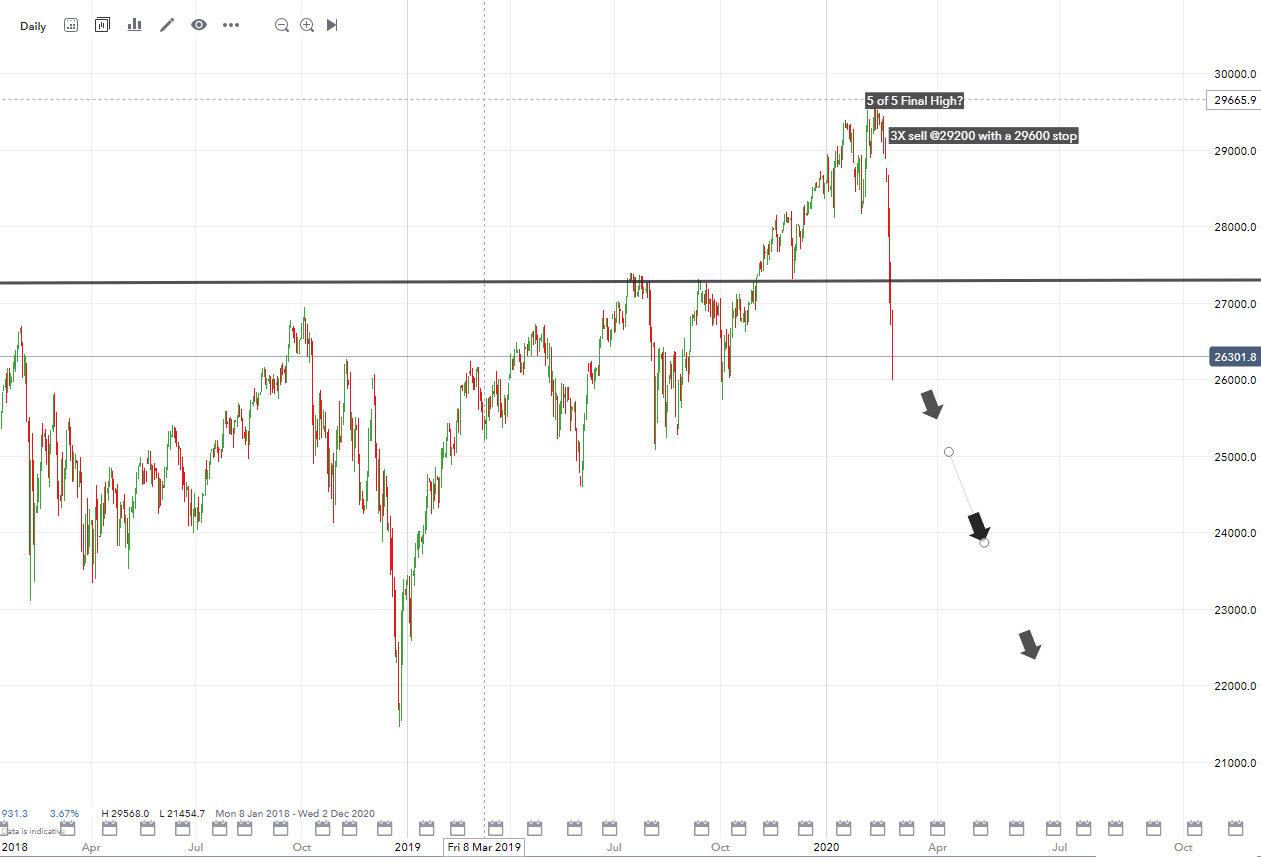 The Wuhan virus has effectively become a pandemic and is locking down the global economy block by block and the markets are slowly realising that the game is up for the habitual long, conditioned by the 11 year stock bubble. There are two underestimated points with respect to the virus.

The reproduction rate is underestimated. It is assumed it is 1.5 when in reality it is more like 4 to 5.

The death rate might be 2% when there are sufficient ICU beds. But as in Wuhan when the health care system was flooded and saturated, the death rate climbed to that above SARs which is 10% plus.

The question stands; if the Wuhan virus was just a flu like infection, then why would the governments of the world be responding in such a definitive way.

As described in THE WUHAN VIRUS MARKET WAKE UP CALL our models described how the stock markets would go from a full bull bubble to a full on bear mode. On Feb 19th 2020 the collective bull mood reached the end of its cycle. The cumulation of a decade long rally that left every one as long as they had ever been, right at the high. Once that bull bubble popped, the reality of the power of the Wuhan Virus started to do its work. Since then the longs have been clinging on hoping for a bounce to off load their positions. As markets always cause the maximum pain at times like this they have responded by dropping 11% in a straight line. Meanwhile the virus has become a pandemic and the prospect of shut downs across the world seem to inevitably point to a global economic standstill of mega proportions, at a time when the global economy was already fragile. For those looking to the central banks to save the day, they know that this will get much worse very rapidly so they will be holding off with their limited firepower for a moment when it can count.

In the meantime our conclusion is that the markets will continue to lower in an almost a straight line, as the trapped longs grit their teeth and hold on with their finger nails. The target zone is the 18400 zone on the DJI. In all probability during the last phase of this decline we will see a one day crash like 1929 or 1987 as the longs are forced to capitulate in a blood bath. Only then do I expect the Central Banks to ride in with direct index purchases, marking the start of a major bounce that will set up the next chapter of this 2020 wealth destruction process.

In situations like this where investors have been caught very long from the highs use mental crutches to justify holding their losing positions. Common ones today are:

I am a long term investor! - and even long term investors can be forced to sell deep price drops. I believe that before this is over prices on the S and P could reach the old lows of 680, a drop of some 80% which only has parallels with the 1929-1931 Bear market in America.

There will be a V shaped recovery - I am sorry but in this case think rectangle on its side!

The Wuhan Virus is no worse than Flu - so what the big deal?- Try explaining that to doctors at Wuhan who experienced the flood of patients first hand, a flood that swamped the system and caused mortality rates to be higher than the SARS virus at 10%.

Lastly Trumps reassurances, and his hope that the virus will go away with a miracle and the Vice president is the man leading the fight back, sadly do not leave me reassured that all will be well in America.

"It's going to disappear. One day it's like a miracle, it will disappear," Trump told attendees at an African American History Month reception in the White House Cabinet Room.

The President added that "from our shores, you know, it could get worse before it gets better. Could maybe go away. We'll see what happens. Nobody really knows."

As a Global Forecaster, my predictions have been vindicated by the markets movement and the trajectory of the virus.Most importantly this wealth destruction cycle is far from over. Indeed i suspect that it has only just begun. If you want to secure a pathway through the undoubted turbulence ahead, please contact me for tailored support.

My exclusive analysis could not only help you negotiate financial challenges, but enhance your profitability and survivability in the increasingly volatile modern world.