Time to Wake Up To The Threat of Russian Power Part 2: The Resurgence of Russian Naval Power 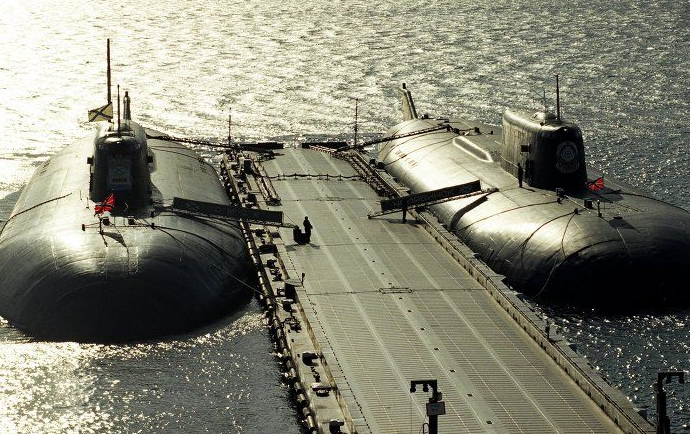 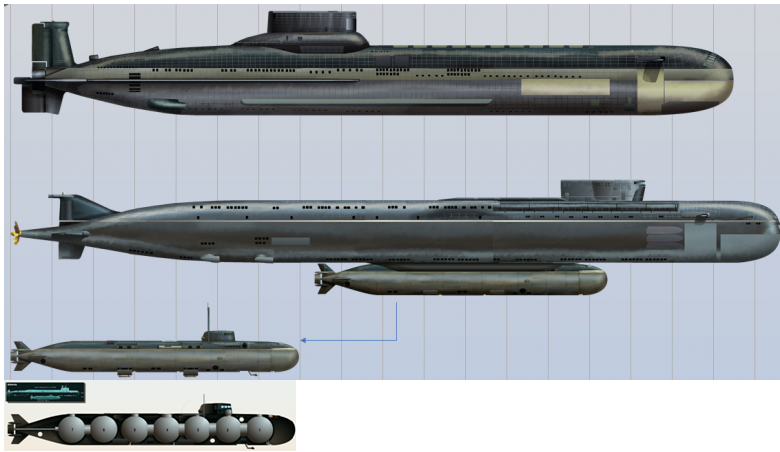 The above diagrams show the Typhoon class submarine (top), until recently the largest submarine ever built, compared to the newly modified special operations submarine Belgorod with its deep diving passenger submersible

If Putin’s geopolitical actions have demonstrated his intention, his rebuilding of Russia's military capability only adds further evidence of Russia's threat to Britain and the West. Russia’s massive nuclear missile arsenal declares it as one of only two nations (soon be three as China expands its own arsenal) that could destroy humanity.

At the heart of Putin’s global ambitions is the Russian Navy which, like other navies, is perceived to be the most effective means of projecting global power. During World War One and World War Two, Germany attempted to choke off Britain's Atlantic supply lines in an effort to destroy the war effort. Similarly, during the Cold War the Soviet Navy focused on submarine operations with the same objective; to strangle Europe. Today, Putin’s maritime strategy is no different.

The Russian fleet has been expanding in numbers whilst simultaneously evolving its capabilities with new, effective submarines and surface ships coming into service. Both are equipped with long range surface to surface as well as anti-ship missiles, some of which are/will be hypersonic. The deployment of hypersonic anti-ship missiles will shift the balance of power away from Western navies until effective battlefield lasers come into service.

The Russians have always been imaginative in their weapons development. A perfect example of this is the modified Belgorod submarine. This is an extensively modified Oscar II class (shown in the top image) adapted to become the longest strategic submarine ever built. Classified as a special operations submarine, the Belgorod possesses a multitude of capabilities including her manned deep sea 300 foot Losharik submarine (otherwise known as Project 10831) to gather intelligence and/or cut communications cables. It is also capable of launching special forces teams whilst simultaneously carrying six of the new Status 6 long range nuclear attack drones. However, the one downside to this craft is it's relatively high noise signature due to the outdated exposed propellers which consequently makes it susceptible to detection from Western hydrophones.

Undersea cables are a vulnerable element of both Britain and Americas National critical infrastructure carrying some 95% of the nations international communications. As such it seems that the Losharik which is designed  to operate at depths of 1000m, has been designed to cut or attach intelligence gathering devices to cables as they descend and ascend from the continental shelf around the Atlantic (as it does not have the diving depth to descend to the deep ocean floors). The obvious counter measures required, will be arrays of listening devices along the edge of the continental shelf, coupled with patrols provides by Hunter Killer Subs and large long endurance drones. All of which will require significant investment.

Another game changing submarine is the Khabarovsk class currently in production. These are an entirely different animal. They are based on the designs of the new and highly effective Borei class ballistic missile subs. These are the quietest submarines in Russian service. Khabarovsk will be one of four Project 08951 nuclear subs equipped with six Status-6 nuclear powered drones. Aside from being long range, these drones are also designed to evade ballistic missile defences in NATO carrier groups and littoral cities and can be used as a second strike revenge weapon. This new class of strategic nuclear delivery systems will inevitably require new defensive countermeasures along Western coastlines, especially where major cities border the sea. The obvious counter measures will be based on networks of early warning underwater listening devices and capture torpedoes laid on the seabed that can be activated to intercept the incoming Status 6 drones well away from the coast. Additionally, an effective long range coastal detection system would have the advantage of releasing the limited number of Nuclear attack submarines Britain possesses for offensive operations. The inclusion of squadrons comprising of small independent conventional subs and drones would only enhance the capability a continental shelf/coastal defence network.

Alongside this expansion of Russia's submarine capabilities, the Russian surface fleet is being supplemented by a growing number of corvettes equipped with long range land attack and anti-ship missiles that out range Western Harpoon missiles. Worryingly, the result of Putin’s military investment program is that the Russian Navy could defeat the Royal Navy all too quickly. 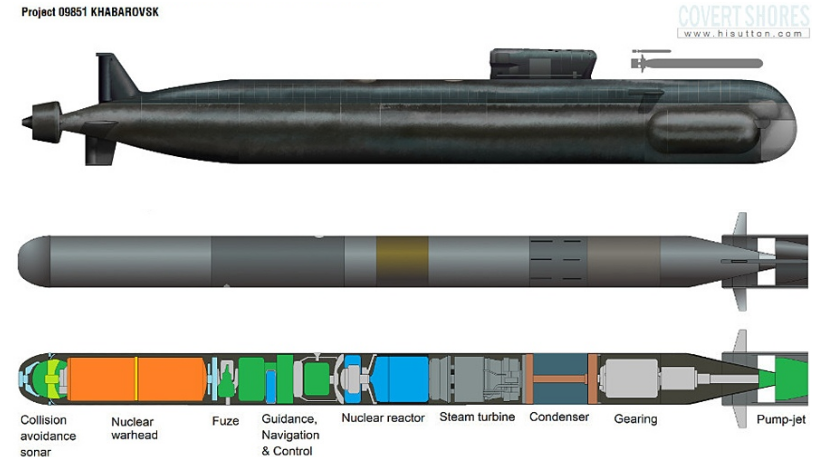 The NATO strategy to counter this expansion is the same as it was in the Cold War. They are attempting to bottle up Russian ships and submarines north of the Iceland-UK gap and then send submarines north into the safe basins from which the Russian missile attacks would be launched. Unlike Britain, America has been taking the Russian threat seriously and has reformed its Second Fleet to operate in the North Atlantic as it once did in the Cold War. However, what's missing is the effective presence of the Royal Navy whose ships once played a critical role within NATO by protecting the northern flank and Atlantic approaches. This was once accomplished with a world class Royal Navy possessing extensive anti-submarine capabilities. Only in the past month have NATO been forced to shadow 9 Russia Naval vessels in European waters, who presence was designed to test NATO's response. Notably over the past year there have been two similar forays (including one by submarines) by the Russian Navy, one reinforcing the pattern of threat. We can only hope that the Britain 2020 Defence Review chooses to invest significantly in the expansion of the Royal Navy before it becomes too late to deter increasing levels of Russian aggression.

By applying the analyses from the Five Stages of Empire, America, Europe and Russia should be considered old systems. Resultantly, as an old system but potential enemy Russia should be perceived as opportunistic rather than the innately aggressive and extensively expansive threat posed by China. Most importantly, it is Putin who provides the expansive national energy rather than the collective energy of a population in expansion. This is because Russia suffers from an older, declining population. Additionally, Russian human and industrial resource bases are certainly not equivalent to the old empire of the USSR without the agglomerated nations of that fallen Empire.

To counter this threat, the West’s strategy towards Russia should be one of containment through strength combined with simultaneous political rapprochement, much as France and Britain did at the beginning of the twentieth century. Although appearing unlikely, rapprochement with Russia would be based on the same calculation that Stalin had to make over Germany in World War Two. This rapprochement would have to include the Western acceptance Russian expansion, to a degree, into the old USSR's sphere of influence. The West’s goal in this process is to avoid pushing Russia deeper into the arms of China. I believe it is important to note that Russia and China have become far too close for Western comfort over the past few years. Of critical importance was the sharing of Russian jet engine technology with China, a step that portends badly for the long term strength of the alliance. To allow the Russia-Chinese alliance to strengthen further would be a geopolitical disaster of monumental proportions, minimising the effect of the American Pivot to the east with its goal of containing Chinese expansion. Furthermore, I believe a major obstacle to any seduction of Russia back into the Western fold is Putin’s belief that Russia’s massive nuclear missile shield would protect it against China in the years ahead.

In conclusion, strong political intention supported by military capability focused towards deterring Russian aggression has every chance of working to contain Putin as long as the Western nations commit themselves to expanding their armed forces commensurately with the Russian threat. This rapprochement with Russia should be sought from a position of strength before the next commodity bull market expands the Russian treasury to the point where Russia becomes more aggressive. During any such negotiations Britain and Europe should be at great pains to emphasise their common European heritage, including the sympathy and support Russia offered America after 9/11. Most of all, they should remember the goal is to seduce Russia back into the Western fold in an effort to surround China and denude it of a major ally.

The Russians have chosen the sub sea domain as one of their preferred mediums for imposing their maritime strategy and thus it is critical that Britain recognises and matches this treat. Notably, the only nation of the old Western Christian Empire which is on the rising trajectory of it's Empire Cycle is a post-Brexit Britain. As such, the stance it takes towards Russia and its future defence in the 2020 Review, could well influence its allies significantly as they may be persuaded to follow Britain's example to contain Russia while turning her into a potential ally. Britain's continued complacency is unthinkable for the negative consequences that will inevitably follow. The conclusion is clear; it is time to make defence and the British industrial military complex a major spending priority.