Why is there a man from Papua New Guinea on my Home Page? 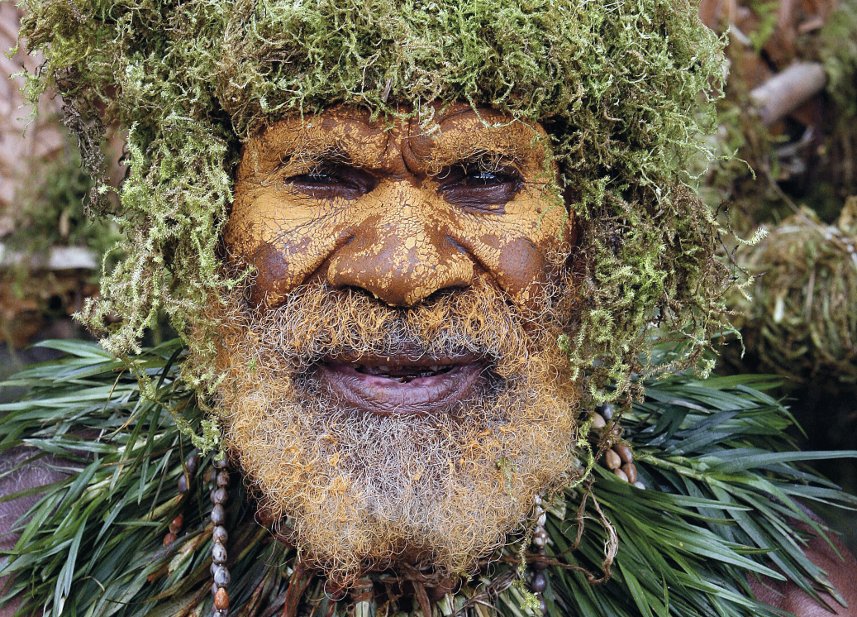 After graduating, I became a seismologist with a company specialising in forming seismic cross-sections used in the search for oil deposits. The company had twenty crews at the time, stationed in sixteen countries across the globe, and I waited expectantly for news of my first posting. One night in October 1984, I was informed by telephone that I would be catching a plane the next day to join a new crew in the Sepik River Basin in Papua New Guinea, then, as now, one of the remotest jungle environments left in the world. My encounter with the population of this faraway land would eventually change my view of the nature of humanity and history, leading ultimately to my writing BREAKING THE CODE OF HISTORY. The man on my Home Page is a Wara Tamba Masalai elder wearing a headdress made of moss.

The local population where I was posted had scarcely been touched by outside civilisation. The people lived in small tribes of sixty to a hundred, in a malaria-ridden swamp enveloping one of the world’s greatest river systems. On my first day I found myself, groggy from jet lag, standing on a jungle helipad at 7 am in a drizzle 100 miles away from base camp. Before me were sixty Papua New Guineans, armed with bows, arrows and machetes. I had a small labour-relations problem. My interpreter, who spoke Pidgin English, informed me that the men were not prepared to work in the rain. The rain was only light, and I felt the crew was testing my authority as their new boss. I replied that in my country, women and even young children worked in such conditions.

(This approach is not generally recommended in the manual on labour relations with Papua New Guineans, which was then unwritten.) First, the chief’s son, whose name was Augustine, became apoplectic with rage at hearing my riposte. Next, as though Augustine was the proverbial pebble thrown into the pond, ripples of anger spread to the other men, swiftly generating a level of hostility so strong it was almost palpable; I believed they were about to kill me there and then.

I have no doubt these warrior tribesmen would have responded with fatal violence had I wavered. I walked through the baying mob, holding my head high and locking eyes with the most threatening man ahead of me, as though my will was overpowering his. I retired to my tent, ignoring the continuous stream of physical and verbal abuse. After three hours, during which time I amused myself by writing what I believed to be my last thoughts to my family, I emerged to find that the scene had transformed to one of general bewilderment and calm. Six hours after that, it was as though nothing had happened: miraculously, I was still alive. This kind of scene was played out many times over the next six months across the survey area, and after witnessing numerous such incidents, I began to reflect upon and develop a theory of collective tribal consciousness based on the following three observations:

1    The emotions of a single person could be transferred to the rest of the tribe, such that his anger directed towards an entity outside the tribe would resonate in the rest of his kinsmen.

2    The emotions of the tribe appeared stored in a similar way to the charge in a capacitor, with an initial high level of intensity that dissipated over a few hours to a point where the majority of the tribe had forgotten the original grievance.

3    The extremity of this behaviour could be attributed to the lower threshold of individuality that existed within the tribe, as the result of its nature as a small, interdependent community.

I felt privileged to be witnessing what I believed was the human state as it once had been, thousands of years in the past. This imperfect conclusion was only an illusion, however, and it would be shattered years later.

In 1986, after two years in the jungle and significant deterioration in my health, I decided it was time for a change of career. Via one of those strange twists that occur in a life, I ended up on the trading floor at J. P. Morgan. My first observation was that I observed levels of emotion at work that seemed disproportionately high, especially to one who had been in a few tight squeezes where lives were at stake. It dawned on me that I had seen such behaviour like this before: among the tribes in Papua New Guinea. Suddenly, there it was – the shocking realisation that today’s human beings had not developed as far as I had believed. We were, in fact, still tribal creatures. It was just that the boundaries of the tribe had become so much larger and more complex that we did not readily perceive them anymore.