Will the American Empire last for a 1000 years? 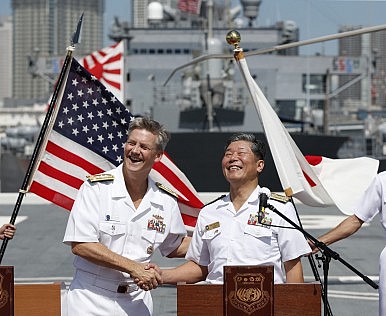 Over the past couple of weeks two events have left me laughing for at least ten minutes afterwards. The first was watching the Shadow Chancellor Ed Balls lose his seat in the election, which was universal justice at work for all the damage he had done with Brown to the nation’s finances. Whilst the second was a comment at a charity ball that the American Empire would last a 1000 years.

Now, I could have understood such a sentiment, back after the wall collapsed and the First Gulf War ended. Or even just before 9/11. But to propose such a belief today seems preposterous. Indeed, looking at the state of American power as they invaded Afghanistan and Iraq, and comparing it to today, there has been a massive decline in American global power. Actually, if one extrapolates that decline forward a 1000 years, America will have the power base of Bermuda. However, as expressed in BTCH this process is cyclic rather than linear, so there is no doubt that America will remain a force in world geopolitics, but not the dominant empire.

Alliances are an integral part of human affairs. Dominant empires enter such relationships to strengthen their position, but there is a great difference between entering into an alliance to optimise one’s position and an alliance without which the empire will be significantly threatened. The latter is specifically the hallmark of an empire in decline.

I am reminded that from 1805 and the Battle of Trafalgar to the beginning of the 20th century the British Empire in its most dominant manifestation did not need any allies as it maintained the Royal Navy that was large enough to fight the next two biggest navies simultaneously. A strategy known as the two-power standard. However, when Germany sought to challenge Britain’s navy in the first decade of the 20th century, and especially after the dreadnought revolution to the outbreak of WW1, Britain was stretched to its limits to maintain its dominance. One of its strategies was to turn to an alliance with Japan that commenced in 1902 and that had ended Britain’s policy of splendid isolation with the purpose of preventing Russian expansion in the region. This alliance was renewed and expanded in 1905 and 1911 and allowed the Royal Navy to focus on the German threat in the knowledge that the Japanese navy would patrol its surrounding Asian seas. It is little known that Japanese naval officers suffered casualties aboard British ships at Jutland, and Japanese ships subsequently operated in the Mediterranean during WW1.

Cooperation between the US and Japan has always been strong. Indeed, the US navy ensured the security of Japan in its pacifist post-war recovery phase. As predicted in BTCH, the threat of Chinese expansion would meld the two nations into the current tight military pact. This has now come to pass with Abe’s recent visit to the US formalising an alliance in which the Japanese military role is extended way beyond its own territorial waters, in partnership with the US. Just another sign that the American Empire in its current form is on the wane, and will not last a 1000 years, or even 100 years or even 15 years.