Winston Churchill - Not just the greatest Briton Part I 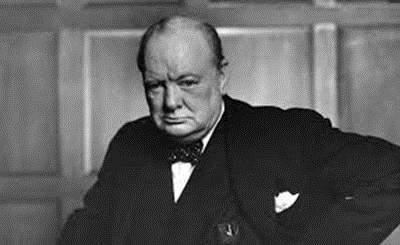 I should first declare my hand when I say that my first son is called Winston (certainly not after a drug dealer in the Caribbean!) and my second Horatio. Whilst I would consider Horatio Nelson to be one of the greatest heroes of the British Empire, Winston Churchill was so much more and for me he was the greatest hero of the Western world. Quite simply, if Churchill had not risen to power in the dark days of 1940, politicians like Halifax and Chamberlin would have presided over the capitulation of Great Britain to Germany, which would have emasculated Britain in a form such as Vichy France and which would have undoubtedly subsequently been subsumed into the Third Reich.

With Western Europe secure, Germany would then have attacked Russia earlier, in the spring of 1941, and the Russian winter would not have saved Stalingrad or the USSR. The result would have been that Nazi power would have dominated from the shores of the Atlantic to the Pacific. In time this vast industrial complex would have been harnessed, so that Germany would have gone to war with America and in all probability would have won. Imagine a world controlled by the Nazis. No democracy, No NATO and no EU, just the Nazi jackboot.

One man stood between that dark reality and the world we know now, and that was Winston. My study of his life was partly responsible for my leadership theories that I have been working on for many years resulting in some startling conclusions:

1. The first principal is that Empires manifest their heroes at specific times in the five stages of the Empire cycle as defined by Breaking the Code of History.

2. Unsurprisingly, in ascension there are many more heroes than in the declining phase of Empire. Thus, Churchill as a leader presiding over the decline of the British Empire stands out all the more.

3. The next conclusion is that potential heroes are all around us, but only when they are needed, does society allow them to manifest. The superhero stories and films that appear at economic down and turn to give society hope, are but an aspect of this process.

4. A further conclusion is more controversial, that leadership is a gene dominated process, and some of us are designed to lead whilst the majority are just not hard-wired to do so. This puts an entirely different perspective on the feudal system.

Churchill is an ideal example of what I describe as the Hero Process. After all he was the grandson of one of Britain's greatest generals, 7th Duke of Marlborough, a brilliant politician and the son of Lord Randolf Churchill who was Chancellor of the Exchequer (a role Winston also occupied ) and a very influential mother, Jennie Jerome, an American socialite, who thrust Winston into the seat of power. Thus Churchill’s genes and the influence of his family allowed him to ascend to power at the right time to serve his nation.

In addition, another aspect of his birthright that made him perfectly suited to lead in the time of an Anglo-American alliance, was that his mother was American. As such he understood America in a way that few Britons of their time could. Then, we must examine his martial background. He was a man of prodigious courage and daring that has fought in Afghanistan and in Sudan at Omdurman in a violent cavalry charge against the Mahdi Army. He was embroiled in the Second Boer War where he gained fame, and then finally on the Western Front in the trenches of WW1. Churchill managed to combine his political career with his fascination with the armed forces. Thus, he became First Lord of the Admiralty and presided over the modernisation of the Royal Navy as it squared up to the German challenge in a time when naval technology underwent more changes in a short period than any other time in history. Despite his role as head of the navy, he then was at the heart of the invention of the tanks when deadlock in the trenches demanded new solutions to save lives. His Dardanelles Campaign was brilliant in conception, but executed poorly by the navy and army, and thanks to Lloyd George and his political machinations Churchill had to carry the can. Although he was returned to office in the War Cabinet as the Minister of Munitions later in the war.