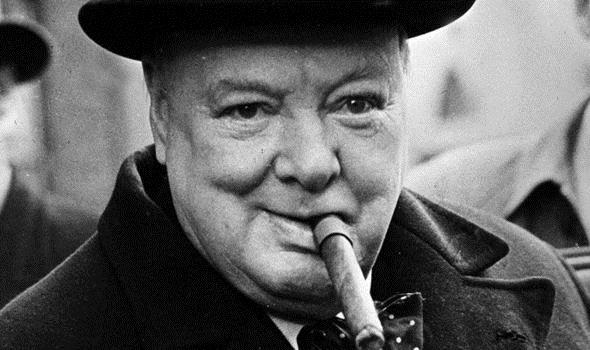 It is Interesting that whilst Churchill's greatness is now obvious for all of us to appreciate. However, throughout his career he was viewed by many of those around him with great mistrust. This especially when he took the reins of power in the great crisis of the summer of 1940 when all around him wanted to surrender. Instead of surcombing to the majority's wishes, he chose to follow his significant intellect and strategic judgement, even in the face of all those around him resisting him. This begs the question as to why he faced such resistance despite repeated past examples of his capability. My conclusion is that it was becasue the majority of the politicians around him did not have the vision, judgement or courage to follow the path he advocated. This strong streak of individualism coupled with his involvement in the country's leadership during WW1 gave him enormous relevant experience and made him the perfect war leader in 1940 to save Britain and the Western world.

Churchill personified the profile of many of history’s great leaders as a polymorph with a vast range of talents. His talents became evident at school though intermittently. He demonstrated a clear disrespect for authority (unless he respected the individual), a typical pattern of leaders in their early years. This quality allows them to operate outside the norms of society when required and enables them to find solutions that others could not create. As an adult, he was a master of English and history and wrote numerous books including not less than two definitive six piece sets on both WW1 an WW2. In 1953," Churchill was awarded the Noble Prize in "Literature for his mastery of historical and biographical description as well as for brilliant oratory in defending exalted human values". Indeed, his legendary oratory has become an inspiration for many of us till today. In addition, he published in 1956-58 a four-volume series called "A History of the English-Speaking Peoples" which he finished at the age of eighty.

He was a very talented painter and loved brickwork, a metaphor for his life’s work of building. Indeed, great leaders are always builders, i.e. they are a positive creative force that drive the creation of both physical structures and human organisations. However, Churchill’s interests were not just in the humanities which is why I describe him as a polymorph. He was deeply curious and was fascinated by technology, scientific breakthroughs and revolutions. His creative imagination quickly allowed him to see the potential of inventions way before the majority of his peers. The combination of curiosity, adventurousness and courage drove him to learn how to fly, during the very early stages of the aeroplane's development, much to the horror of those around him in. From the moment Churchill took Office as a war Prime Minister he understood that Britain was outmatched by Germany and needed to find every asymmetric advantage to ensure survival and ultimate victory. Under his command, commando raids and the use of signals intelligence were all given top priority, the foremost of which was his support for Bletchley Park and its war changing code breaking programs. Thus, with Churchill’s leadership Britain's creativity was unleashed into its war machine. One clear example of the difference between America and Britain was the adoption of a series of modified armoured vehicles to lead the assault on the beach defences. America refused this innovation known as Hobart's Funnies and suffered much more than the British forces on the D-Day Beaches.

In addition to this plethora of character traits and raw intelligence, one skill that defined Churchill, which is vital for any truly great leader is the gift of foresight. This gift allows a leader to see events that will unfold to the detriment of those he leads, unless corrective action is taken. Churchill used this skill in spades, in his ability to understand the German challenge to the Royal Navy in the run up to 1914 and to harness all his enegery to ensure that dreadnought superiority was maintained over Germany. The most famous example of his exceptional foresight was his recognition long before the majority did, that Herr Hitler intended to go to war to realise his ambitions. During that period Churchill stood as a voice in the wilderness unheeded, with the most dire consequences for Britain in 1940. Another great, perhaps less known example of his qualities was demonstrated when intelligence clearly indicated that Germany was about to invade Russia in 1941. Having warned Stalin, who ignored Churchill thinking that he was trying to precipitate such a conflict, Churchill moved 50,000 troops from North Africa to Greece. The loss of these troops turned the tide against the British in North Africa, allowing the Africa Korps to push the Eighth Army back to the last line of defence before the Suez canal at El Alamein. The campaign in Greece being a disaster, it took six weeks before Britain was ejected. However, with the threat to Hitler’s underbelly in Greece, Hitler was forced to delay Operation Barbarossa, the attack on Russia, by six weeks. This delay caused the German offensive to fall foul of the Russian winter, without which in all probability Russia would have surrendered to Germany, and Britain would have once more been alone.

Thus, Churchill combined foresight and a brilliant strategic mind, qualities that were vital in the greatest chess game of all, war. Churchill also had great empathy and emotional intelligence which allowed him to feel his people, a vital element of holding his nation together at its darkest hour. Churchill and the nation where lucky that his wife Clementine gave him love and stability and sustained him in his many dark hours when shouldering the responsibilities of war leadership. However, Churchill’s greatest attribute of all was that as Prime Minister he served his people rather than himself, a sign of true leadership. His people could sense this and hence, upon his death Britain witnessed one of the biggest outpourings of collective emotion in its history.

Churchill's life also raises a more esoteric concept. The Chinese have a concept called Chi that is the life energy of a human being which varies from person to person. However, great leaders and warriors have great reserves of Chi. Modern physics has shown that human consciousness can change the universe around us, so what is if Chi and consciousness were the same thing? Could not someone with great Chi like Churchill somehow alter the fabric of the universe around him to his will? In Churchill's case, I cannot help the feeling that there is some truth in this concept. Churchill resigned in disgrace after the Dardanelles disaster and chose to fight on the Western Front (no other politician chose to follow a similar path). Once there he took inordinate risks, going out into no man's land on patrol 30-40 times, and yet he survived against the odds. Most interestingly of all, he seems to have chosen the day of his death, having predicted it years beforehand. That day was the 70th anniversary of his much loved, if not unrequitedly, father Randolph Churchill.

When Obama entered the White House, the first thing he did was to remove a bust of Churchill that had stood there for decades. Suggesting that, sadly, he felt his presidency was not going to be one founded on ChurchillIan leadership principals. Consequently, America has been going downhill ever since. The only good news is that it took the presence of Chamberlin and Halifax to pave the way for the greatness of Churchill. So, the big question for America today is: Is Obama much like Halifax and Chamberlin paving the way for America’s Churchill?

You've certainly signalled your fondness for Churchill in a rather rich, almost treacly fashion. I wanted to share something with you that sheds a different light on Obama removing the bust of the great man. Several years ago I listened to Historian David Cannadine deliver a speech on Churchill at the British Library. Afterwards, he was asked why the British people shouldn't be upset at Churchill's bust being removed from the Oval Office. Cannadine didn't miss a beat. "I would suggest we should have been upset it was there in the first place." He went on to explain that George Bush had put it there as some sort of endorsement of the war footing he placed the country on. Cannadine went on to remind the audience that although he was associated with various conflicts, Churchill was not someone who took war lightly.