Indifference to Incompetence Linked To The Cycle Of Empires 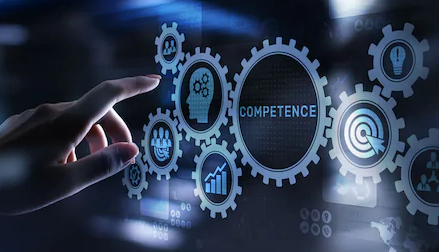 In this Murrinations Insight, I will examine the origins of Britain's indifference to incompetence towards its leaders and how I believe this passive acceptance for over 70 years is about to undergo a radical change to intolerance of incompetence.

For followers of my work, you will be familiar with my cycles of human social systems which I call the Five Phase Empire Cycle. Using this pattern recognition process, the decade lost to the incompetence of Brown, Cameron, Osborne and May was not a random event, but rather it was a 10-year retracement following the 30 years of Britain’s expansion post the Thatcher impulse in national energy. Critically, such retracements, however uncomfortable, are instrumental in social organisations to trigger fundamental reorganisations and adaptations. Future growth is then maximised by better harnessing rising national energy. This process, in Britain's case, triggered Brexit and a new global direction for Britain.

I would argue the manifestation of great and poor leadership within society is very much a function of a nation's position on its Five Phase Lifecycle. The evidence for this I discussed at length in my Murrinations series on Western leadership, which shows that the cycles of leadership in Britain and America have followed very similar paths.

Part 1: The Crisis of American Leadership

Part 4: The Time of Heroes

Part 5: Decline and the Rise of the Anti-Hero

Part 6: Heroes and Anti-Heroes of the Future

The Sub-Cycle of Indifference To Incompetence

Within the cycle of leadership is the sub-cycle of indifference to the incompetence of leadership, a characteristic of systems in decline, which is a fascinating yet predictable sub-cycle. To demonstrate this process, I have included a new curve shown below that combines the decline of the British Empire cycle with the rise of a New Global Britain cycle. Upon this has been noted key events as well as the heroes and anti-heroes of the time. 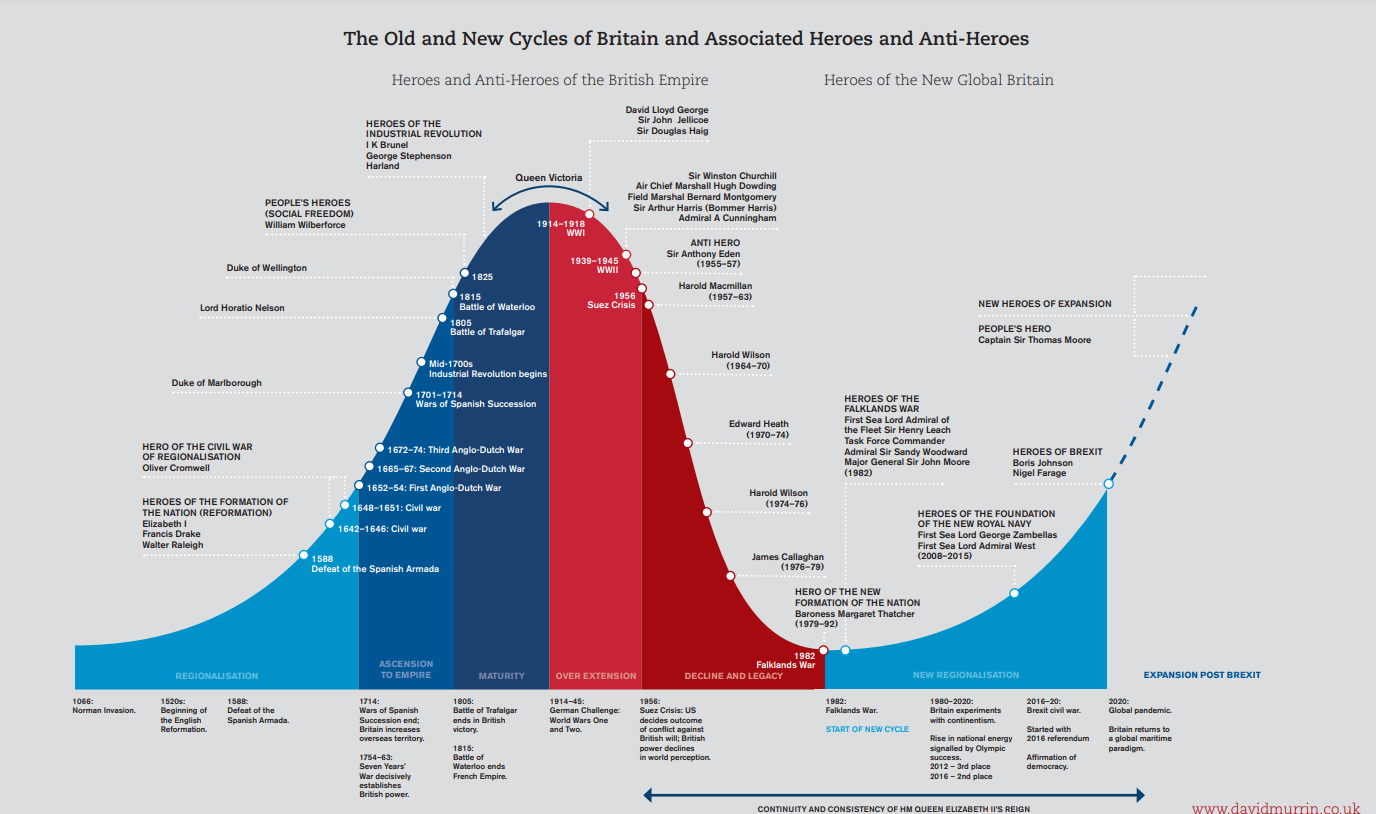 Britain's Empire Cycle From 1066 To Today

Following the path of the British Empire curve from the Elizabethan era, the growing national energy of Britain manifested a competent national and military leadership that built an empire. It was often maverick and always right-brained. Results and success were rewarded whilst incompetence was swiftly faced with execution or humiliation. Then, in the early phase of maturity from 1815 onwards as the British Empire controlled vast swathes of the world, stability became commonplace and the need for highly capable adaptive leadership gradually and imperceptibly lessened. With stability and certainty conferred by British global power, iterative leadership styles could hold their own allowing the rise of the left-brained and politically ingratiating style of leadership increasingly took the reins of power. In so doing, their first objective was to commence the process of pushing  out into the wilderness the maverick and capable leaders that had personified the energy that had built the empire, because intuitively they represented a political threat.

Until the point of decline marked in Britain by Anthony Eden, power was in the hands of weak and incompetent leaders that could not adapt or restructure the failing British Empire. Meanwhile, the rigid architecture of political parties prevented any potential right-brained maverick leader who could effect change from rising to power. The Empire continued its decline to the point where just Britain remained, divested of its imperial holdings. That period of decline, from 1955 to 1978, was a sustained period of poor leadership. Thatcher reversed that trend. Major and Blair then rode the Thatcher wave before the decade of super-incompetence under Brown, Cameron, Osborne and May.

Since 1955, with the exception of Margaret Thatcher's term in office, Britain has on the whole been governed by relatively poor and incompetent leadership. As such, the population's expectations have been dumbed down by a lifetime of experience. This has been personified by the celebrity culture that presents attraction without substance as the key focus rather than underlying capability. However, it should be said that the Queen’s moral leadership of the nation has gone a long way to counter this dynamic, providing a consistent value set that has supported collective values throughout decline and reconstruction.

The New Age Of Intolerance Of Incompetence

However, with Britain having entered the second phase of a new expansive cycle in which Britain's national energy continues to increase, I believe the age of indifference to incompetence is in the process of shifting to intolerance of incompetence in a return to a cultural expectation of success and results.

This is a social shift that is currently being driven by the twin needs of adaptation to Brexit and the response to the pandemic. Both of these have quickly revealed poor leadership in all spectrums of government, both in individuals such as Gavin Williamson in education, who has demonstrated complete incompetence in every aspect of his ministerial career, and in Matt Hancock, who handling of the pandemic has been poor. Lastly, there are the heads of Public Health England and the NHS who have failed the nation on an epic scale. This will be the subject of my next Murrinations Insight on the NHS. One can only hope the government has the courage to make a reformation of the NHS based on global best practice rather than simply cursory change.

Although Boris seems remarkably tolerant to incompetence in his cabinet, this evolution to intolerance of incompetence will be driven by a collective public mood shift which politicians will have to respond to or risk being swept away and replaced by those that are able to meet the public’s rising expectations.

Perhaps it is also time to set up a body on par with the National Statistics Office to examine competence of those that work in public office, a new Office of Competence. Its role would not be to lead witch hunts, but to examine policies and decisions, as well as learning from failures. If such an organisation is too terrifying to contemplate for leaders then a private Institute for National Competency would be the other option.

Have a look at this organisation, David, which assesses the effectiveness of conservation projects using the rigorous application of scientific evidence. It's headed by Bill Sutherland who I know well from his stints on the At Catharine's College, Cambridge, Investments Committee. He regularly challenged the lack of rigour in our investment advisers' so-called research and had them squirming uncomfortably. Transferable methodology? Probably needs funding from hedgies or maybe Rishi's mates. How do you rate Penny Mordaunt?