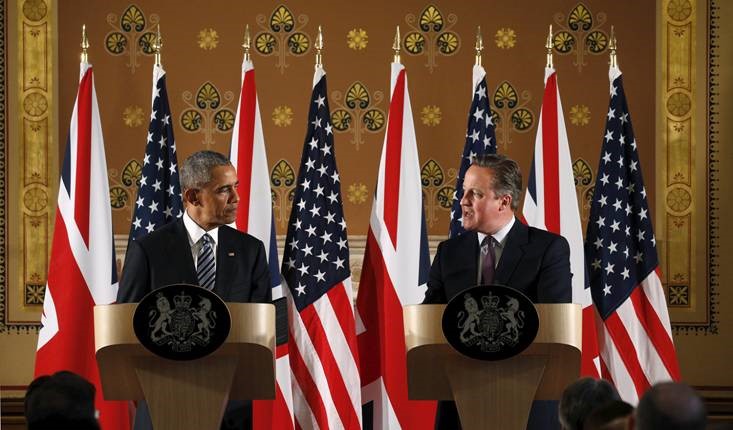 Obama’s recent visit to the UK and his intervention into the Brexit referendum represents an unprecedented American interference in British politics and will be undoubtedly proven as poor judgment by Cameron to enlist his support.

Although Britain has been slow to respond to the gradual incursion on its national sovereignty from the EU, threatening the British people with going to the back of the queue for trade in a post-Brexit deal was very poorly judged, even though Obama tried his best to justify it afterwards as procedural. He should have remembered that Britain’s national character remains that of people that do not respond to overt threats well. However, that been said, Obama’s views are of limited value, coming from a President who is at the end of his eight-year term in Office. However, his intervention does encourage a comparison between the United States of America and the un-United States of Europe, using the ‘Five Stages of the Empire’ model to better understand the fundamental differences between the two entities.

America was forged into a single federal entity after a massively destructive regional civil war in 1861-65 which marked the end of the first ‘regional’ stage of the American Empire. This new nation benefitted from positive demographics with a massive inflow of immigrants that had the living space to migrate westwards and ultimately become wealthy. Thus, the wounds of the civil war were healed by the subsequent expansion and wealth creation process. But most importantly, America had a federal and centralised political leadership creating a sense of unity that has only grown over time.

In contrast, Europe or the EU was formed after its 30-year civil war peak of the Super Western Christian Empire, which spanned between WW1 and WW2. The consequent stupendous economic drain of these great sequential wars accelerated Europe’s decline. Thus, the EU was conceived at the end of the decline of the fifth stage of empire from a legacy state under the military protection of America facing the USSR. Europe at this time, like all systems in legacy, had only weakly positive demographic drivers, while today’s demographics in the core states of Europe are marginal to negative. Most importantly, the great civil war peak was about each nation having its independent determination to govern itself, rather than expounding the vision of a pan-European political integration into the United States of Europe.

The vision of political unity came after 1945, driven by France’s fear of the fourth war with Germany which from the French perspective could only be resolved by political integration, effectively formed around Germany. The latter as youngest of the European nations, even after two wars continued to have considerable national energy, although today, Germany is now too in a state of decline and no longer able to power Europe. The French vision of political unity continues today and underlies the EU’s long-term goals. However, such expansion and integration are just not feasible. Instead, the EU is effectively in a legacy state in the context of the five-stage cycle and it simply does not have the national energy to hold together. Indeed, the post-Cold War expansion has made the EU too large and disparate, only worsening the instability with disintegration as the inevitable consequence.

Today, only the UK within Europe is in the ascendant. Sadly, Britain's attempts to change the moribund structure of Europe from within the union have been met with immovability by the other nations. Thus, the inevitable consequence will be that Britain chooses to leave the EU on 23rd  June. This will then commence the disintegration of the EU as we know it. However, it could allow a more viable European alliance to rise from the ashes centred around a stronger Britain. Once separate, Britain will create the demographic and economic attractors around which a new EU model could be formed of the breakaway from northern states. This would potentially create the most stable long-term European prognosis. Thus, Brexit could be the beginning of a new reformation of a functioning European alliance, rather than a union, based on Britain rather than Germany as its core driver.

As for Obama advocating Remain, his views are based on what the US wants and on America’s geopolitical architecture, not on what is good for the UK. He has failed to understand that the EU is structurally doomed to failure and that an independent and consequently vibrant Britain will be a stabilising influence when that happens and turmoil ensues. Notably, as Britain becomes independent once again and stronger, it will seek to renegotiate the so-called special relationship in which it has become a very junior partner. Considering that since the days of America’s post-civil war expansion, Britain was the cousin that America sought to supplant with its global empire, this would require a long-term shift in political perspective by America to accommodate Britain’s resurgence on the world stage.

Finally, at the end of Obama’s eight-year term, and in the light of the evidence that he has presided over and accelerated the greatest loss of American power in its history, should we in Britain do anything but the very opposite of what he recommends?

Obama made a fool of himself and Cameron

I think most Brits watching were so incensed by what Obama said and with Cameron grinning by his side, that this was a big own goal by the Remainians, or Innards. It was wrong at every level. But what we should be focused on now, are the truly idiotic plans to add Turkey, Macedonia, Serbia, Montenegro and Albania, yes ALBANIA to the EU. Sheer and utter madness. Anyone who wants to stay in an EU with them as members needs their head examined.