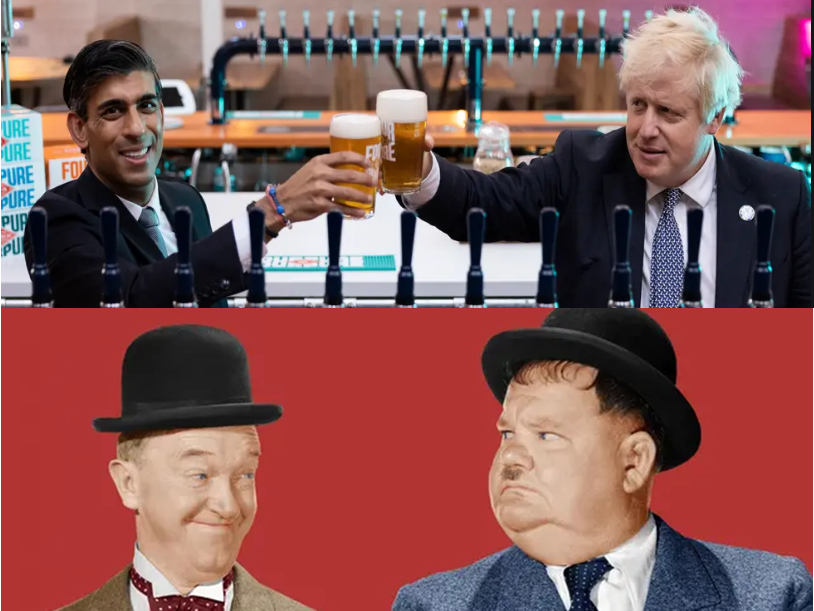 To better understand the polices that Global Britain needs to thrive in the years ahead, we need to appreciate what a system like Global Britain requires, based on our Five Stages of Empire model and specifically the UK’s current second phase of expansion to empire. The first thing to recognise is that the UK has a massive amount of coiled national energy that will be released despite poor leadership decisions and policies from the top. This means that just because the system grows, it does not vindicate the economic policies of the time. But rather the question has to be do the policies that run the economy release the maximum potential economic energy of the nation?

We have argued that Boris Johnson has unwittingly created a new form of politics, that of simultaneous wealth creation and distribution, leaving Labour out in the cold as an irrelevance. The concept behind this is to spend on the poor areas of Britain and to upgrade them, as once the reunion of Germany did for East Germany. This is both laudable and politically expedient. However, its seems Johnson and Rishi Sunak have gone overboard on the spending and forgotten the key aspect of simultaneous wealth creation, without which they will fail to manifest the full potential of the construct of Global Britain. Luckily, there are clear examples provided by applying the lesson of the Five Stages of Empire to Britain’s second-stage expansion today. 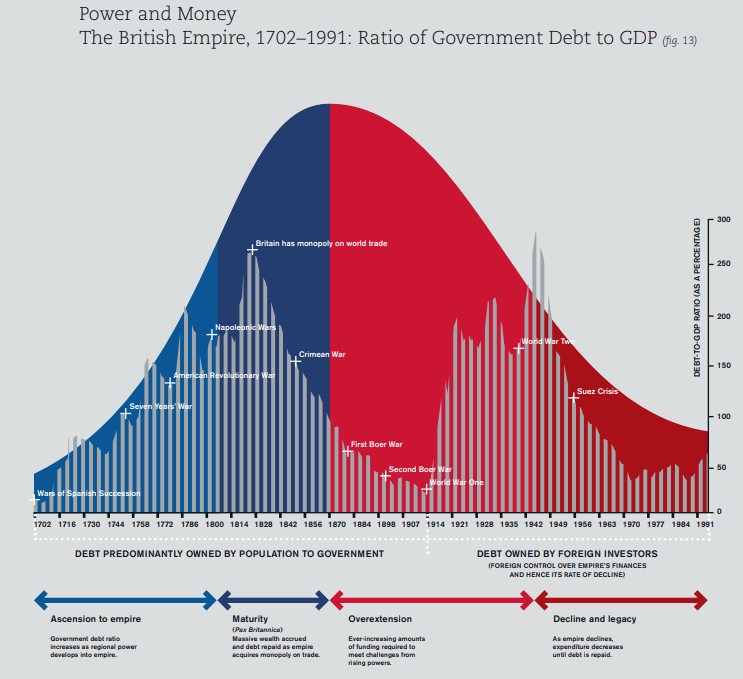 The above diagram shows the cycle of debt in the British Empire. Global Britain is now in the second phase of the cycle where debts should be expected to increase and a new economic model is established that facilitates a significant expansion of national revenues.

Debt levels. In the second stage of empire, national debt levels always rise significantly through borrowings that are predominantly from the nation. Both Britain in it last cycle and America showed very similar debt expansion curves in their second stage. So, the increasing national deficit in the case of the UK is consistent with this part of the cycle. However, the key issue is what that money is spent on. Nations in decline use debt to just maintain their status quo, which only delays their collapse. However, nations in expansion use their borrowings to create long-term strategic advantages that then create wealth, that then ultimately pays off that first mound of debt. As such, every penny spent should transfer into a long-term plan of strategic advantage, otherwise that increased debt creates drag. Thus, it is critical that spending is visionary and prudent in the way that it is used to maximise outcomes. Sadly, this is not yet a hallmark of Johnson’s government as he blast pounds out of his spending blunderbuss. 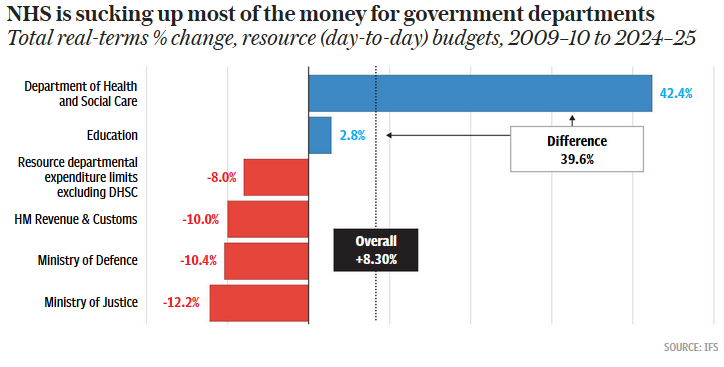 Consumed by healthcare. The demographic trap of an ageing population, that increases its need for care whilst lowering its revenues, means that health and social care consume an increased share of the UK national budget at the expense of other vital areas such as defence. However, instead of throwing more money at the problem to compensate for poor performance and cost-effectiveness, this sector of government policy needs fundamental reform. These include a top-down either fundamental reform of the NHS in its organisation, or  announcing its demise and changing the current healthcare funding system, from tax funded (thus lowering taxes in the process) to the more common mechanism in Europe, of insurance with co-payments by the government for the poor. Promoting efficiency by giving patents the choice as to which GP/ consultants and hospitals they attend. Whilst simultaneously encouraging self-responsibility, by adding premiums to habits likes smoking. Lastly, to initiate a drive to prevent disease, by encouraging self-responsibility for health, with new national programmes for wellbeing based on exercise, weight control and gut health. These combined measures would increase national productivity through enhanced national vitality, and would release health care funding, that could then be harnessed to expand the economy, and thus further lower the relative burden of health on GDP. No such programme has been mooted by the Government.

Spending on creating strategic advantage. Traditionally, spending has been based on infrastructure that facilitates a more productive economy. Today a prime example would be  investment into a new national energy complex away form fossil fuels. But most significantly it has traditionally been spent on armed forces to expand economic influence overseas and thus increase the revenue base of the expanding nation. In that regard, the UK's defence spending today is completely inadequate and negligent, before we take into account the clear and present danger of Russia and China as they arm themselves to the teeth. This is a clear and very dangerous point of failure of Johnson’s government.

Creating a unique economic USP. Successful empires, as they rise, create a unique set of economic conditions to fund that expansion. The British Empire’s wealth was founded on being the greatest maritime trading nation the world has ever seen. To be successful, Global Britain today needs to emulate that paradigm as far as possible, allowing for a different geopolitical landscape. So the enticement of British-flagged ships back to the UK through tax benefits was a stroke of genius and shows that lateral thinking does exist in the Treasury, in at least thimbleful measures. However, the key to the future, as Johnson has stated, will be to construct a scientific superpower that can create and manufacture all its visions. Whilst Britain has creativity in abundance, it needs access to massive and accessible investment to unlock its potential. 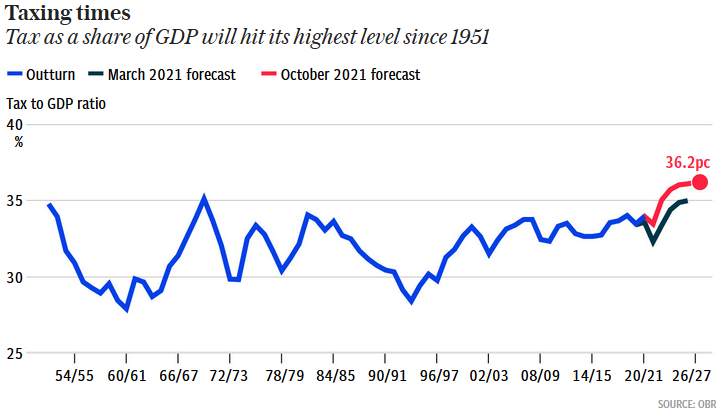 The desperate need for a low-tax regime. To maximise private investment and reduce the need for more debt and government investment, the UK requires a fertile investment regime; one that would be easy to create by simplifying the tax code and moving over five years towards a single flat tax regime of 20%. Not only would this encourage growth of new companies, but it would poach mature, revenue-producing companies to UK shores and expand the economy at an accelerated rate. Even if there were revenue gaps in the transition process that increased debt, the long-term advantages would power Britain forwards for the next five decades. In stark contrast, Johnson and Sunak are now levying the highest rate of net tax on the economy of any government for decades, with justifications that are straight out of Labour’s playbook. It’s a guaranteed path to encouraging lower growth than if a low-tax regime was to be implemented. One consequence of increasing inflation will be that as prices and incomes rise, so more people are drawn into paying taxes from which they were previously exempt by moving into higher tax brackets than before. As inflation rises, while tax thresholds mostly remain unchanged, so the overall fiscal burden becomes more onerous without the Chancellor having to lift a finger, slowing down growth. The positive tax gains to the nation of fiscal drag would provide the ideal environment to shift to a flat tax regime.

Escaping the stagflation tsunami.The need to create a low-tax, high-growth economy is not just based on the need to maximise Brexit and the expansion of Global Britain, but also because the UK and the rest of the world face a massive wave of inflation in the next four years that will be of a higher magnitude than the 1975 peak. The result of which will be stagflation and negative real growth that will induce the most traumatic social outcomes.

Whilst America and the EU are locked in the paradigm of decline, and for them the outcome of economic collapse is inevitable, Britain’s Brexit gave it the ability to choose another path of high growth. That option is being squandered by Johnson and Sunak through lack of imagination and boldness. Which means that instead of the ‘Roaring Twenties’ promised by Johnson at his election, this decade in the UK could become known as the ‘lost decade of stagflation’, in which real incomes continue to go into reverse at an accelerating rate. A guaranteed route to Johnson becoming very unpopular indeed.